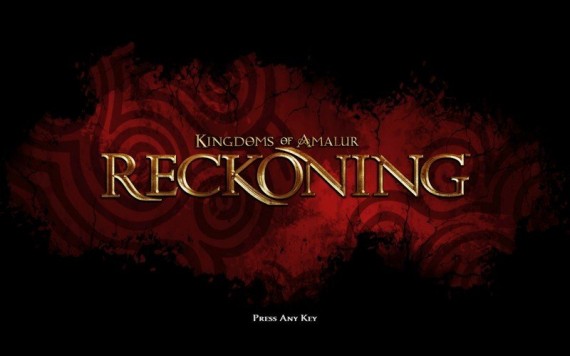 What would happen if you mixed the world scope of Skyrim with the combat system of God of War and the level progression of World of Warcraft? Chances are, you would get something not too far off from Kingdoms of Amalur: Reckoning. Tying these elements from three blockbuster franchises together sure sounds like a recipe for success, and when it works, it’s fantastic; but when it doesn’t, it’s like a belly flop into a pond of freezing water. What does it mean for you, the gamer? Read on to find out.

Reckoning opens with you, the recently deceased, being dumped into a pile of bodies. Strangely though, you aren’t quite dead enough to fit in with the pile. You awaken and are tasked with finding your way out of an early grave. During this escape, you learn that you are the first successful test subject to be brought back to life using the Well of Souls, a device designed to eliminate the fear of death by a group of gnomish inventors. Your memory is gone, and it appears that the land’s Fateweavers (those tasked with reading the fate of all life forms) are completely unable to determine a fate for you; it’s as if you aren’t real. 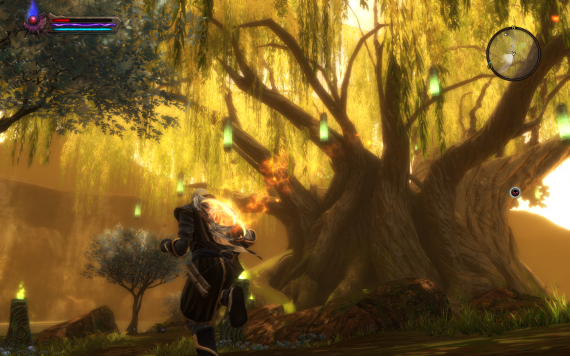 With that realization, you’re let loose into the world. A world that is simply gorgeous. It’s as if the stylized graphics from World of Warcraft got a modern graphical overhaul and a fresh coat of paint. The lush, detailed environments provide ample eye candy, and every variation on towns or atmosphere makes the game a joy to look at. Sadly, the beauty seems to be only skin-deep.

One of Reckoning‘s biggest flaws is its complete lack of personality. Every character is instantly forgettable, and the quests are run-of-the-mill WoW knock-offs. It’s pretty clear from every aspect of the quest system that the folks at 38 Studios were pretty big WoW fans. However, the difference is that WoW has Blizzard staff fleshing out all of the game’s lore, as well as a substantial back catalog of games to build on. Reckoning struggles to find its identity at every point, and while it’s entertaining, it’s difficult to stay invested in any of the game’s characters or storyline. 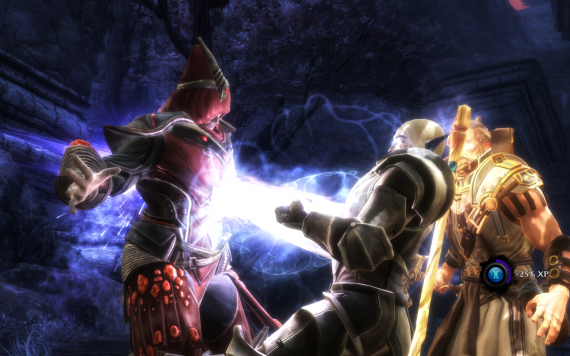 Thankfully, what the game lacks in personality, it makes up for in gameplay. While some of the side quests are convoluted or simply monotonous, the combat itself is a joy. In my play time, I focused on magic use and the chakram: a medium-range circular death blade, most famously used by Xena: Warrior Princess. I originally wanted to play with staffs, but once I’d received a set of chakrams, it became obvious they would be the best option for a magic-focused character. The combat borrows heavily from a number of third-person action games, most notably God of War. There are two different attack types, primary and secondary, and each can be deployed with a charged variation. It can turn into a button mashing party to dispatch larger groups of baddies, but the ability to alternate attacks makes for interesting combo opportunities.

Sadly, the combat lacks any kind of targeting system. When surrounded and being knocked around by enemies, it would be wonderful to pick out who you’re trying to kill. Combat is manageable as it is, but not being able to lock on to who you’re attacking becomes needlessly frustrating. 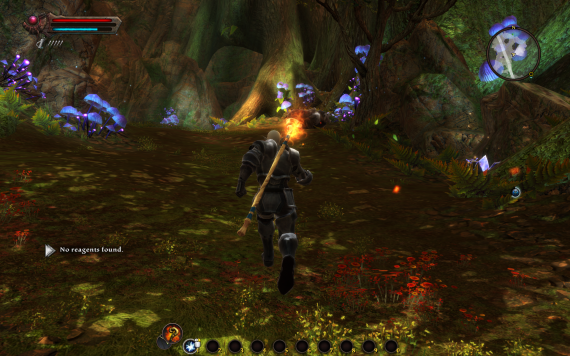 On top of a great combat system, the controls are tight and responsive. The controls should be instantly familiar to anyone who’s played WoW, and players can seamlessly switch from keyboard to a connected gamepad, if they choose. I felt the 360 controller was a better choice based on the combat system, but any longtime RPG player will be right at home with their keyboard and mouse.

The biggest drawback, however, is Reckoning‘s complete lack of multiplayer. With a quest system so closely modeled after WoW, the game suffers from being stuck questing alone or with a computer-controlled minion. Doing things like fetching four antelope heads is tedious enough when you have an actual human partner or group to keep you company, but doing it alone becomes downright mind-numbing. Adding in the fact that many combat situations pit you against large groups of monsters, some sort of multiplayer team setup would be a welcome enhancement.

What all of this boils down to is that the game is decidedly mediocre. While a joy to look at, it’s a bland setting with a complete lack of personality. Even writing this, I have trouble remembering a town name or important NPC in the game without first looking it up. The combat is fast and furious, but also completely frustrating without a targeting system. Reckoning wants to do too many things at once and suffers because of it. With a little more focus, it could have been a fantastic experience, but as it stands now, I’ve already lost any interest in replaying the game. Unless you’re a hardcore RPG fan or you want a single-player WoW experience for some reason, you probably want to pass on this one. Overall, I give Kingdoms of Amalur: Reckoning 5 out of 10 spinning chakrams.