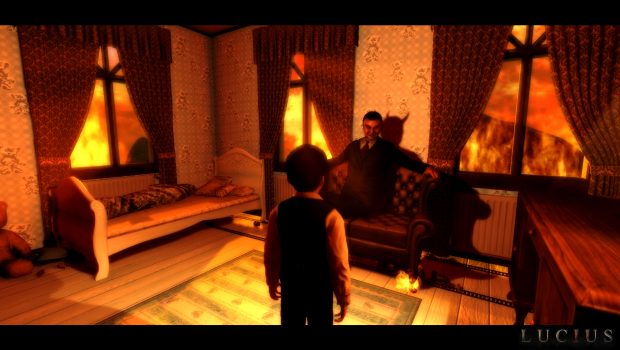 This guest review is brought to you by KBMOD community member AjayLikesGaming. If you like this review, make sure to check out Ajay’s video content on Twitch and YouTube.

Dishonored has come and gone, and Hitman: Absolution is still a while away. So how am I meant to fill my urge to murder people in the most creative ways possible? Well, the answer may just lie within Shiver Games’ new release, Lucius.

Traversing the great Dante Manor, you take control of young Lucius, a child born on the sixth day of the sixth month in 1966. Born into a family of wealth and power, Lucius is the ideal starting point for Lucifer’s plot to take over the world. On Lucius’ sixth birthday, Lucifer appears to the boy and explains his plot, then aids Lucius in the killing of his first victim.

The game is broken up into 18 chapters, each covering a single victim based in the manor house. To fulfill each kill, you must explore the vast mansion and search its many wings to find clues and methods of how you might take on the victim. The game gives you a relatively simple quest log in the form of Lucius’ diary, along with a map that will guide you in the general direction of your goal.

It’s not just a simple case of following a quest marker, however. The map may guide you towards a location, but often you’ll find yourself exploring all over the mansion in search of items you may need to take out your target. Luckily, if you find yourself doing frustrating loops of the mansion, you can gain help items blessed by Lucifer that will help your progress through the game. These items can be attained by doing simple chores such as tidying your room or taking out the trash, all of which count towards your behavior rating.

In Lucius’ arsenal, you’ll find a whole host of ordinary household items: screwdrivers, cameras, and various pest control items that can all be used or combined with other items to create deadly weapons. In addition to the creative combinations of items Lucius comes up with, he’s also blessed with the power of the devil and has the ability to use telekinesis, mind control, and a whole host of other superhuman powers. 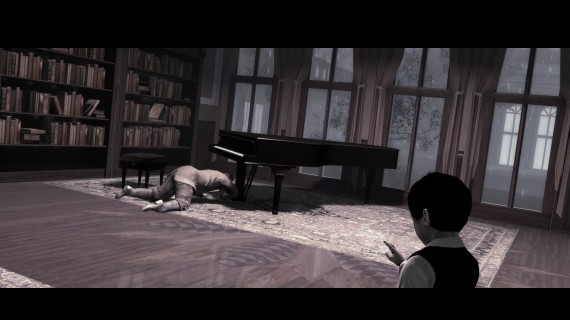 Lucius is certainly a refreshing change from the unfortunate trend of “mark your quest and follow” systems implemented into many games today. You’ll find yourself wanting to explore the expansive manor house, searching for items whilst taking in all the minor plot details from the many characters scattered around the house.

Despite having the help of Lucius’ journal and the map, I did find myself quite frustrated at times when searching for items, as they’re often quite small and/or well hidden. Regardless of how much I familiarized myself with the manor, I would still find myself running in circles sometimes, not quite sure what item I was meant to get or where exactly it was located.

This is both a good thing and a bad thing. On one hand, it allows you to really take in the vibrant characters and appreciate the intricacy and originality in some of the kill setups. But on the other hand, you may find yourself annoyed by the repetitive dialogue from the characters, as it seems there were only a few lines written to expand each character a little more per chapter. I feel that if the journal was a little less ambiguous, it would highlight the strong points without shortening or cheapening the experience too much.

Despite the sometimes frustrating build-up, the final kill of each chapter is so beautifully presented through a cinematic cutscene that you’ll find yourself forgiving the game for having you run around like a headless chicken searching for that final item to finish the kill.

If I had one criticism regarding the kills, though, it would be the lack of creativity that you, the player, get to put into them. While Lucius does have to make each death look like an unfortunate accident, being able to customize the execution of kills (or at least choose from a few different options) would have been nice. Thus, despite the ability to roam the mansion freely and speak to whoever you please, setting up kills really highlights the game’s linearity. To its credit, the latter part of the game’s plot does allow for some more spectacular deaths that somewhat make up for this lack of choice in execution. 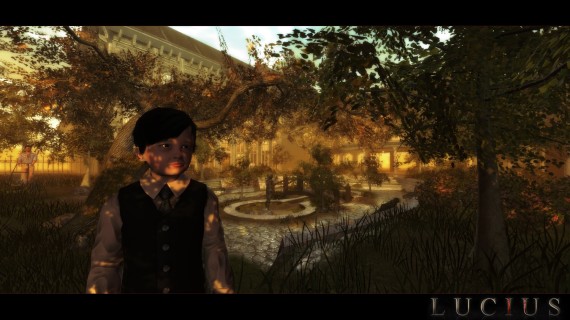 For an indie game, Lucius sports some pretty fantastic graphics. A lot of people tend to associate indie games with old-school 2D sprite designs, but Lucius smashes this misconception out of the water with its beautifully rendered, fully 3D environments and characters.

The art style is absolutely gorgeous. The muted, desaturated color scheme really lends itself to setting the tone of the game without slipping into a surrealist Tim Burton-esque nightmare. Shadows are used appropriately, and the various lamps and candles around the mansion light up the world without ruining that perfect tone.

Given that this is a PC gaming website, it’s appropriate to mention the game’s spartan options menu. Despite being a PC exclusive, Lucius’ graphics settings resemble that of a console port, giving you the ability to change only the resolution, VSync, and the level of “graphical fidelity” from low up to ultra. This is a shame because ultra seems to eat up frames like crazy, even though the visual difference between high and ultra is negligible. Having some additional options would be helpful to find the optimal balance between graphics and performance. Regardless, the game does seem fairly well optimized otherwise and ran pretty well for me overall.

Outside of graphical settings, Lucius does gain points for having controller support and fully remappable keys (which, sadly, is not a given in this day and age). 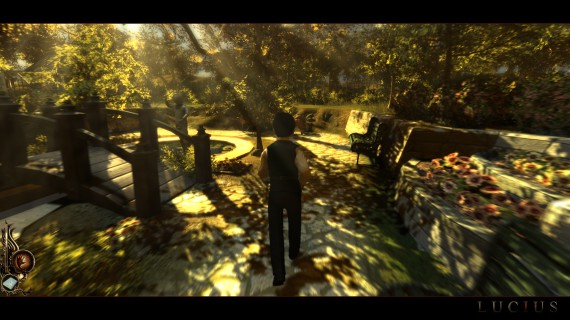 Overall, despite some of its shortcomings, Lucius is an excellent game for those who love subtlety in their gameplay and plots. You may find yourself lost and frustrated at times, but the payoff at the end of each chapter is more than enough to keep you playing right to the game’s fantastic conclusion. If you have a keen interest in classic horror films or you’re a fan of the Hitman games or stealth games in general, then Lucius should be high up on your purchase list!

To use the KBMOD rating system of fairness, I would give Lucius around a 7.5 out of 10. The game is by no means perfect, but it has enough content to warrant the price tag, and the intricacy of the in-game world is certainly admirable.