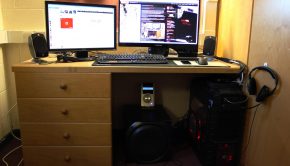 This week’s bro cave comes to us from Murray a.k.a. eSTeeM, who hails from the historic county of Lincolnshire, England

The Binding of Isaac has been out for over a year now, but I’m just getting into the game and

We’re back from Thanksgiving to bring you episode 70! We start off with what we’ve been playing and lead into

It’s getting chilly outside, so stay inside next to the warmth of your PC and join us for a great

Episode 69 is here, with all the prerequisite sexual innuendo! We are without Scott again this week, but our own

Thanksgiving week is here in the U.S., so fix yourself a generous plate of food and join us for this

After many requests on Twitter, we decided it would be good to have an EU build guide out there for

Welcome to episode 68! Scott is under the weather (we assume it’s an STD), but we have a special guest

Thanksgiving may be right around the corner, but the big news this week is the release of Black Ops 2!

We love Payday: The Heist here at KBMOD. The game is a fun co-op or solo experience and has a

Well friends, yesterday officially marked the beginning of the closed beta of the Steam client for Linux. Beta access has