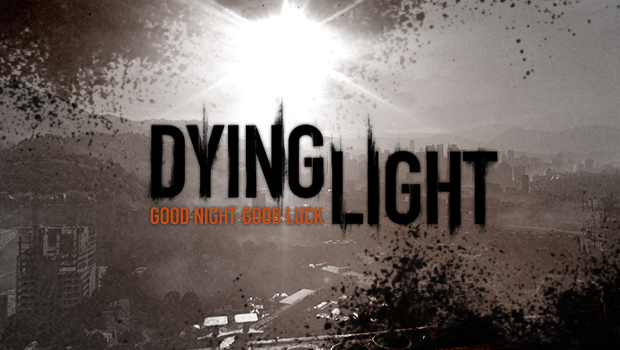 Published on February 15th, 2015 | by AjayLikesGaming

This is a guest article I asked fellow writer and friend, Tom Moore, to put together for the website. Tom recently graduated with a BA in Film and English Studies and currently resides in Norwich, UK. If you have any contributions for KBMOD, be sure to email us at [email protected] Enjoy!

“When there is no more room in Hell, the dead will walk the earth… and do sweet parkour tricks.”

In recent years, it has become increasingly difficult to use the term ‘visceral’ when describing any piece of media, particularly one as participatory as a video game. Words which once had power, evoking fear, triumph and wonder, have become buzzwords to fill blurb space. When we read Cover-based Gibfest III: Reckoning described as a “visceral, gritty thrill ride”, do we anticipate that it will actually be visceral, that is, penetrate beyond the simple reception of the on-screen information and affect something within the gamer?

It is a pleasure to call Dying Light

truly ‘visceral’ in its presentation – not just in its status as a particularly gory game, but in the fashion by which it begins to knock through the wall between true perception and in-game experience. As gamers strive to be ever more immersed in the digital worlds constructed for them and virtual reality technologies become available, this is important now more than ever. 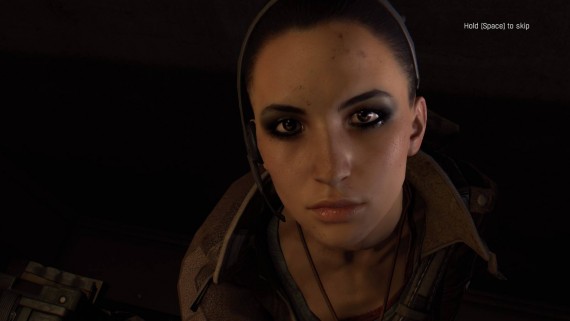 The city of Harran is in chaos. At an undisclosed point prior to the opening of Dying Light, citizens of the vaguely Middle Eastern city began to succumb to a mysterious virus, producing symptoms of necrosis, increased aggression, and an insatiable appetite for the flesh of the living. Those left uninfected have holed themselves up in a fortified apartment block they call ‘The Tower’ or turned to banditry. Enter special agent for the Global Relief Effort (GRE), Kyle Crane, on a mission to retrieve sensitive information being held against his employers by someone hiding in Harran. Crane, having trained for years in anticipation of a mission such as this, promptly gets held up by the local outlaws, bitten by a zombie and rescued by the Tower’s scouts. And so, Dying Light begins.

Though leaps and bounds, or rather pop-vaults and tic-tacs, ahead of Dead Island, it has inherited one of its older brother’s most unfortunate traits. The characters, from Tower leader and (handily) parkour instructor Brecken to sadistic warlord Rais, are stupendously bland. Superficially, like Dead Island‘s main quest giver John Sinamoi, these individuals have been lovingly crafted and made to look as interesting as possible while remaining a part of the world they inhabit. Sadly, their expertly rendered flesh is where the interest ends. These characters, for all their supposed drives and ideals, have nothing interesting to say or do. As a result, not only do the conversations Crane has with his various taskmasters bore, but so does the general story, which culminates in a lazy and frustrating last level and a final ‘boss’ which may trigger harrowing flashbacks for any of those who played last year’s Middle Earth: Shadow of Mordor to completion. 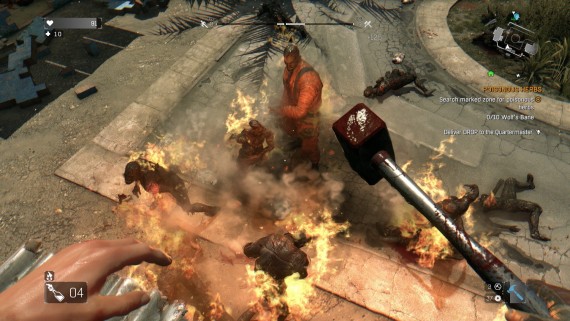 In line with Crane’s failures in the opening cutscene, you will not be particularly strong or quick from the get-go – at least from the standpoint of the average action game player-character.

Mistime a jump or meet air rather than zombie skull when you swing your weapon and you will soon be informed that you have died and lost a proportionate number of ‘survivor points’, one of the three types of experience it is possible to gain.

Completing the trio of point types available are ‘agility’ and ‘power’, which are awarded whenever free-running moves or successful attacks are executed, respectively. As you vault, climb, bludgeon and eviscerate your way about Harran, Crane’s skill tree develops with an almost natural progression, mostly avoiding immersion-breaking instant developments of nigh-superhuman abilities. This is vital to Dying Light’s success as a game, as it is precisely this immersion which Techland have clearly worked hard to achieve that has elevated it above its peers and predecessors.

The techniques Techland have employed to attain immersion parallel to games such as Mirror’s Edge, perhaps the game most often mentioned when virtual reality technologies are discussed, are manifold and surprisingly simple. This article will not go into such excruciating detail as to list them all, but it is worth noting a few of the most important.

As Crane flings himself from rooftop to rooftop, his legs and arms come into view, connecting with the nooks and crannies he uses to keep himself aloft with satisfying thwacks and thumps. Crane’s limbs can be seen at any time by moving the camera around, rather than miraculously appearing when needed in a dazzling moment of incongruity as was the fashion in Far Cry 4.

Similarly, Techland has abandoned the ‘hitting a Victoria sponge with a wooden spoon’ combat system for something far more impactful. Though enemies – particularly in the very early and late stages of the game – may still take a few hits to fell, the route taken to dispatch them can be as satisfying as the final blow itself. Each strike, provided you are not exhausted, will likely take a chunk of decaying flesh with it and send your aggressor staggering in the appropriate direction or perhaps even topple them, if it was a particularly well-placed or hefty blow. 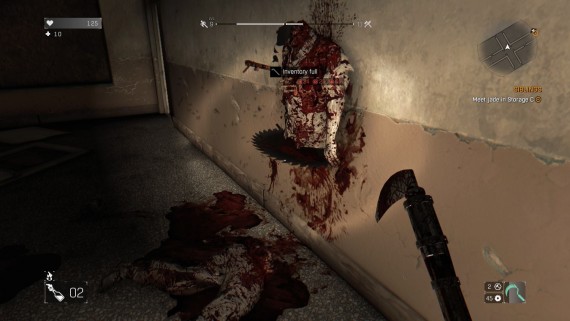 The attention Techland have paid to the mechanics of their brand of zombie slaughter would mean nothing were it not for the variation and detail in the models used for the infected. The first time an infected lunges at and latches onto Crane, it is truly distressing. A pallid, lesioned face flecked with brownish blood gnashes at you as you struggle to pry them off.

There are more monstrous infected variants, all of which have been as carefully crafted as their shambling brethren. Of particular note are the ‘virals’; humans on the verge of becoming fully infected, who possess the mindless rage of the common ‘biters’ but are still agile. Aside from the fact that their ability to dodge melee attacks and scale buildings makes them far more threatening and interesting to fight, it is the sounds which accompany them that make the virals memorable opponents.

The first time you connect with a charging viral, provided you have not perfectly aimed your swing and decapitated them, they may recoil and yelp, “No!”, “Stop!” or even, “Help!” For a brief instant, the last shred of humanity in the viral shows itself, providing a pang of pathos amidst the carnage. Across Dying Light‘s roughly fifteen hour main campaign, there are many moments contrived to elicit emotion, almost all of which fall flat primarily due to the terms ‘character development’ and ‘massive exposition dump one mission before subject of said dump dies’ becoming somewhat muddled. Like the more frightening moments of the game, empathy with the people of Harran develops organically through chance encounters such as this rather than telegraphed set-pieces.

Non-infected models are of a similar surprisingly high quality, demonstrating Techland’s devotion to visual consistency rather than the selective polish for which some companies have developed a reputation. 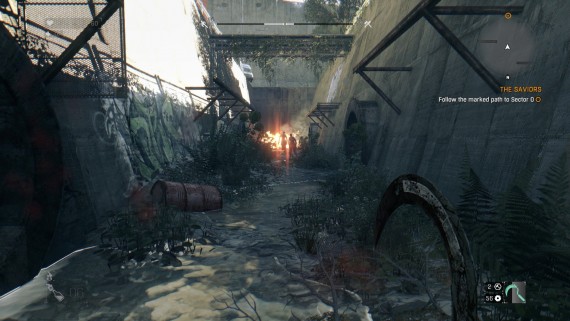 From a technological standpoint, Dying Light runs stably – after a handful of settings tweaks.

On release, many who had the ‘view distance’ setting anywhere beyond minimal were met with huge framerate drops whenever a significant amount of landscape was visible. As a game focused around staying atop buildings, this was obviously a problem. For this review, the view distance was set to 0, producing very little noticeable difference in visual detail (certainly not enough to hinder enjoyment) but a massive leap in performance.

As the card used to run it was a GTX 970, the ‘NVIDIA Depth of Field’ option was available. Even after the second patch released by Techland, this setting still caused freezes of up to ten seconds when transitioning into cutscenes. Disabling this, again, did not reduce the quality of Dying Light‘s experience (especially as the game uses its own, less intrusive depth of field) but eliminated all micro-stuttering and freezing. Once these settings had been disabled, the game ran at a consistent sixty frames per second with all other settings at maximum.

Though it did not act as a performance drain in the case of this review, some have reported that disabling chromatic aberration – in which the colours of elements at the periphery of the screen become distorted – through editing files also provides a performance boost. Why Techland did not make this intrusive and, in some cases, headache-inducing, element toggle-able as Deck 13 did for Lords of the Fallen is perplexing. 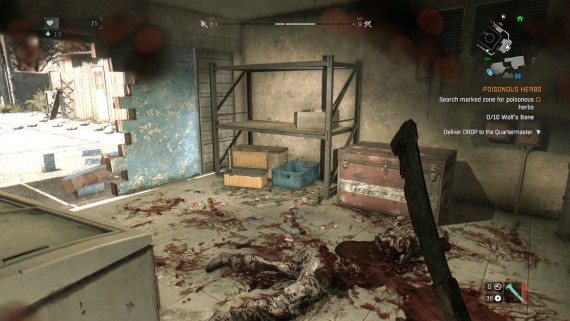 Ultimately, Dying Light is fun. This is not to forgive its shortcomings, nor to ignore them. Were Techland to have succeeded in providing a memorable story with the emotional peaks they so desperately try to wring from the player in their ham-fisted narrative delivery, their game would have been all the better for it, perhaps even going down as a classic. As it is, Dying Light is a tremendously put together diversion. For all of the flaws which may prevent it from being considered an important part of gaming history, the game represents a balance between immersion and entertainment which so few developers manage to locate.

Be sure to let us know how you felt about Dying Light in the comment section below and follow us on Twitter at @KBMODGaming for the latest on all things KBMOD.

One Response to Dying Light – Review