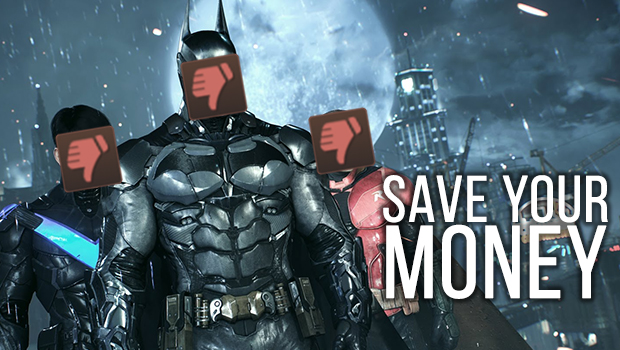 Following the news that Batman: Arkham Knight would receive no review codes for the PC platform, fans turned sceptical over the quality of this hugely anticipated game’s port. Within an hour of the game unlocking, Arkham Knight’s Steam review score plummeted, currently holding a mere 33% positive rating. As I played through the game’s opening hours, it was abundantly clear why.

From simply looking through the game’s options menu, signs of a poor port are clear as day. Despite the option to rebind keys, there is a curious lack of a mouse sensitivity slider. When dipping into the graphics options, things only get worse. 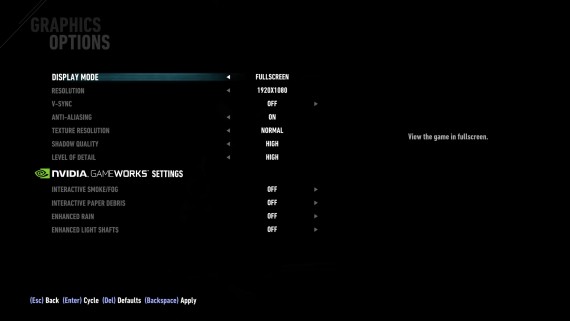 Excluding the four NVIDIA exclusive settings, gamers are left with only four options to tweak, outside of the expected ability to alter the resolution, display mode, and V-SYNC toggle. Following a rather modest number of settings in Arkham City, this is a colossal let down.

Likewise, anti-aliasing has taken a huge step back from its Rocksteady predecessor. Arkham City allowed three levels of FXAA, next to 2X, 4X, and 8X MSAA. NVIDIA users could also take advantage of the CSAA options, including 16X CSAA, 16xQ CSAA, and 32X CSAA. In Arkham Knight, you have one option for FXAA: ‘on’ or ‘off’. Implementation appears rather poor, too, with the image going far beyond the blurred expectations of this anti-aliasing method.

The disappointment doesn’t end there. Texture resolution caps out at the ‘normal’ setting, with many users reporting texture streaming issues throughout the city. Film grain, chromatic aberration, and motion blur are all present, with no UI option to disable them. Even worse, when attempting to tweak the blur settings in the .INI file, the game will persistently crash, with the ‘verify game cache’ option deleting and redownloading the entire game. 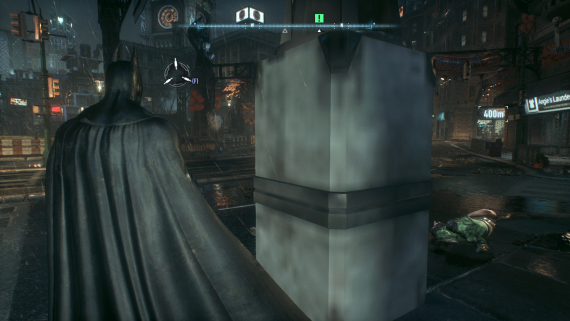 As I began the story mode, I was greeted with an extremely choppy pre-rendered cutscene; an issue that appeared, and was quickly patched out, in The Witcher 3. Things took a turn for the worse as the game greeted me with a 30FPS cap – a rather strange decision given the game’s benchmarking tool runs unlocked.

At the time, I assumed it may have been an unfortunate quirk of the game’s unconventional opening. However, as the prologue finished, and the game handed me control of Batman, I soon realised this was not the case. Out of the box, the entirety of Arkham Knight is capped at 30FPS.

Thankfully, users quickly found a way around this absurd lock. Navigating to the file, “BmSystemSettings.ini” in your Arkham Knight install directory (“\BMGame\Config\BmGame\Config\”), and changing the line “Max_FPS=30” to your desired frame rate will unlock the FPS. Unfortunately, the game is still plagued with severe frame drops during seemingly random parts of the game. One consistent and devastating drop occurs when speeding through the city in the Batmobile – a rather severe issue given the game’s huge focus on this vehicle.

Despite NVIDIA touting an SLI profile for the game with their latest drivers, the game uses only one card. Users attempting to play with SLI enabled will be greeted with far worse performance than simply running with the option disabled.

Unconfirmed reports from NeoGAF state that Arkham Knight is using the much maligned Denuvo DRM. This draconian implementation has been known to cause some crushing performance issues in the games that use it. In particular, Lords of the Fallen and Dragon Age: Inquisition ran infamously poorly for reasons that were often attributed to this form of DRM. Unfortunately, we may never get official confirmation as developers have been awfully quiet on the subject following the one and only officially acknowledged usage in FIFA 15.

Batman: Arkham Knight was supposed to be the Holy Grail, and ultimate finale for this beloved series. Sadly, it appears it will go out with a whimper, as PC gamers abandon their stutter-filled experience, or brute force through with a sour taste in their mouths.

Rocksteady need to address these issues, and they need to do it in a timely manner. To take such a huge step back after promises of an immense leap forward is heartbreaking.

“We’re aiming for parity across all platforms. Whatever [the frame rate] is, it’s going to be awesome.” – Rocksteady

Expect a KBMOD Roundtable in the next few days and an in-depth review next week. For more on all things KBMOD, follow us on Twitter @KBMODGaming.

UPDATE: Throughout the day, media outlets and fans alike, have been picking at every last detail of Arkham Knight‘s pitiful port. Alongside learning that the studio behind the port, Iron Galaxy Studios, had a mere 12 people working on the game, it was revealed that the PC port is missing key graphical features, leading to the console counterparts looking significantly better.

Thanks to CandyLand and the users from /r/PCMasterrace for putting together the following comparison images. 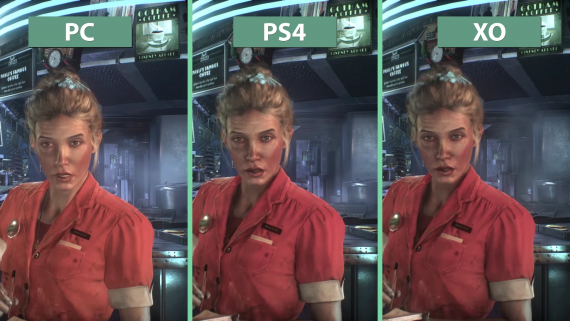 One of the most baffling omissions from the PC port is Ambient Occlusion; a technique commonly used to create soft, realistic shadows on objects within the world. The difference is painfully clear when examining the waitress’ underarm. Likewise, her face is far flatter, lacking the natural shadows featured in the PS4 and Xbox One versions. Even the underside of the table behind her is lacking the same depth depicted in the console counterparts. When examining the gaps between the wooden flooring in some areas, the difference is staggering. This oversight is one of the most severe reasons behind the game’s dated visuals on the PC. 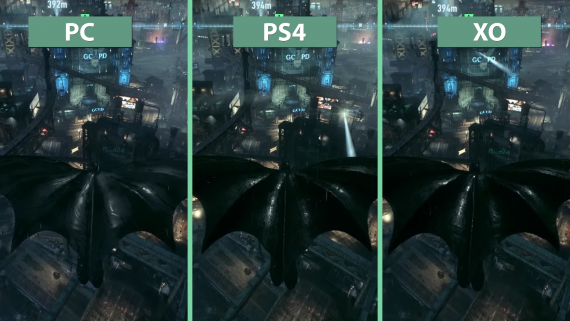 Somewhere along the line in Arkham Knight‘s port production, Iron Galaxy Studios managed to break the game’s texture maps, leaving materials intended to be wet and glossy, entirely flat and lifeless. Throughout the entirety of the game, rain pours from the skies, splattering the ground, and covering Batman from head to toe… At least in the console versions.

In the PC release, Batman is left with a strange, rubbery texture as a result of the missing maps. It leaves the game looking not too dissimilar from the early titles found on last generation consoles. It is baffling as to how this managed to make it through the quality assurance process.

Lastly, the depth of field found on the PS4 version features a beautiful, cinematic bokeh effect that has become quite common in recent AAA titles. Continuing the trend, the PC version showcases a very dated, simple blur effect, alongside more evidence of the aforementioned texture issues.

Many frustrated gamers have pointed out that NVIDIA’s own GameWorks showcase for Arkham Knight seemingly showed the PC version running as intended. Rain drips down Batman’s cowl, ambient occlusion implementation adds wonderful depth to the scene, and the NVIDIA effects appear in stunning fashion at a crisp, fluid 1080p 60fps.

What version of the game was this, and why was the product handed to consumers at launch so painfully different? These companies have a lot to say for themselves, and so far they’re saying very little.

UPDATE 2: Following the catastrophic backlash over the past two days, WB Games have announced via their community forums that all future PC sales for Batman: Arkham Knight are now suspended until the game satisfies their ‘quality standards’.

We want to apologize to those of you who are experiencing performance issues with Batman: Arkham Knight on PC. We take these issues very seriously and have therefore decided to suspend future game sales of the PC version while we work to address these issues to satisfy our quality standards.  We greatly value our customers and know that while there are a significant amount of players who are enjoying the game on PC, we want to do whatever we can to make the experience better for PC players overall.

Thank you to those players who have already given valuable feedback. We are continuously monitoring all threads posted in the Official Batman: Arkham Knight Community and Steam forums, as well as any issues logged with our Customer Support (support.wbgames.com). If you purchased your copy of the game and are not satisfied with your experience, then we ask for your patience while these issues are resolved. If desired, you can request a refund at help.steampowered.com (Steam refund policies can be found here: http://store.steampowered.com/steam_refunds) or the retail location where you purchased the game.

The Batman: Arkham fans have continually supported the franchise to its current height of success, and we want to thank you for your patience as we work to deliver an updated version of Batman: Arkham Knight on PC so you can all enjoy the final chapter of the Batman: Arkham series as it was meant to be played.

Wow. Taking one of the biggest games of the year off the market and detailing how to receive a refund is a severe response, but an extremely important one. How long it will take to develop a patch for the sheer number of issues is unknown, but hopefully WB Games will take great care in bringing the game up to standards in a sufficient amount of time. Rushing hot fixes for the sake of speedily returning the game to the market would be a crying shame.

Though Arkham Knight has yet to be removed from Steam, it’s highly likely it will be taken down fairly shortly. The cynic wonders whether the game’s 68% negative Steam reviews will be reset upon relisting…