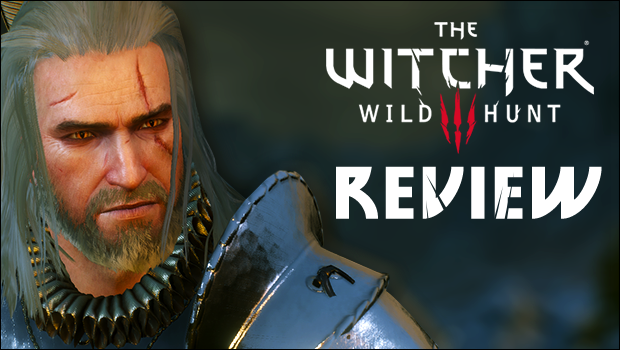 Published on June 2nd, 2015 | by AjayLikesGaming

For fans of The Witcher series, apprehensions were at an all-time high upon the announcement that the franchise would be moving into open-world territory. Fears that the game’s phenomenal narrative focus would be significantly hindered arose, and were worsened by CD Projekt Red’s assurance that the game would be extremely accessible to newcomers.

How would player’s choices from the previous games tie into this narrative? Many fans were miffed to find that The Witcher 2’s story, as complex and choice-affected as it was, hardly deviated from decisions made in its predecessor.

Moreover, the outcry upon the revelation that the game’s visuals were significantly altered left The Witcher 3: The Wild Hunt with a lot to make up for, and even more to deliver on. 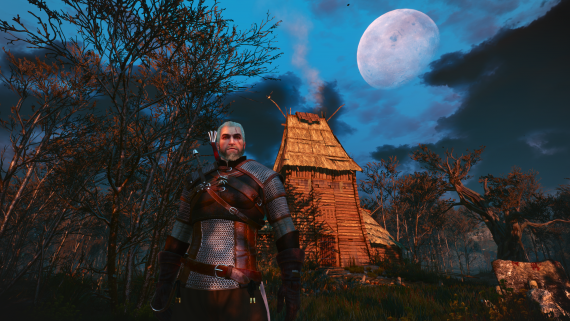 After an astonishingly complex tale of kingslayers, political battles, and race wars, The Witcher 3 takes it down a notch and opts for a simpler, and far more personal tale.  Following the recovery of his memory in The Witcher 2, Geralt sets out to find Ciri, a girl he raised as a daughter figure, who is being pursued by the series’ ever looming antagonists, The Wild Hunt – a group of spectral riders that induce utter terror throughout the world; burning villages and kidnapping many while they’re at it.

It’s a story that makes good on CD Projekt RED’s promises of accessibility. Unlike its predecessors, there are few political deviances to confuse or overwhelm newcomers. Many of the events throughout the game’s main quest are told in lengthy, self-contained arcs, with only a few untied strings left to tackle in side quests or later within the narrative.

These chapters are magnificently written, and a significant step up from previous games. The voice acting is improved, the writing is far more streamlined, and the humour is especially solid. At times, there is a level of poignancy so rarely found outside of the most climactic moments in other games of the same genre.

Shrouded in extremely heavy themes, such as rape, miscarriage, and murder, this is not a game for the faint of heart. Comparisons to Game of Thrones are just, and the quality of the writing very much matches the excellence found in the show. Each aspect is handled with taste and real delicacy that brings the hardened world of The Witcher to life in a rather convincing manner. 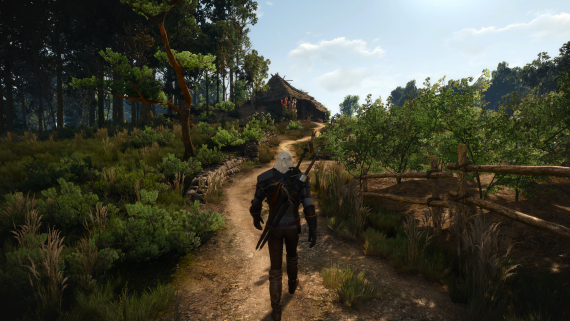 This unwavering focus does come at a rather costly price, however, as the game lacks the same branching narrative that its predecessor was so famous for. Where The Witcher 2 had fewer choices, but devastating consequences, The Witcher 3 opts for far more, but with arguably less dramatic repercussions until the later parts of the game. Characters may die, rulers may change, but the effects often have little bearing on how the story plays out. This design is far subtler, and perhaps more appropriate to a series renowned for its moral ambiguities, but it does result in a game that is comparatively less intense (albeit better written).

Likewise, in what is assumedly the result of planned accessibility, your choices from the previous game matter so little that it’s a wonder why they bothered including a save import system at all. Characters you went through the effort of saving are conveniently killed off between games, realms you fought to defend are overrun, and companions you spent 30 hours with are left unmentioned or relegated to a mere two lines of dialogue in an optional conversation tree. Your choices are discarded for a ‘world reset’, with the remainder left to determine what minor cameos may occur, or who you successfully romance. It’s an unsurprising revelation given how choices were handled between The Witcher 1 and 2, but it’s a disappointing one that fans may have hoped would be rectified in this sequel, rather than made worse. 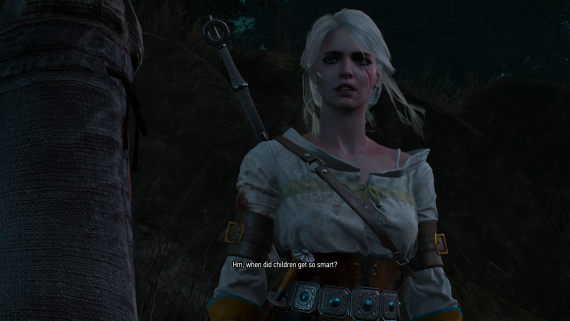 Despite these complaints, it’s difficult to feel overly slighted by the design decision. The sheer scope of the choices found in The Witcher 3 shine far brighter than anything seen before. A decision made eight hours into the game may not rear its head until a good ten hours later in an entirely different quest. Characters you shun may refuse to come to your aid during vital sequences, and towns you leave to bandits may prevent you from accessing certain quests. They’re subtle changes, but they’re unpredictable and do a great job at accenting smaller moments as you work your way towards the climax.

The Witcher 3’s narrative is problematic, but it is far from bad. It’s perhaps how one might feel had BioWare opted to oust the consequences of Mass Effect 1 and 2, in favour of telling a new, far better crafted story. It’s bound to impress everyone who plays it, but it may not quite be good enough to fully eradicate the sour taste in the mouths of fans who poured hundreds of hours into the previous games. 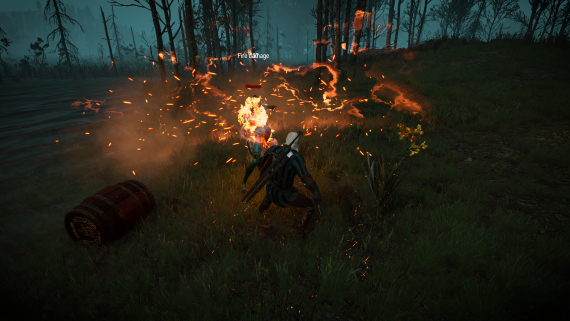 Where The Wild Hunt truly shines is in its side quests – and there are a lot of them. CD Projekt Red cites over 100 hours of gameplay, and while that’s absolutely true, it’s important to note that it is far from the padding often found in AAA titles today. Each outing is a truly fascinating one that more than knows its place. From hour long expeditions to short 10 minute fetch quests, none even once overstay its welcome.

One person may have you following clues to hunt down a ruthless murderer in Novigrad, another will send into the oceans of Skellige in search of sunken treasure, while others will force you into the thick of the woods as you work to slay one of the hundreds of beasts that inhabit the Northern Kingdoms. No matter which you undertake, know that each will have its own set of unique characters, and a small narrative to frame them.

Most impressively, there are many that have an effect on the main quest, which failing to complete, will result in choices being taken away from you, leading to less than favourable consequences. This is an incentive often missing from open world RPGs, and an aspect one hopes will encourage the most rapid of gamers to slow down, and immerse themselves in this wonderfully crafted environment. 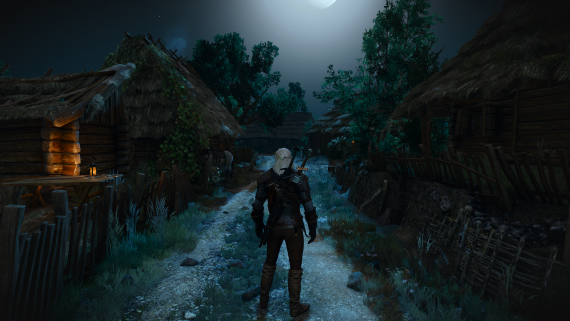 When reading about the first two Witcher games, it is often the combat that takes the brunt of the criticism; often described as a clunky, awkward, fun-succubus. It was the sole reason many folks failed to complete the games, meaning it was absolutely imperative that CD Projekt Red address these issues, if they were to achieve mass success.

Fortunately, the developers appear to have taken these criticisms to heart, resulting in a totally revamped combat system that plays like a satisfying mix of Dark Souls and Assassin’s Creed. Players must use ‘signs’ – a mix of offensive and defensive spells – to best their opponents, combined with the appropriate sword. Even on the lowest difficulties, it’s imperative that one understands their opponent’s patterns and weaknesses. Much like the recent Bloodborne, learning to parry is an absolute must.

At times, the combat can feel frustrating as Geralt moves awkwardly slow in the heat of battle. Often, a long-range stun will just expire as the witcher reaches his target, leading to an exasperating retreat before trying again. It’s tough, but ultimately a very rewarding system once mastered.

As Geralt’s level improves, so do his moves in combat. A satisfyingly in-depth skill tree allows players to upgrade their swordsmanship, alongside their alchemy and sign-casting abilities. These can be further improved by placing mutagens (acquired by slaying monsters) of the same type in their slots. As you level your abilities, you’ll be privy to some of the marvellous sword animations featured in the game.

Never before has a man spinning his sword around like a ballerina been so satisfying!

Likewise, the crafting of new armour and swords are an absolute must in your quest for success. Throughout the world, Geralt can find blueprints for various gear, which can be taken to a blacksmith and crafted, given you hold the required materials. With a level attached to each item, there’s yet more incentive added to tackle the game’s side quests. The satisfaction as you hit the required level for that beautiful piece of armour is unrivaled! 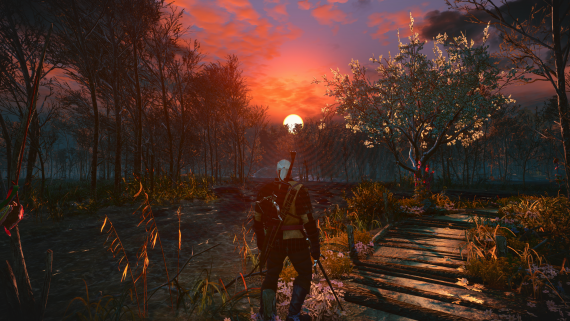 Following the controversy surrounding the game’s downgraded visuals, many were concerned that the lifelike environments depicted in the initial E3 trailers would be lost. For a series so well known for pushing machines, this would be quite the disappointment.

Thankfully, the game is still outright beautiful. The lighting isn’t quite as good before, and the foliage up close is rather unsightly, but as you gallop through the dense forests packed to the brim with swaying trees, and you notice the sun pouring through the leaves as it sets on the horizon, it’s hard to do anything but sit back and congratulate CD Projekt Red on creating the most beautiful open world environment ever made.

Combined with some great optimisation, and the sheer range of hardware this game runs on, it’s impressive to see just how striking a world they achieved with such cheap rendering methods. 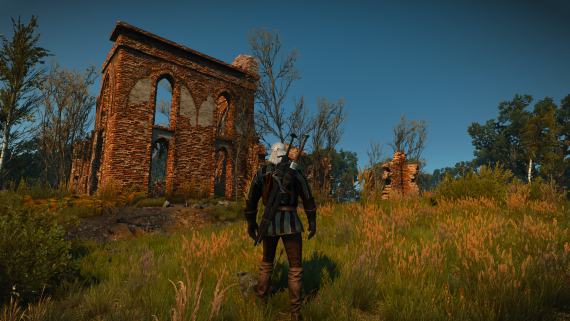 The Witcher 3: The Wild Hunt is perhaps the best open-world RPG ever made, it’s a true task to think of a competitor that even begins to reach the game’s scale, while also achieving the same level of depth. Skyrim is as wide as an ocean, but as deep as a puddle, The Wild Hunt is miles deep and more than wide enough to feel fulfilling.

Despite the game’s main quest working as a disappointing sequel, it stands on its own wonderfully, and features a mammoth of well fleshed out side quests, all supported by a superb array of characters, and a masterful soundtrack. Alongside its sprawling open-world and beautiful visuals, it’s hard to argue that this isn’t a huge step up from its predecessor.

With 70 hours down, and the story said and done, there’s still a huge chunk of side quests to undertake. This behemoth is sure to engage for hundreds of hours, and should stand proud as a AAA title truly worth its price tag.

Summary: Never before has an open-world RPG had this level of depth. The sheer beauty of the world and care put into the finest of details is astounding.

9 Responses to REVIEW: The Witcher 3: The Wild Hunt