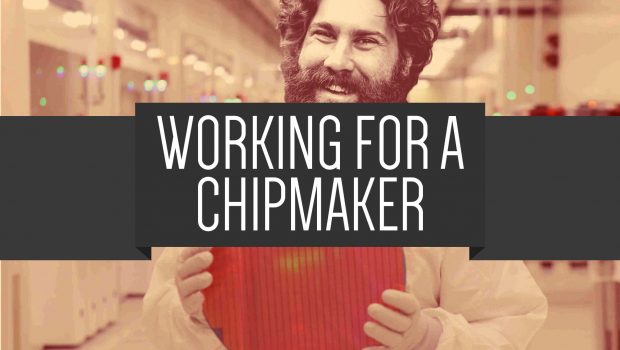 Working For A Chipmaker

As some of you may or may not be aware I’ve worked at two different semiconductor companies, AMD and Samsung Austin Semiconductor. Each company is very different and has very different cultures and histories that make them unique. However, there are industry similarities that I will discuss in this article and others while trying to avoid specifics to those companies.

In this series I will discuss the different types of jobs that are available at a semiconductor company. As many of you are interested in working for a semiconductor company, this may help you decide what degree or classes to pursue if you’re in school still. For a professional, it may help you figure out how to leverage your existing skills to move into these companies. That being said, once you are out of college it is notoriously difficult to get into many of these companies because they can wait for the very best. Each company is well respected and will have a large number of applicants at any time. In most cases you’ll have to move to wherever the job is in any event and some places aren’t as desirable as others.

My experiences with AMD and Samsung offer me a set of great perspectives, because I’ve been able to see both the manufacturing of chips at Samsung and the design of chips at AMD. Yes, AMD used to make their own chips and there’s a famous quote from an AMD CEO: “Real men have fabs” but that portion of AMD was spun off years ago into Global Foundries, now a key partner of AMD. I will start this series with Samsung, because I worked there first and for a longer period of time (4 years vs. 2 years). 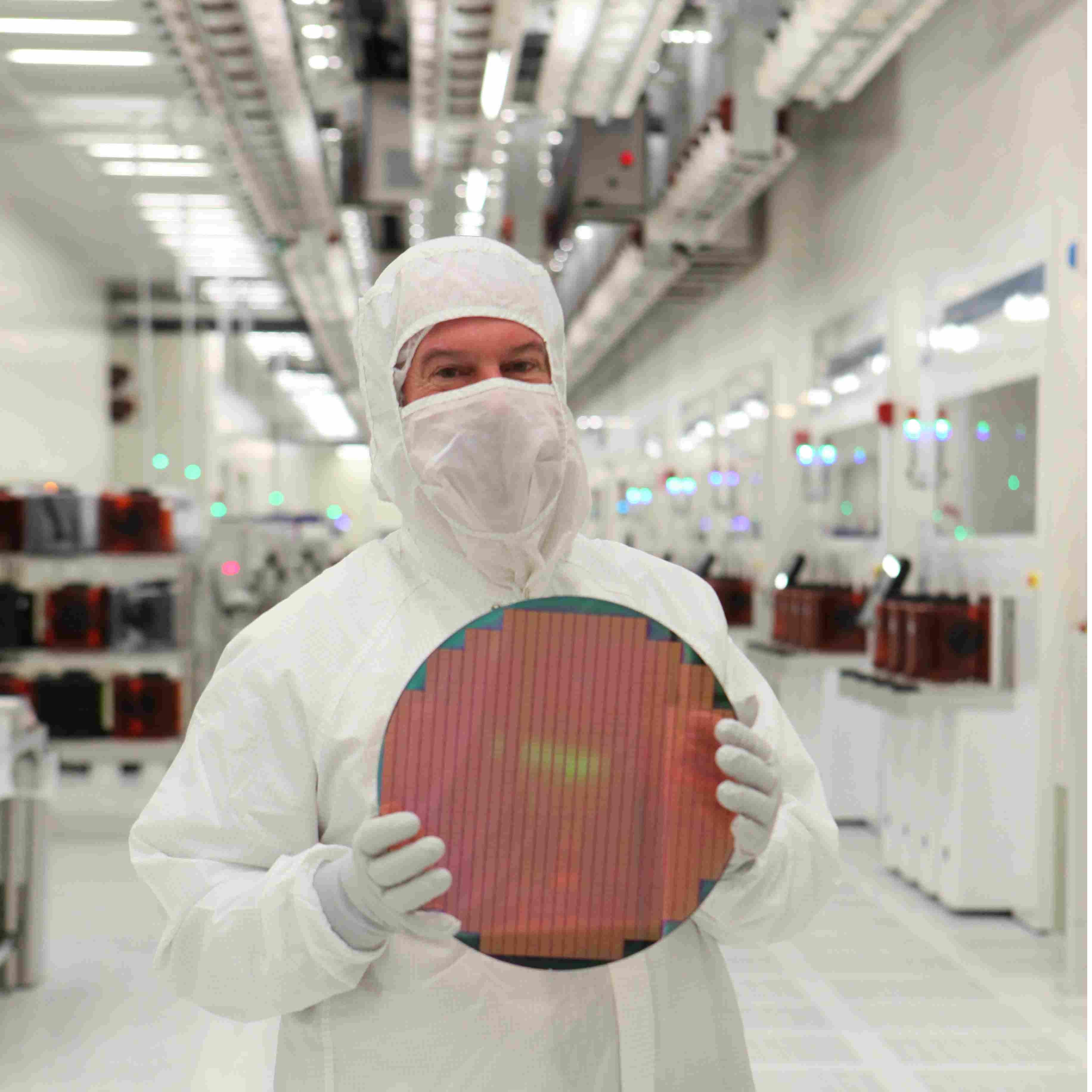 A guy smocked up and holding a 12″ wafer

In the picture to the left you can see a good representation of what it looks like to work in a fab. A “fab” or Semiconductor Fabrication Building, is where the wafer of doped silicon is turned into a computer chip of some sort (Doping silicon means you are injecting negative ions into the lattice structure of the crystalline silicon). In the picture you are able to see the corrugated floors, which continually pull particles out of the air (and conveniently cover the sounds and smells of farts). On the right side of the picture you can see several tools with boxes in front of them. Those boxes are actually lots of wafers. In each lot there are 25 wafers and each wafer will produce somewhere between 300-500 chips depending on the dimensions of the chip. A modern fab can produce anywhere between 80,000-150,000 wafers per month, meaning you can expect, assuming 90% yield, 36,000,000 chips per month from a fab. Pretty crazy, right? This is typically not a single product. While working in the DRAM fab at Samsung we typically had 10-20 products at any time running through the fab. Along the ceiling you are able to see the Front Opening Universal Pod (FOUP) automated material handling system (AMHS), which automatically lowers the FOUP onto the tool, takes it off the tool, and moves it to the next tool or into a holding area until it is ready for production. A FOUP holds the 25 wafers in a very heavy duty box and is a Class 1 clean room, which has fewer than one 5-micron-sized-particles per cubic meter (~35 cubic feet). As a point of reference, your hair is about 50 microns thick.

To make any semiconductor chip regardless of if it’s RAM, NAND Flash memory, Logic (GPU, x86 or ARM), PhotoVoltaic, or a mix of Analog and Digital, there are several general steps that the chip must go through: Photo-lithography (Photo or Litho depending on culture), Etch, Wet Etch, Chemical Vapor Deposition (CVD), Diffusion, Metal Sputter (Physical Vapor Deposition – PVD), Chemical Mechanical Planarization (CMP), and Ion Implant. These are the major value adding steps to the process. I’ll explain each as they are different and interesting in their own ways. I didn’t work in any of these groups, though. My job was in Yield Engineering, which I’ll discuss as well because it’s a pretty important job as I worked on defect reduction and yield improvement projects with each of these teams.

I’ll start with Photo-Lithography though, or as we called it at Samsung – Photo. These are massive tools and probably the most expensive piece of equipment in the entire fab. The most cutting edge piece of equipment can run over $30,000,000, but will likely be in service in some capacity for 10-15 years unless there is a change in wafer size. While working at Samsung we switched from an 8″ wafer, about the size of a salad plate, to a 12″ wafer, which is the size of a record or dinner plate which rendered all of the older pieces of equipment useless.

ASML’s EUV Photo-Lithography tool. The light is bouncing around to shrink features from what we can see to the 10nm required for the product

The simplest explanation of Photo is that it takes a picture of a design which is developed so that Etch can cut away the pattern into the chip. Of course the actual way it works is much more complicated, in fact many engineers called it “Black Magic”. First, the wafer is coated with a material called Photo resist. This is spun on and is typically only 30-50 grams of resist, which is a few drops of the material. As the drops are falling, the wafer is spinning at an extremely high rate so the material fully coats the wafer. The wafer is then moved onto a chuck, held down with a magnet and then a laser. Depending on how small the pattern is the wave length changes – the next gen Intel chips are using Extreme UV (EUV), shoots through a reticle. The reticle is a crystal with the pattern for 4-16 chips etched into it so that they are all shot at the same time – increasing capacity. From there, the wafer is moved into development which removes the exposed area, while the rest of the photo resist remains in place. Afterwards the wafer is placed back into the FOUP and waits to be transported to the next step. Total processing time for a wafer is anywhere between 30 seconds to 1.5 minutes.

There are several jobs that make the Photo team successful. First up is the Process Engineer. They are responsible for making sure that the materials going into the process are up to snuff and are as low cost as possible. They are also responsible for making sure the focus and aperture are correct before releasing the “recipe” to the tool for production. Second is the Equipment Engineer. These engineers are responsible for making sure all the moving parts of the tools are maintained so they can run as close to 24 hours a day as possible. They are expected to schedule maintenance and fix the tool whenever the tool is down. Well, they don’t actually fix the tool. They have Technicians that do that. The Techs are really what keep a fab up and running. They are the heart and soul of the fab and are often overlooked and mistreated by the engineers. However, if you have a good relationship with your Techs, your tools are going to get back up quicker and will get more love and care.

Equipment Engineers are typically Mechanical or Electro-Mechanical Engineers. They need to worry about fixing robots and fixing mechanical things. While the Process Engineers are more likely going to be Chemical Engineers but I’ve seen Electrical Engineers in those roles, too. In most cases, these positions are filled right after college in a big group and you’re basically assigned a role based on your degree and how well the leaders of the groups like you.

Working For A Chipmaker: Part III →