>Ultra Portables to do Double Duty? 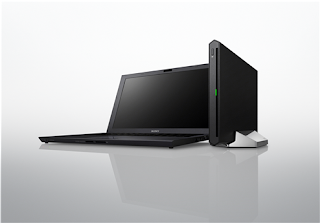 No word on a U.S. release yet, but this might intrigue some of our European bros – Sony has announced a new ultra portable laptop which does double duty as a “desktop replacement” with the use of an Intel Light Peak / Thunderbolt driven “Power Media Dock”

The Vaio Z itself is relatively unremarkable, though includes some nice hardware:

Here’s where the Vaio-Z (and future implication) gets interesting: 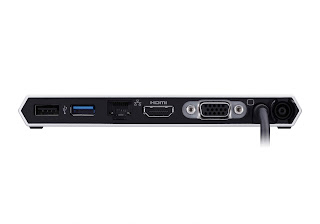 Power Media Dock
All of that connected to the Vaio Z over Intel’s Thunderbolt technology (Previously code named Light Peak).  Thunderbolt is capable of dual-channel 10 Gbps per port, is bi-directional, and employs both PCI-Express and DisplayPort protocol.
Possible oversight on the part of Sony is that they’ve opted to use a proprietary port, rather than the soon-to-be industry standard Thunderbolt port (as used in new Apple products).  The press release indicates that is an “optical cable” and a “proprietary port” which must be a combo port for USB while the Vaio is not docked. The problem here is that Thunderbolt is capable of daisy chaining devices together – perhaps an additional Thunderbolt port on the Power Media Dock would have been prudent for future expansion.  As seen below (in the terribly small photo provided by Sony) a peculiar port sits between the HDMI and USB 3.0 ports. 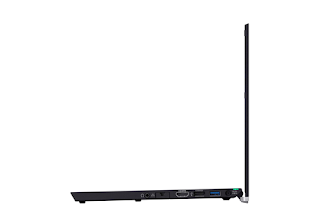 Now, the Radeon HD 6650M itself is a mid-range graphics card designed for laptops.  It supports DX11, and is the successor of the 5650.  It’s clocked at 600mhz, with a memory speed of 900mhz.  It includes 480 unified pipelines, a 128 bit memory bus width, and was manufactured on a 40 nm process.  The 6650M also features EyeFinity+.
In total, the Vaio Z is capable of supporting 4 displays (inclulding the built in laptop display) via the HDMI port on the laptop, the HDMI and VGA ports on the dock.
I ran across a few benchmarks at NotebookCheck which indicate that the HD 6650M is capable of playing some of the best games on the market, at moderate settings and framerates.  No, it’s not going to replace your GTX 580. If you’re on a budget, and would like an ultra portable to pull double duty, you can probably get away with it.
Why am I interested?  I’m looking forward to a company like Asus who might decide to create a thunderbolt attached dock with a dual height PCI-Express card slot for enthusiasts to choose their own cards.  Not everyone can afford a desktop and a laptop – something like this could meet in the middle.
All Images Courtesy presscentre.sony.eu

Update: See the write up over at Anandtech for more information

>Ultra Portables to do Double Duty? →