Oi. I guess it’s my turn to partake in the brocave exhibition. Bad time, as I have a GPU in RMA.

That doesn’t really mean much to me, though. I’m notorious for blowing shit up. I swap parts more than anybody on the face of the Earth, and I wouldn’t have it any other way.
When my PC is fully functional, I’m running the following specs:
Coolermaster HAF 912 (I have a 932, but I like leg room and airflow seems fine.)
The low-end Gigabyte p67 mobo (I’ve had the high-end and a Sabertooth. They sucked.)
8 gigs of Corsair Dominator
2x Powercooler 6970s in crossfire
i7 2600k @ 4.8 ghz (hyper 212+ cooler – also currently in RMA. I break shit a lot.)
1TB WD black
1TB SSD prototype from somebody I can’t tell you about, because that’s under NDA.
Youtube money, yeah?
I’m lame. I run one single 27 inch monitor. I love it. It’s from Haans G. I had never heard of them, but this thing was 189 bucks. Delicious.
For a keyboard, I’m rocking the Logitech G15. What kind of mouse do you use to headshot the noobs, you ask? The Razer Deathadder 3500 dpi. It’s amazing. Also use a Rocketfish hard surface mousepad. It was like 12 bucks. It’s a shitty Best Buy brand. It’s also amazing.
Note the beer. I love beer. Beer and gaming.

Here’s the inside of my case. I am better at wiring than Alex and Scott. Actually, I don’t even think Scott showed you the inside of his case. I’ve seen it IRL. It’s terrible. He also can’t install a hyper 212+.
Did you guys know that CS:S is a brand new game?
If you subscribe to me on Youtube, I’ll get you in the alpha.
Currently running an i5 2500k I purchased on the cheap. (I want to see how far I can overclock it before it explodes.) and 8GB of Adata RAM that I got for like nothing. (8 GB for 28 bucks.) Also trying to blow this up. GPU is still a single 6970. 2nd one should be back within the next 2 weeks or so.

I do believe I’m the last KBMOD contributor to partake in the Brocave. Next up: User submissions. Show us your Macs and/or Console gaming setups. I would really enjoy making fun of you.
Peace, love, and blow up your consoles.
-John 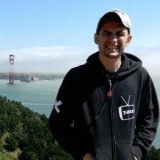