Global Agenda is a sci-fi MMO based on the Unreal 3 engine. It was released last year, but after several subscription models it recently became free to play, with some micro-transactions. The game was crafted by Hi-Rez Studios, who are also making the upcoming Tribes: Ascend. I wanted to see what it was like to play a newer game by the company. Also, it’s free. Keep in mind, this is a first impression, not a full review. This is an MMO with plenty of content, and in the hour or so I played, I haven’t experienced everything.

First of all, I had to go make an account on their website. This was pretty painless, it also allowed me to apply for the Tribes: Ascend beta at the end. You can pay to do the Elite Agent pack ($15), which doubles your XP and rewards forever. I believe you can upgrade to this whenever you want. There are other micro-transactions which are there for appearance sake a lot of the time, much like TF2. I declined the Elite pack as I hadn’t touched the game yet. After signing up, I logged in and went to character creation. The menus are all pretty straight forward and there was nothing too confusing about them. Even someone new to the MMO genre won’t be overwhelmed. 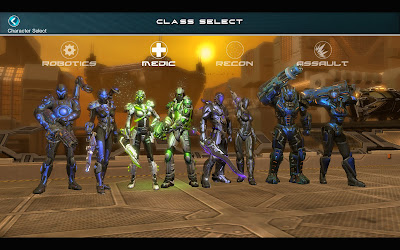 As you can see (click to enlarge) there are 4 class types. Robotics, which can deploy sentries and use other augments to help them out. There is Recon, which is a melee or sniper finesse class. There is also the Assault class, which looks to be heavy weapons. The medic, which I chose, is the healer class. 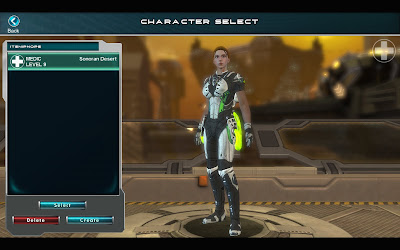 As soon as you enter the game you are alone in a stasis tank in a Commonwealth lab. The Commonwealth is the overarching, oppressive government. Some agents from one of the resistance factions come to help free you. After this cut-scene you control you character while trying to escape the Commonwealth facility.

The game is in third-person perspective, but the controls are standard WSAD and other FPS conventions. Eventually you get fitted with a jet-pack which is where the tribes/Unreal influence begins to creep on. You have a health bar, and a power bar. The power bar is important because it powers everything, guns, jet pack, shields. It regenerates quickly, but you definitely need to keep it in mind at all times. Mastering the 3d movement with the jet-pack is key to this game. It is also extremely fun. The controls aren’t at all clunky, I found them very smooth and responsive. 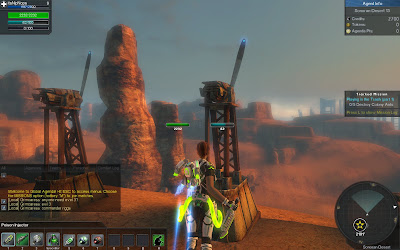 Once you finish the opening mission, you go to Dome-City. This is a rebel town and kind of the game hub. The main faction leader is there along with shops, places to queue up for PvP, etc. From here you can travel to various mission areas. I chose the desert area, which you can solo in as I wasn’t going to have time to get wrapped up with a group. So far it is a lot of fun. There is collection quests and the like, as you find in any RPG, but most have been fun and more challenging than World of Warcraft’s quests. There are talent trees but it looks like you don’t need to worry if you made a mistake at first because you can reset at any time. Loot is automatically picked up for you which is awesome, as looting is frankly a pain in WoW. Players can get friends together and form guilds as well as do instances and “raid” type content.
I am level 9 and so far I am enjoying the game (level cap is 50). It isn’t blowing me away in any areas, but overall it is a solid game. If you want to delve into an MMO but fantasy wasn’t your thing, definitely give this a look. Even if you are only looking for a distraction until all the big Fall titles drop, download it and give it a go. If you really enjoy it, upgrade to the Elite pack. The one time feel will be worth it for leveling 2 times as fast.
For Free-to-play Global Agenda is definitely worth a look.