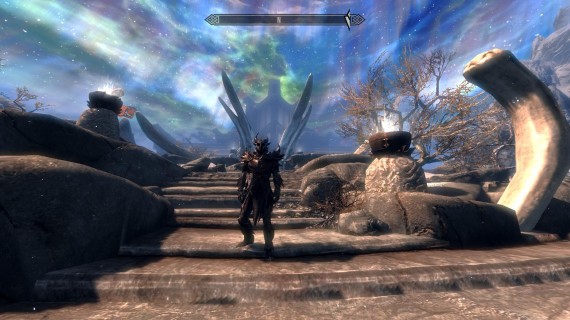 Skyrim has become the most played game on Steam in quick fashion.  The game is consuming lives left and right, even among the KBMOD crew.  Now, Bethesda says there will be even more reason to love playing this game on the best platform.

In the coming weeks, the PC patches will become very frequent.  There is already a patch for next week (from Bethblog):

We anticipate it will be up on PC first, and then hit PS3 and Xbox 360 later in the week. Among other things, the update will fix issues like magic resistance not calculating properly and the rare, amazing backwards flying dragon. Once the update is released, we’ll share the full release notes.

After the holidays, we’ll continue to release regular updates for the game — through full title updates, as well as incremental “gameplay updates” to fix whatever issues come up along with rebalancing portions of the game for difficulty or exploits. We plan on having a lot of these, not just a few. Overall, you should expect updates to be hitting the PC and Steam earlier and more often, as that’s a process we control. Console updates will follow, as they must be certified and processed by those manufacturers.

To go along with this Bethesda have taken notice of the huge modding community which has grown around the game.  There were 100+ mods ready just after launch.  In Bethblog they announced they will be giving out tons of support features for modders.  The Creation Kit (all the tools Bethesda has for the game) will come out on Steam as a download.  Modders will be able to use everything at Bethesda’s disposal to create the very best mods possible.  Furthermore, Skyrim will feature Steam Workshop support so that modders can get their content to users in a more direct way, although websites such as Skyrim Nexus (what I used for Oblivion mods) will still be hubs for mods.

This openness is exactly why we love PC gaming.  Bethesda can work with the community on a much larger scale, with greater control, interaction and urgency.  Kudos to them for taking care of the PC platform and not seeing it as an afterthought.

One Response to Skyrim Devs Show Commitment to the PC