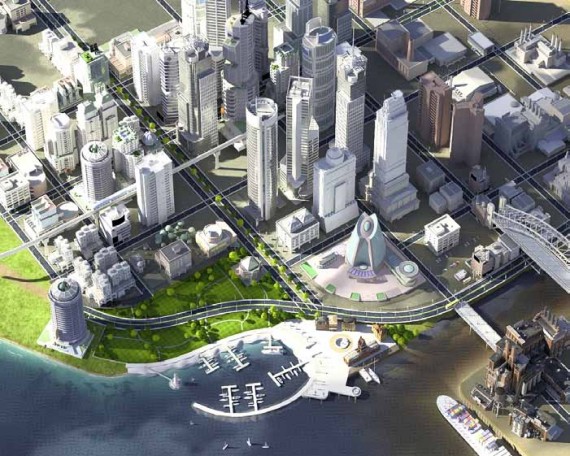 When the developers at Maxis said decisions in SimCity would affect individual sims, it appears they weren’t kidding. The game’s brand new engine, titled Glassbox, is a huge leap forward in intelligent simulations. For players who found SimCity 4 to be a bit too complex, GlassBox aims to simplify things and simultaneously give players data that’s more accurate and easier to read.

PC Gamer detailed the engine today, and it can only be described as amazing. Writer Tyler Wilde got to see the engine in action and said it works unlike any Sim game before it:

The previous SimCity games rely on relatively high-level statistics to tell us what’s going on–the pollution number goes up, so the happiness number goes down. GlassBox does the opposite. It simulates the little things–thousands of individual Sims–and lets the city mechanics emerge naturally.

Each time a Sim enters a store or enters a high pollution zone or a high crime zone, their individual experience will tell the story, not just some status bar.  Glassbox can simulate tens of thousands of sims at once, providing extremely accurate pictures of what is going on in your city.

All this data collecting isn’t just behind the scenes either. Every sound and graphic in SimCity will have a purpose, meaning no extraneous or ambient sounds for their own sake: “The jingle of a shop’s door is a Sim entering, and the sound of a cash register is a purchase being made. A power plant’s smoke puffs represent pollution entering the atmosphere, and the size of its coal pile represents its current supplies.”

All of this translates to your cities feeling more like the living, breathing organisms that cities are in reality. Living in a large city myself and being an avid SimCity fan, this is a huge change in feel for the game. In the older SimCity games, everything just felt like data, and I really couldn’t have cared less about the sims themselves. Appearances were just that; beyond the occasional natural disaster, I was only really concerned with how my cities looked. The new SimCity aims to draw us in more to the city itself, giving meaning and importance to the individual stories and experiences of our cities’ inhabitants.

To top all this off, we receive news that should be music to the ears of PC gamers everywhere: Maxis is building the GlassBox engine with the modding community in mind. It’s still in the early stages of development, so there’s no word on an SDK as of yet, but at the very least, it will be mod-friendly. Slated for a 2013 release, SimCity is still a ways off, but this is more exciting news for an already-exciting title. We will certainly be posting more on this game as more details are released, so stay tuned!

5 Responses to SimCity’s Glassbox Engine is Ambitious, Moddable, and Amazing