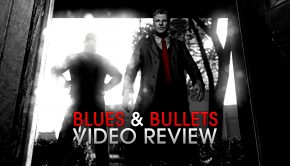 On top of our detailed written look at the first episode of Blues and Bullets, we’d like to bring you the condensed