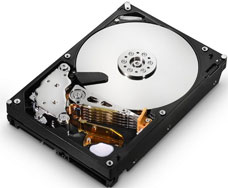 Looking for something to store MASSIVE amounts of data on? Hitachi has officially won the race to 4TB in a single 3.5in drive.  It had been spotted as available friday from online vendors in Japan for the equivalent of $345 US, prior to the official announcement from Hitachi.  It’s only a matter of time before the Hitachi Deskstar 5k4000 reaches other markets at a likely MSRP of $399 per Guru3d

Due to flooding in Thailand, hard drive prices have been greatly inflated and even 1TB drives have been consistently over $100. The near-$400 price tag does not entirely surprise me – 4TB in a single 3.5in form factor saves a significant amount of space and power, and generates less heat.

The flip-side is that this particular drive is not very quick – equipped with Hitachi’s CoolSpin technology, the 5k4000 has a 5900 RPM spindle speed, 32MB of Cache and a SATA 6gbps interface. I’ve not been able to source a benchmark, but it’s certainly not going to compete with the likes of the Western Digital Caviar Black.  If you’re looking to store a TON of movies, music, and especially game play recordings, this might be one to add to your build.

5 Responses to Hitachi gives new meaning to “Big in Japan”