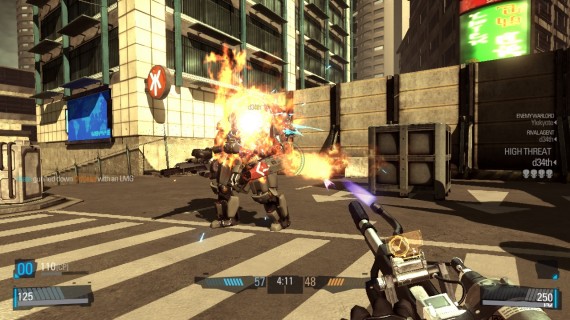 Zombie Studios has been hard at work refining its upcoming game, Blacklight: Retribution, and to that end, phase 4 of the game’s closed beta launches tonight around 8PM EST.

Phase 4 will be introducing the first aspects of the pay model for Blacklight. Each player will be given 5000 test Zen (the in-game currency) with which to buy weapons, armor, and cosmetic items. You still cannot purchase anything with real money as of yet, and we don’t yet know whether the buying system will focus on permanent purchases or rentals. Either way, this phase should give us a good indication of how the pay structure will work upon the game’s launch.

Perhaps the biggest change in this phase of the beta is the inclusion of the anti-cheating tool Punkbuster. Though the game already includes a game mechanic that allows players to see through walls, there were apparently major issues with people who could shoot through walls, which led to the decision to employ an anti-cheat measure. Having used Punkbuster in Call of Duty 4 for years, it can be aggravating at times, but I suppose it beats having the game ruined by cheaters. If you don’t have Punkbuster or aren’t sure if your version is properly updated, you can go here to download it.

New:
-Players now get CP for killing Rival Agents.
-Players can now activate Hardsuit Ping tactical item when in a Hardsuit with either the HRV key or the tactical key.
-Turned up 1st person assault rifle audio.
-All weapon mods can now affect the visual tight aim recoil.
-Change detailed stats on scoreboard/playerlists to popup into the item list and not down.
-The detailed stats now auto popup in the scoreboard if the scoreboard is left open for 1 sec.
-Some visual changes to the detailed stats popup.
-Changed Teamspeak audio settings to conform to the standard 0-10 values.
-New Depth of field post process effect.
-New Burstfire Rifle audio added.
-Added new grenade sounds.
-HUD chat now has 128 char limit and wraps.
-HUD now has new combat log design.
-Added new combat rifle audio for 1st and 3rd person, with near mid and distant blends.
-Added support in video settings for borderless windowed mode.
-Added more audio bite to the LMG.
-Added new widget for resolution selection in video settings.
-Added new Bolt-Action Rifle audio for 1st and 3rd persons, mid and distant versions.
-Added a unique explosion for the grenade launcher.
-Items unlocked via the skill tree are now unlocked via rank. Skill tree has been removed.
-“Server Browser” button is now called “Play Game”.
-Audio tweaks to the HE and Frag Grenades.
-Intermission now flashes when match starts.
-Time to scope in and time to tight aim mod stats now added to stocks and scopes.
-Added support for purchase-time item activation.
-Added a successful purchase message even when item activation fails.
-Changed quick-purchase options to preferred purchase options.
-Armory and store now communicate what the unlock requirements are for each item.
-Added new Burstfire Rifle animations for first person.
-Added new sounds for the grenade launcher and the airstrike.
-Added support for modification of the crosshair/reticle from the settings menu.
-Added new HRV Duration stats for pawn mods.
-Changed our dialog box appearance.
-New Shotgun fire audio.
-Player dialog added for impacts and hit effects.
-Added crosshair colors.
-Added new Shotgun audio to the game.
-Smart reticle enable/disable option is now changed to an opacity value.
-Added green Blacklight skull emblem.
-Added filters to Customization: “Hide Locked” and “Only Owned”.
-Updated Exit Game button icon.
-Updated Server Browser to show what was being sorted by. Player can click to change sorting options.
-Added idle kicking. Players who haven’t spawned in or moved for 3 minutes get the boot!
-Added new camera for character creation process.
-Changed default colors of character.
-Changed server sorting dropdown to account for UI changes.
-Updated SMG third person reload animation.
-Added new silenced Combat Rifle and SMG audio.
-Added a “Do you want to apply changed settings” dialog to video settings when trying to navigate away with unapplied changes.
-Intermission now shows the result of the map skip vote. Whether it failed or succeeded.
-Auto weapon switch now controls all auto weapon switching. Enabled means you will auto switch at weapon depots as well as when running out of ammo. Not auto switching means you won’t do either of those.
-Added audio for a headshot.
-Added new audio for the Burstfire Pistol.
-Hooked up new node count widget that shows how many nodes are capped by each team.
-Removed “thought they could fly” when changing teams.

Fixes:
-Messages in chat will no longer appear in the after action report.
-CP is no longer gained from inactive TKOTH points.
-CP is no longer gained from a TKOTH point after the game ends.
-Can no longer deploy barricades or turrets while in the air.
-View Last Match should be functioning correctly.
-Settings menu remains responsive after opening the loadout or clicking on a player during intermission.
-During intermission, the loadout screen now correctly transitions to Customization.
-All muzzles should play their correct sound effects.
-Depot item prices in Customization now correctly match their in-game values.
-Removed duplicate chat channels that showed up when reopening the social tab.
-Crouching players can now enter hardsuits.
-Deathmatch is now scored correctly.
-Items should now last their full durations.
-Various grammatical errors.
-Helmets no longer occasionally reappear after being headshot.
-Hacked points are now recorded correctly if you run away before the point captures.
-Stats in Customization now update correctly when you select items.
-Can no longer activate items beyond the maximum amount allowed.
-Animations for the .45 Pistol have been adjusted.
-Camo can now be seen in 3rd person on the 9mm Pistol.
-Improved team balancing between rounds.
-Footstep audio has been added to some areas that were missing it.
-Customization will no longer crash with the details tab open.
-MLAA is now working properly.
-Frag and HE grenade stats should now be listed properly.
-Player names are now hidden by Digi Grenades.
-Crosshair will not turn red when spotting enemies through Digi Grenades.
-Changed SMG audio.
-Rockets will no longer blow up when a teammate runs in front of it.
-Combat log colors have been corrected in Deathmatch.
-Extra CP will not be given from team switching suicides.
-Fix for some textures being corrupted at low texture settings.
-Gear items now show proper emissive colors when being held by an enemy.
-Gray lines should no longer appear after HRV use on low settings.

Balance Changes:
-Electro ammo now does 120% damage to Turrets and Hardsuits and no longer slows down players.
-Increased cost of Rocket Launcher. Reduced the total rounds.
-Equipping a barricade and having it on your back will now impact your run speed. The speed penalty is removed once the barricade is deployed.
-Improved Assault Rifle spread.
-Reduced damage of Burstfire Rifle.
-Reduced movement speed of associated with some weapons.
-Increased Combat Rifle damage and improved spread.
-Players will no longer be removed from Tight Aim when shot while using the Bolt-Action Rifle.
-Barricade no longer persists through death.
-Barricade now reduces damage taken while on your back by 70% instead of blocking 100% of damage.
-Tactical gear items do not get replenished by using Ammo Refill at a weapon depot.
-Adjusted scope stats.