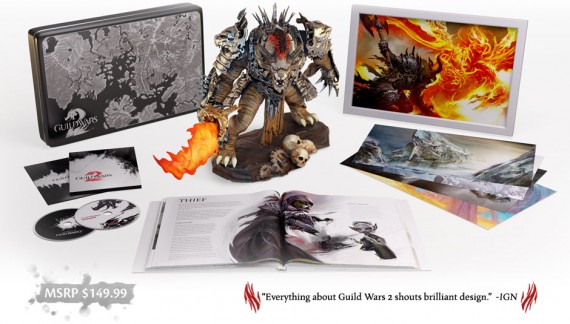 Guild Wars 2 will be available for pre-order on April 10 with bonuses for reserving your copy early. There are three tiers for pre-orders and currently no vendor-specific rewards (hopefully it stays that way).

First off is the standard digital edition ($60), which includes beta access and a three-day head start in the game before the official launch date. You also receive a stat-boosting item for your newly created Guild Warrior.

Next up is the Digital Deluxe Edition ($80), which nets you everything in the standard version, plus:

Pre-order bonuses are a pretty standard practice at this point, but certain aspects of these packages concern me slightly. Providing bonuses like a stat boost and an offensive spell for pre-ordering introduces the potential for unbalanced play, which is already a large concern to begin with in an MMORPG. Hopefully ArenaNet has already thought through the possible balance concerns with these pre-order extras, but it is something to think about.

You can read more details on all three editions at the Guild Wars 2 official pre-purchase page.