When we first heard about Hawken a couple months ago, I was ecstatic that someone was going to finally revive a mech combat genre that has been practically extinct for a decade. After hearing the project got a huge infusion of funding, I was even more excited. I was fortunate enough to attend the Hawken PAX East party this past weekend, and after spending some time with the game, I think it’s safe to say that Adhesive Games and Meteor Entertainment may well have a hit on their hands.

John and I arrived at a Boston bar and were escorted to a back room with food, drinks, pool tables, and twelve PCs loaded up with Hawken ready to play. This being the first exclusive play test I’ve ever done, I was pretty damn excited. When I finally sat down at a PC, a sheet on the table showed me all the key bindings, and the loadout selection screen was on the monitor. 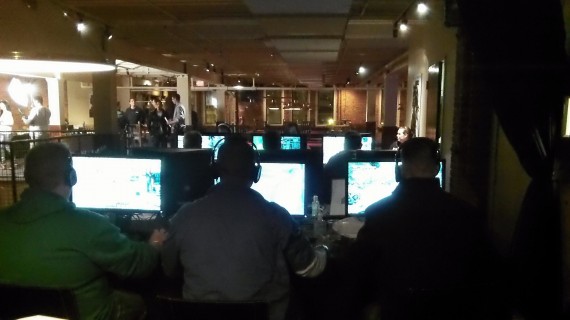 The loadouts we had to choose from included Light Close Range, Light Long Range, Medium Close Range, and Medium Long Range. I only played the medium mech, which has more armor than a light, but sacrifices some mobility by comparison. John played both light and medium, saying that lights are definitely more maneuverable and probably better overall for a new player.

Within each loadout, you get different main weapon and special weapon choices. The main weapons were varied, including a vulcan cannon that had to spin up before firing and a flak cannon that functioned like a shotgun and made quick work of enemies at close range. Main weaponry is also limited by overheating as a way to discourage mass weapon spamming. Special weapons consist of items like a powerful single rocket or a swarm of missiles. These weapons only have three or four charges (which replenish over time), but they can lock on to a target and unleash heavy damage. 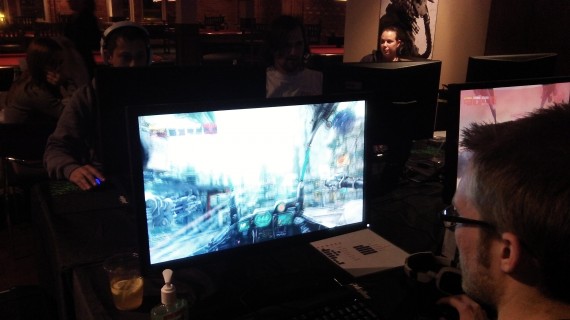 The controls for Hawken are your standard first-person shooter configuration with a few exceptions. First, the movement is a bit unique since you’re controlling a mech instead of a human. As such, you use space bar to hover in short bursts (rather than jump), which you can use to get on top of buildings or try to dodge fire in midair, similar to Tribes: Ascend. You can also press C to repair your mech mid-battle, but you’re left completely vulnerable for about five seconds, so you’ll want to find a safe hiding spot before doing so.

As with many other first-person shooters, you can sprint by holding down the Shift key. However, pressing Shift + S activates an interesting movement feature: Rather than sprint backward, this key combination makes your mech do an instant 180 degree turn. The devs said they made this change after finding that turning around was sluggish due to the physics of the mech (they called the old system “the knuckledragger”). It’s clear that there are some design challenges to overcome when you’re controlling a machine with an independent top and bottom half.

Though this was a very early build of the game, the graphics are stunning. The Unreal Engine can be pushed pretty hard, and Hawken takes advantage of it. From the cockpits to the exterior, the mechs are very detailed, and having different cockpit HUDs for different mechs gives each mech its own unique feel. The game itself ran very smoothly on what we believe was a GeForce GTX 560 Ti, an unequivocally good sign at this stage in development.

Though the map we played was an industrial wasteland with a somewhat dreary palette, there was never a dull moment with mechs running around among constant explosions. Judging by the trailer, it looks like we can expect other maps to feature varied color schemes.

Everyone from the development team behind Hawken was eager to talk about the game and get players’ honest reactions. I got to speak one-on-one with lead developer Jason Hughes, who was adamant about receiving feedback from this demo and genuinely wanted to hear my first impressions. Seeing a developer with this kind of attitude is a great sign, as we’ve seen two other recent free-to-play titles (Tribes: Ascend and Blacklight: Retribution) that have benefited immensely from honest and open community interaction. 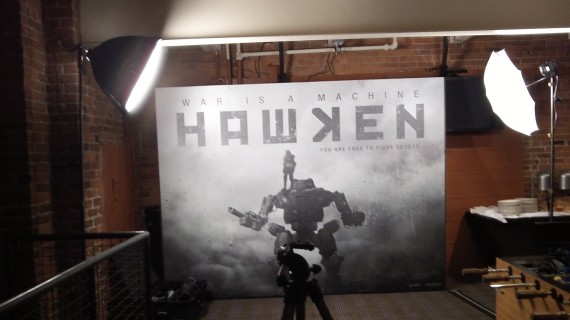 We don’t have many details on Hawken‘s payment model, but I’m sure those details will come to light as development progresses. The official release date is December 12 (12/12/12), but beta should begin soon. You can apply for the beta now over at the official Hawken website!

Check out all of our PAX East 2012 coverage!