Edmund McMillen has been dropping Rebirth information for months over on Bindingofisaac.com but now we have our first real video of the game.  We get a couple minutes of what Edmund describes as the “near final state” of the game.  The biggest thing I noticed is the revamped sound even more than the visual changes.  New sounds for secret rooms, enemies gibs and of course the new music!

The game will have double the size and nearly twice as many items as the original.  This game is definitely one of KBMOD’s most anticipated upcoming games with several members clocking triple digit hours in the original.  I look forward to local co-op play popping up on our Twitch channel!

Rebirth still doesn’t have a release date but is speculated to be out in late 2014 or early 2015 for PS4, PSVita and PC. 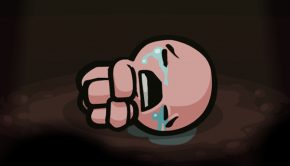 The Binding of Isaac: Rebirth Release Date Trailer is F**ked →

The Binding of Isaac DLC Coming May 28 →