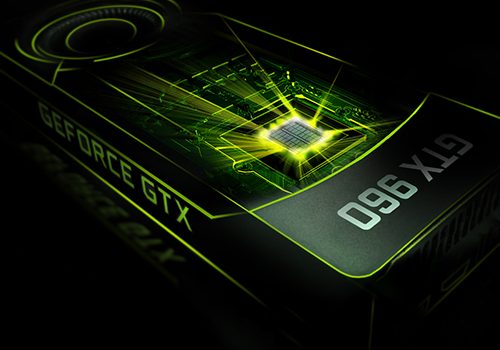 NVIDIA has said that the GTX960 is the spiritual successor to the GTX660 rather than the GTX760. Early results from one of my personal favorite review and benchmark sites, PC Perspective, seem to indicate that it is indeed on par with the GTX760 if not holding a slight overall advantage. You can see their testing procedure and results here. Some of the more memory intensive tests show a significant advantage, thanks to its 7GHz GDDR5.

The GTX960 does have some pretty intriguing features, as well:

At 120W TDP, it operates cool and quiet – some of the reviews that I’ve found have noted that several of the models (ASUS Strix DCUII for example) operate so quietly that you can barely tell they’re operating. As a testament to Maxwell’s efficiency, ASUS has even set their Strix DCUII model to operate in passive cooling mode at temperatures below 55C. Sounds to me like it’s the perfect HTPC GPU.

I did find some preliminary GTX960 SLI benchmarks from Techspot.com – the results are a bit difficult to decipher. It appears the benefit is in the 60% to 80% range overall, and depending on the game it can vary between holding a slight advantage over the 970, to besting even the 980. As with every build guide we’ve ever done, everyone here will recommend that you plan and budget for the best single-card solution that you can. In this case, I would recommend buying a 970 ($329-379) over two 960s (around $398) out of the gate.

[Update – 1/25/2015] – After scouring the internet for an opinion that mirrors my own, I stumbled upon this rather handsome gentleman conveniently sporting quite the dapper KBMOD T-shirt – check our our buddy Paul‘s take on GTX960 SLI (make sure to like/favorite/subscribe!):