The Trine series has been a particular favorite of ours here at KBMOD, but it has now been over 3 years since Trine 2 was released.  If you’ve been awaiting a new game in the series or had forgotten about it (it has been a while), today is a great day.

Trine 3 has been announced by FrozenByte and right in line with the previous games, this trailer is gorgeous.  Trine has always had excellent aesthetics and that looks to continue in the third installment.  Although no exact date was announced, the game will release in 2015 for PC. 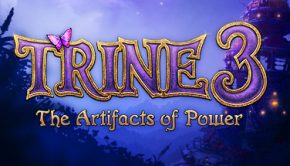