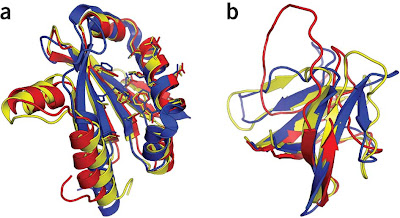 Here’s some ammo for that infinite struggle: players of an online game called Foldit have helped to recreate the structure of a protein that has baffled AIDS researchers for years. As published in a Nature Structure and Molecular Biology journal article, players were challenged by researchers to produce an accurate model of the crystal structure of M-PMV retroviral protease.

“But I don’t play, Foldit” you might say.  How about Portal?  As mentioned earlier, Portal is now free until September 20th as part of an educational promotion dubbed Learn With Portals.  This is part of a larger educational technology initiative rolled out by the U.S. Department of Education with congressional support.  You can read the official White House Press Release here.

Leading Video Game Company Establishes Education Prize: Valve, creator of best-selling video game franchises and leading technologies, is stepping into the educational arena due to interest from teachers, students, researchers, and fans after the release of Portal 2, a brain-challenging puzzle game.  Valve will run a competition next year where middle- and high-school students and teachers can create levels of Portal 2 to be used in the home and classroom while competing for prizes worth $250,000.  As a start, Valve will be giving out free copies of Portal, the first in the series, which is rated for teens.  For more information, go to: www.learnwithportals.com

And finally, the www.extra-life.org marathon – a Children’s Miracle Network fundraising event.  As we mentioned on Friday, KBMOD contributors and subscribers will be participating in two ways: joining team KBMOD.COM or donating to the team member of your choice.

We’ve just cracked $1,000 raised for Children’s Miracle Network hospitals throughout the country, though the top team currently sits around $5,400 – we have a long way to go.  Please get the word out and help support children and families in need.  Ask your mom for a donation while you’re at it.