>The Re-emergence of the PC.

>Tom Chilton knows a little bit about PC gaming.  He’s the lead developer on World of Warcraft, a game that I called one of the most important in gaming history.  Recently WoW has finally begun a downward trend in subscribers.  This might look like cause for concern for Chilton and WoW, but he is looking at the bigger picture.  The platform.

“In a lot of ways I see the PC as potentially a re-emerging sort of platform.  I think that the PC has always offered ways to approach games that you can’t necessarily approach on console, even if it’s just because of UI restraints. . .I think that combined with the digital distribution in a lot of ways has the potential to me to make the PC a really strong gaming platform going into the future.”

A re-emerging platform?  Well this is a welcome perspective from one of the largest developers in the business.  When others are seemingly making half-assed ports, Blizzard never compromises the PC.  They focus on this platform only, I can’t name the last Blizzard console title.  Clearly Activision hasn’t infected them yet.

The PC is a very misunderstood platform, partly because of it’s supporters who miss the point frequently.  The main advantage of the PC is lost beneath the arguments of control accuracy and graphical excellence.  These are both great advantages, with control being the most tangible difference.

Neither of these is really the main reason I play PC.

The complete customization, as Chilton said, of a true PC title that is what makes it great for me. World of Warcraft is a prime example.  Thanks to mods you can customize the look and feel of the game completely to what you want.  You can have as little or as much on your screen as you want.  Blizzard has even rolled several mod features into the game itself to make it even more user friendly.  Not every game lets you go into that amount of depth, but most allow remapping of controls.  Many also allow scripts, such as the buy binds of Counter-Strike.  Promod configurations for CoD4 are absolutely necessary for the feel of the game.  Almost every setting is tweaked for speed and smoothness.  All this helps to make the game feel more like your game rather than someone just forced it on you.

Recently Blizzard hasn’t been the only developer that has said this, just one of the biggest.  Epic Games recently said they will be refocusing around the PC as their main platform.  I hope Tom Chilton is right.  Maybe his subscribers are playing other PC titles or waiting for the next big one, and that’s where they’ve gone.  If so, more power to them.  Hopefully, because you’re here, on this site, you’ll be a part of the resurgence of PC gaming.

After all, Keyboard + Mouse or Die.

5 Responses to >The Re-emergence of the PC. 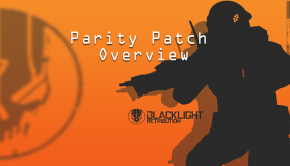 Everything you need to know about the Blacklight: Retribution Parity Patch →