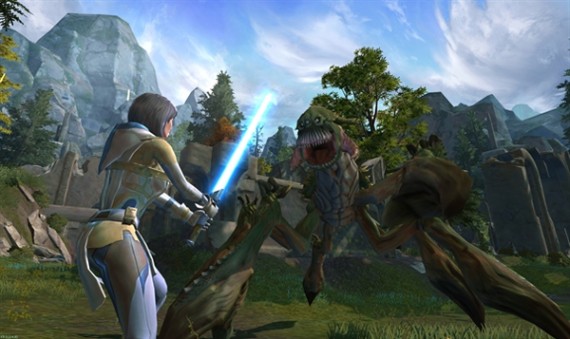 Apparently players in Star Wars: The Old Republic are being temporarily banned or warned for ‘exploiting’ some loot containers on a high level planet. The planet is Ilum and it is meant for level 40+ players. Players who were lower level were essentially running and grabbing the loot containers and unbalancing the economy with this container farming. There was no warning not to do this and nothing preventing a lower level player from traveling to the planet to get to the containers.  This seems like players making a “clever use of game mechanics” as Blizzard would have dubbed it. Here was the official dictation of why the bans happened from CM Stephen Reid:

“To be completely clear, while players may choose to travel to Ilum earlier than the recommended level (40+) and may loot containers if they can get to them, in the cases of those customers that were warned or temporarily suspended, they were systematically and repeatedly looting containers in very high numbers resulting in the game economy becoming unbalanced.”

If Bioware didn’t want low level players there, just close the planet to lower levels, or remove the containers, or put enemies around them.  Instead they opted to ban players after the fact. I doubt these people went there to “unbalance” the game economy. Of course blatant hacks or exploits should be punished, but not when players don’t know they did anything.

Blizzard had a similar situation in World of Warcraft with a flood of gems during the Burning Crusade expansion due to rogues farming a certain instance (Mana Tombs).  You aren’t meant to be in there alone to farm the chests, it wasn’t built for that.  But you could. Blizzard never threatened to ban or warned anyone. They acknowledged the farming and simply patched out the drops of gems and lowered the gold in the chests.  This is the right way to go about this.  They owned up to their mistake of allowing players in.  No one got banned or warned.

Making ex post facto temporary bans and warnings for something players had no idea was wrong isn’t the best way to make an impression. It feels like Bioware sending a message at the start of a new game to potential exploiters or hackers.  If this is the case, it shows they are serious about keeping the game clean. Any ill will can be forgiven.

SWTOR has gotten great reviews since coming out from almost everyone.  Let’s hope this is just the growing pains for a new MMO.