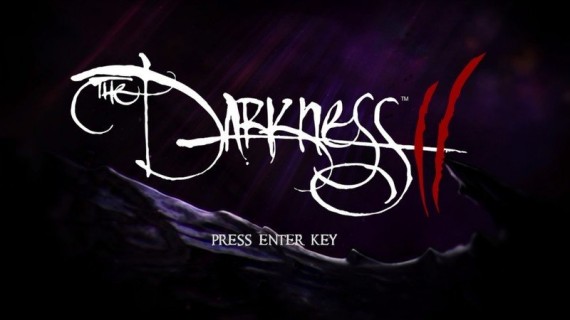 Historically, first person shooters miss the mark when trying to develop an engaging single player campaign. All too often the storyline and gameplay collide to produce a tedious experience. The Darkness 2 has managed to sidestep this issue; introducing new gameplay mechanics that keep the game both gruesome and entertaining. The game isn’t without serious faults, but can present itself in some very appealing ways.

Surrounded by Italian stereotypes so overt that they border on parody, you fill the role of Jackie Estacado. Jackie has risen through the ranks of the mob, securing its highest honor, The Don, using the powers of “The Darkness.” The game opens two years after the original title – a console exclusive.  For those of us who had skipped The Darkness, the developer has graciously seen fit to include a “Previously On” option that rapidly brings you up to speed. Jackie is plagued by an ancient force known as “The Darkness” and following the last games events, he has sworn to keep this evil locked away inside him. “The Darkness” is in a constant state of revolt – attempting to escape. After a spectacular beating, Jackie can no longer contain its power. “The Darkness” manifests in Jackie once again to help him track down the unknown assailants. Not only does Jackie have to overcome these outside attacks, he must confront and stop “The Darkness” from taking him over completely.

As a whole, the plot of The Darkness 2 is satisfying, though a little rough around the edges. The end of the game is where things really begin to unravel, but is still a step above the standard fare available in today’s shooter heavy environment. 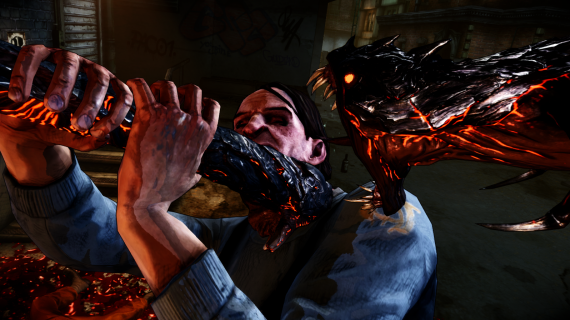 Departing from the style of the original game, The Darkness 2 employs a cel-shaded, comic book art style. While some of the textures aren’t quite up to par, the style lends itself fairly well to the content of the game. Many fans of the original were put off by the stark change in graphical styles, but it could be argued that less is more in this case. Using a style that traditionally is used in high fantasy, the violence can be very over the top. When a thug is sliced in half vertically with a demon’s arm, the cartoonish style is a welcome departure from ultra-realistic gore. While the red mush you leave the remains of your enemies in gets the point of gore across just fine, the stylized violence keeps you from losing your lunch. 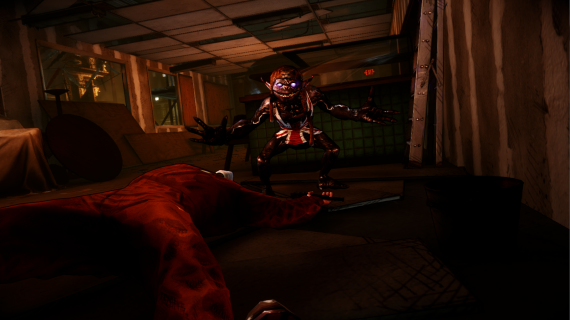 The gameplay is the real staple for The Darkness 2. Gunplay is solid and responsive, and there are plenty of new weapons to find and collect along your journey. Sadly all the guns feel similar, though they aren’t carbon copies. However, when you have a choice between bullets and two giant demon arms protruding from your shoulders, which are you more likely to use? The arms have a series of attacks, both vertical and horizontal slashes, throwing objects such as cars and saw blades, and brutal executions once your enemy is vulnerable. Completing different attack combos give you “essence points” which can be used to buy new abilities and upgrades. After a couple upgrades, you’ll be dual wielding your guns alongside your enhanced Darkness powers to create explosions of blood and brutality. 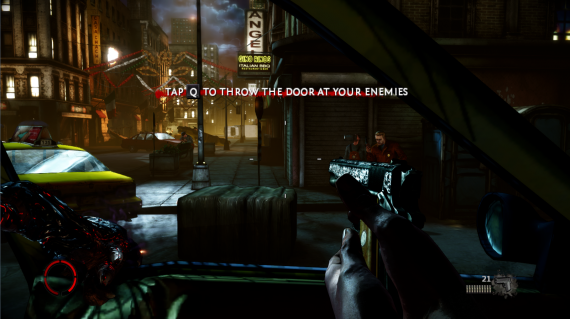 While the gunplay is a joy, some other areas of the game fall short, literally. The game was over far too quickly, and offers little in the way of replayability. One play through of the campaign should only take 5 to 6 hours solo. While there is also a co-op campaign option, it feels rigid and stripped down compared to the solo experience. It also doesn’t help there is no competitive multiplayer. On top of that, the Field of View in the game is very strange, almost telescopic. It took me around an hour to get used to it, and there is no option to adjust the FOV. There are unconventional ways to modify this setting, but the results are inconsistent or worse, crash the game completely.

The Darkness 2 is dense with story, though it often feels trite, and while the games mechanics are fun the whole experience is over rather quickly. Many will pass it over completely simply on the basis that there is no competitive multiplayer. If you’re looking for a fresh mechanic in the saturated shooter market, The Darkness 2 could be just the game you’re looking for. However, at its current price point, I’d suggest waiting for a sale before picking it up. All things considered, I give The Darkness 2 six out of ten overtly stereotypical Italians.

5 Responses to KBMOD Reviews The Darkness 2