Well, it’s been a busy night, folks.  Sony has officially unveiled the next generation Playstation at their press and developer event in NYC.  Even our favorite beard, Jared Gerritzen was invited for some reason.

Normally I wouldn’t do this, but sometimes you have to capture the hilarity and mockery, and run with it.  I’m sure someone, somewhere, was actually excited about the PS4, but the PC master race was out in full force.  I wouldn’t say that we came unhinged but they just gave us so much to work with.

This was not a surprise considering the new hardware that the PS4 is sporting – essentially trickle-down PC parts as detailed by Anandtech.

note: You’ll have to forgive me if this gallery isn’t exactly in chronological order, I did what i could with the screen captures. 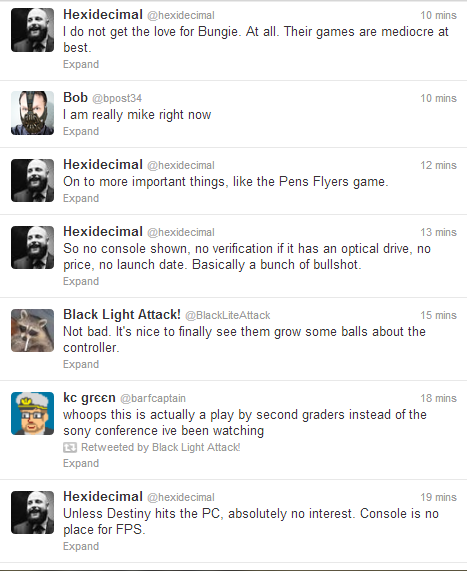 3 Responses to Twitter Highlights – KBMOD (and friends) react to PS4