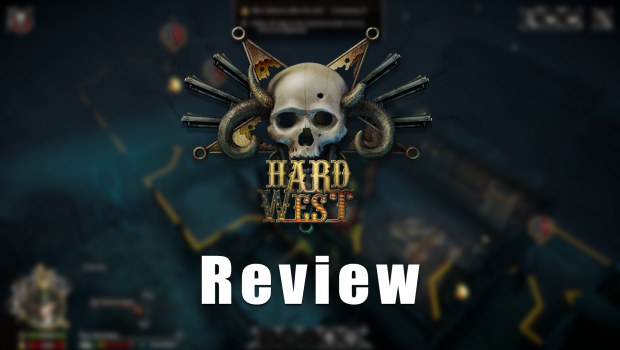 If you were anything like me growing up, at one point during your childhood you had a fascination with the Wild West and had some sort of desire to be a cowboy. This interest in that time period has always stuck with me even into my adult years. So anytime there is a video game set in the Wild West I am immediately intrigued. Hence why as soon as the opportunity was presented to give Hard West a review, I jumped on it right away.

Hard West is a turn-based tactical game, much like the X-COM series, set in the Wild West era. Players follow along two different story lines; one being the tale of a father and son whose goal is to just make it to Oregon. The second is the tale of a scientist who inherits all of his rivals equipment and research, in exchange for continuing the work he had started. However, this research was to try and cure this wave of madness that has plagued the land and we quickly learn that supernatural forces may be at play. With a lone voice narrating, the story lines in Hard West are broken up into short one to three hour scenarios that delve deeper into the ever-progressing stories. 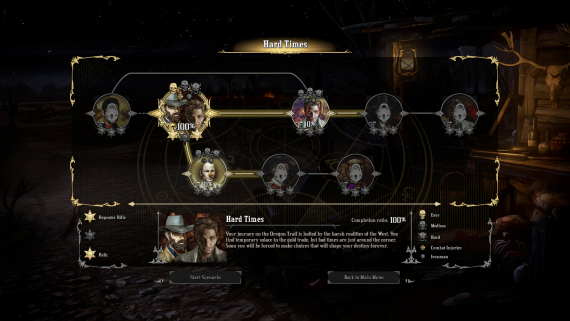 A large chunk of each scenario has a “choose your own adventure” type feel to them. Presenting players with a set of interesting, and often very dark, choices that they must make; some of those choices being a safe bet with minimal reward, while other choices give you promise of a greater reward but at a much greater risk to your character/posse. I ended up playing Hard West on normal difficulty and didn’t find the risks to my character so great that it deterred me from making this choice every time I had an opportunity to do so. Most of these rewards resulted in better weapons or trinkets for you to give to your posse, or just more gold which itself is used to acquires these items all the same. Unfortunately, this is the first spot where Hard West falls short and at the end of each scenario your character and posse are “reset”. I was extremely disappointed after starting my second scenario and found out that all the powerful weapons and trinkets that I worked for in my first scenario were just gone. This resulted in my disregard of some of the side missions in each scenario and asking myself “What’s the point if I don’t get to keep anything in the long run?”. 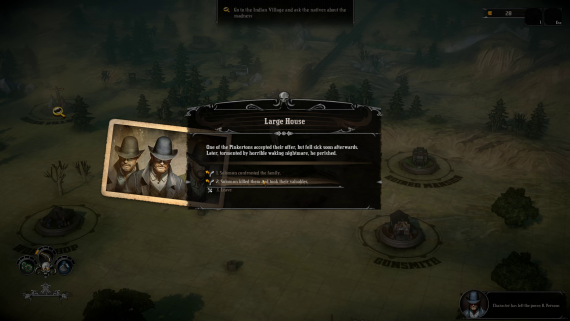 Thankfully, once I am into the combat missions I soon forget about the short comings of the over-world of each scenario…and start to deal the with short comings of the combat missions.  Let me give a quick overview of the gameplay in case you haven’t played this type of game before. You are set with a posse of one to four players and are tasked with a mission; generally it is to kill all of the enemies while picking up an item or two. Each character has two action points per turn that they can use to either move, use an ability, reload their gun, or shoot the enemies. After all the actions are used for your posse, the enemy has their turn where all the same parameters are set in play for them. 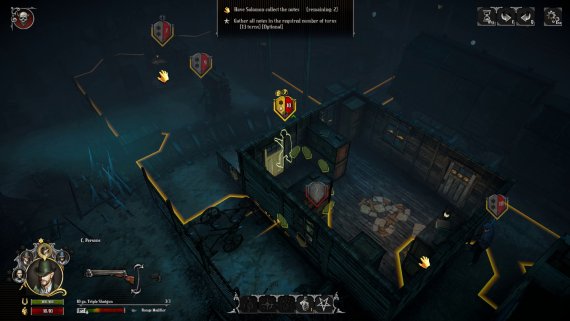 There is a very interesting mechanic built into this game called “luck” that brings a certain dynamic to the strategy of the game. How luck works is the higher a character’s luck is the less chance there is for them to be hit by a bullet. Subsequently, the lower a character’s luck the higher chance there is for them to be hit. This at least gives players a feeling of their fate not being completely decided by RNG unlike when playing a certain X-COM game. Luck can fluctuate one of three ways; your character being hit raises it, if a bullet is shot and missed your luck gets lowered, and your character can also lose luck by using special abilities provided to your characters. While a lot of these abilities are powerful and extremely helpful, they do cost quite a bit of luck to use leaving your character at a huge risk of getting hit by the enemy. 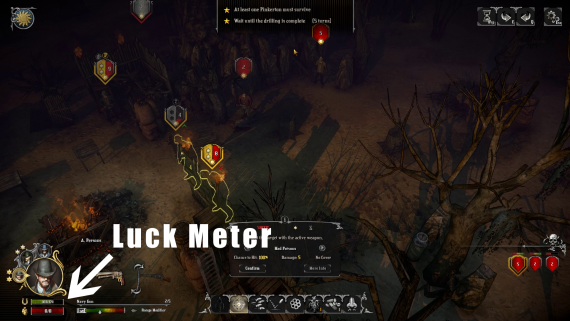 Now all of this may sound like it builds up to a bunch of elements that mesh into some real tactical battles, and it does, especially on missions where you have to move your characters to grab a certain objective. However, if you’re at the end of a mission where you are tasked with killing the rest of the enemies, a player’s best strategy is to just sit back and have them come to you. Running around trying to find the enemies is almost guaranteed suicide though because running past one causes them to reaction-shoot your character taking out a decent chunk of health. Some players may remember this as “over watch” from X-COM, the characters controlled by players do not have access to this ability and this can be extremely frustrating. There were multiple moments where I’d be caught with the enemies closing in but weren’t in line of sight to shoot. I wouldn’t be able to get in line of sight of shooting the enemy without getting shot by them, but I wouldn’t be able to put up any defenses either to shoot them as they walked by me. So I would be forced to stay and get shot in the face, or retreat and pray they move into my line of sight for the next turn only to drag out the combat mission a lot longer than actually needed.

As Hard West tries to tie RPG elements into itself there is no actual leveling up system involved in the game. Instead characters get their power ups and abilities through cards awarded to players through their choices and completing combat missions; each card has a base stat in the likes of health, luck, aim, or defense with a value from one to five placed on it. Cards thankfully aren’t character specific and mixing/matching the cards is actually encouraged. Stacking defense or health is a much wiser choice on a front line shotgun-wielder than, say, a sniper who sits in the back and would benefit from having a higher aim stat. 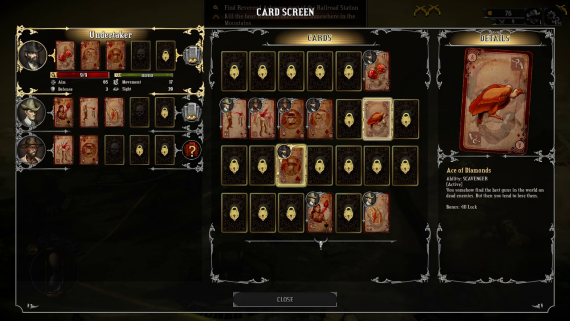 The abilities themselves were so unique and fun to use that they were actually how I picked my cards for my characters. An ability that gave my sniper a 100% chance to hit any enemy on the map, even if there was minimal vision on them, turned out to be my go to every mission. A notable mention goes out to the ability that let my character dodge any and all bullets for 2 whole turns as he rushed a “boss” and gunned him down with a shotgun. With other abilities that provide supportive stat boosts to ricocheting bullets off of buckets and hitting enemies around corners, the card abilities presented definitely open up different strategies that players can try and execute. Be careful, though. Each ability takes a chunk out of your “luck meter” leaving your posse open to greater chances of getting hit. Sadly, any cards you unlock do not carry over from scenario to scenario. Alongside all the gold and weapons that get wiped out, cards get wiped out as well. I really wish at least the cards would have carried over between scenarios, if only for the chance to mess around with all the different abilities.

From a technical standpoint it doesn’t take very high PC specs to run Hard West. I was playing on a 4770k, 8GB DDR3, and bouncing between SLI 970s and a single 970, but the minimum requirements are very low tier .

There were some hiccups here and there while playing the game, the biggest issue being when I would first launch the game. I would be forced to sit through all the opening videos because any time I would press ESC to skip them it resulted in Hard West crashing. A few other minor issues I had were in the inventory menus of the game; switching back and forth between the tabs available would result in the game to freeze for a few moments before switching to the desired tab. The combat missions had no issue at all oddly enough, considering this is where all the higher quality animations are.

Hard West is made up of A LOT of little individual pieces that work so well on their own, and while it all works together pretty well, I can’t help but feel there is something missing. I can’t help but feel like the complete wipe of inventory and power ups when moving from one scenario to another is what truly is missing for me. That all being said, at a $20 price point on Steam I still highly recommend this game to those who are interested. It is a PERFECT introduction to the turn-based tactical game genre for a person who wanted to play this style of game, but was intimated by games such as X-COM.  The gameplay itself is loads of fun and each dark scenario can be knocked out in one sitting if you’re someone like myself that lives that busy lifestyle.

Summary: With Hard West sadly falling short in multiple aspects of the game, all the little features that are done right are over shadowed by these flaws.

There Is Good Here!