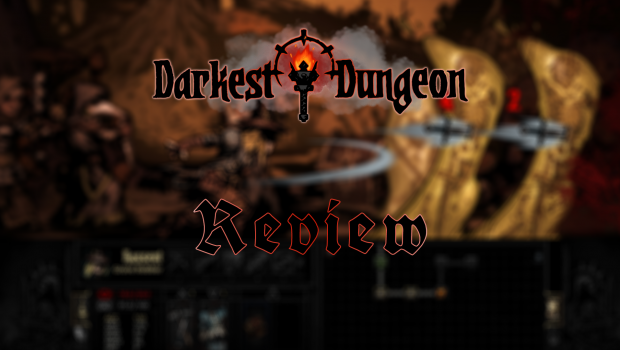 The time had come and I had finally reached “The Wizened Hag”, one of the numerous bosses in Darkest Dungeon. I cruised through this medium sized dungeon fairly easily, so I naturally went into the fight confident that victory would be simple and swift. I was wrong… dear God was I wrong… Despite how easily the team I had made sailed through previous parts of the dungeon, I had only one character that could attack “back row” enemies. The Wizened Hag sat in the back row, separated from my party by only a giant cauldron with 100HP, which regenerated back to full health every time she threw one of my party members into it. This defeat was one of many that I have suffered firsthand and one that I imagine countless others have experienced. 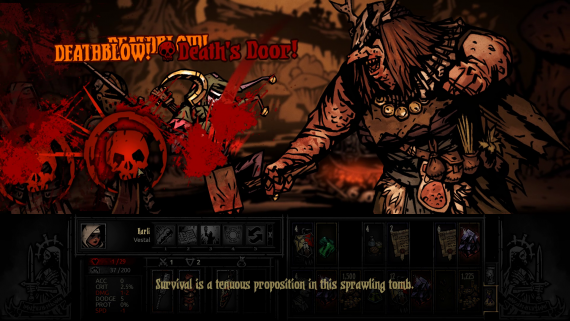 Darkest Dungeon is a brutal dungeon crawling experience; tasking players to recruit, train, and guide a ragtag group of heroes through Gothic themed dungeons to reclaim your family’s estate from the darkness that has taken over.

With turn-based combat and a behind the scenes D6 style roll system seemingly ALWAYS in the games favor, a large bit of strategy is required to ensure survival. Throughout the 5 themed dungeons, players are pitted against numerous types of enemies looking to cut their team down through various means. This could be through straight damage, throwing a debuff, or marking one of your heroes for death, causing all other enemies to focus on that marked target. 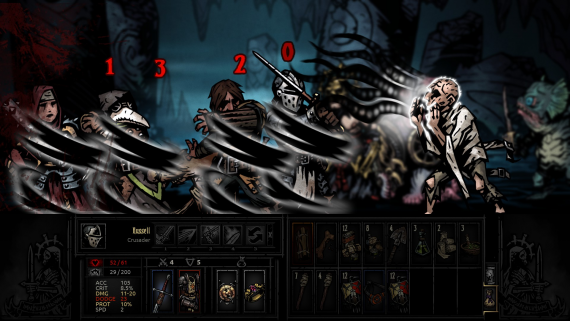 Despite those dangers, the deadliest of enemies are the ones that attack the stress level of your characters. Stress is a unique mechanic that explores the idea of how mentally damaging entering these types of experiences may be even for the mightiest of heroes. When a hero reaches 100 stress their fortitude is tested. They may become stalwart and receive a massive buff and stress relief… or they will more likely start freaking out and receive a massive debuff instead. It’s possible to also develop a rebellious attitude and start using whichever abilities they choose, making comments that begin to stress out the rest of the party. There are many unfortunate side effects to one of your heroes losing their sanity. 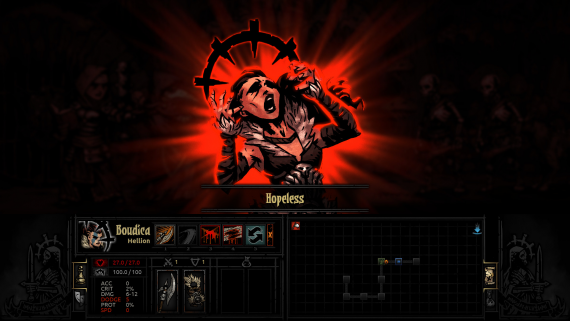 Before heading into the dungeon, players have a chance to shop for items that can help their heroes out on their adventure. This could be food, for when they get hungry with only one room left to explore, or some holy water to banish a pesky curse on a pile of valuable loot. There are plenty of items available to make your missions successful. The age-old saying “you have to spend money to make money” has never been truer when it comes to these dungeons. The most important item to purchase are torches, which are crucial to controlling light, which is another important mechanic to keep in mind while exploring dungeons. 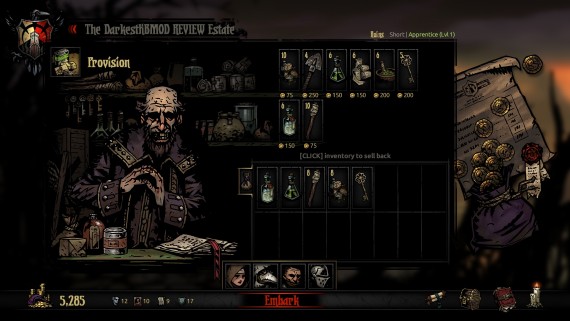 To travel through darkness or light the way, it really is your choice. If you decide to take the risk and take on a dungeon in complete darkness your rewards will be greater, as the chance to discover greater treasures is heightened in this regard. The downside, however, is that your heroes cannot see what is coming up ahead and may be surprised by an enemy group lying in ambush. If your group is startled, their positions may be scrambled, which can be catastrophic for your team depending on their unlocked abilities.

In combat, positioning is important for both your heroes and the enemies themselves. There are four positions for a character to be in, and different moves can be used based on where they’re placed. As players learn the game they will begin to recognize what moves enemies can use from these various positions. This knowledge is incredibly useful, as some heroes’ abilities let you change the position of your enemies with a pull or knock-back, thereby possibly forcing them to use an ability that is not as effective against your team. Another thing to note is that some abilities only hit certain characters based on their position, such as many melee attacks only hitting the first and second character on the opposite side. 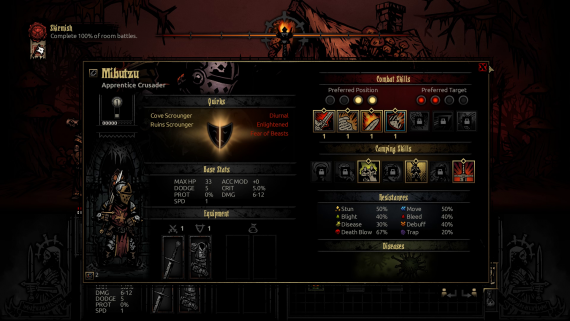 In town, players can use treasure gathered from their mentally challenging adventures to help prepare themselves for future successes in the depths. Your decisions here can make or break your entire save file. For example, if you send all your healers to de-stress at the same time, you are left with no one to keep your team alive during your next mission. Choosing what heroes you recruit from the Stage Coach is also key. You may love everything about the Bounty Hunter class, but a full team of bounty hunters will get you past maybe 2 rooms before you’re having a bad time. Upgrading heroes’ armor, skills, and treating their debilitating quirks are all done in the estate, and are necessary if you hope to have any chance of survival. 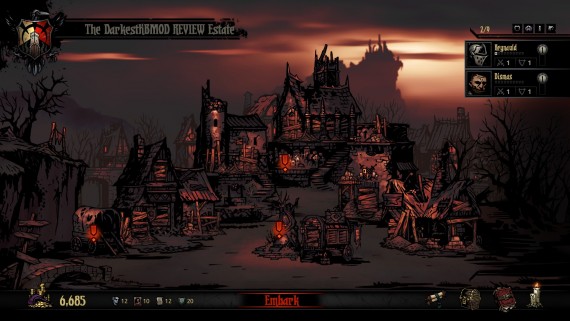 Red Hook Studios made an amazing game with Darkest Dungeon. It’s frustrating for sure, but amazing nonetheless. Coming in at $19.99 on Steam with reported 30-40 hours to complete Darkest Dungeon, I highly recommend purchasing if you’re looking for an in-depth tactics driven game with a unique Gothic art style that is dark but surprisingly pleasant to look at. The task may be daunting but the feeling you get when taking down a boss will definitely make it all worth it in the end.

Summary: A Gothic style thriller that tests players abilities to plan ahead and to keep their cool when everything starts to go wrong.