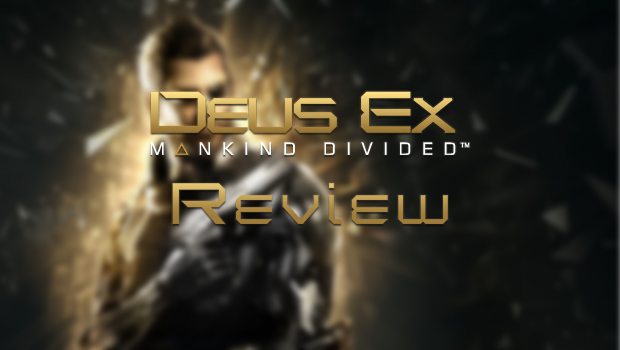 Choices. As human beings we are faced with choices constantly throughout our day. What clothes to wear, what food to eat, what path should we take to work. Some choices however are met with consequences. If you forget to bring a jacket, and it starts to rain later on that day, you may end up getting completely soaked. The Deus Ex franchise has always prided itself on giving its players a choice in everything that they do, and showing them the effects of their choices before the game is over. So, does Deus Ex: Mankind Divided stick true to the franchise’s mantra? Let us take a few moments and find out. 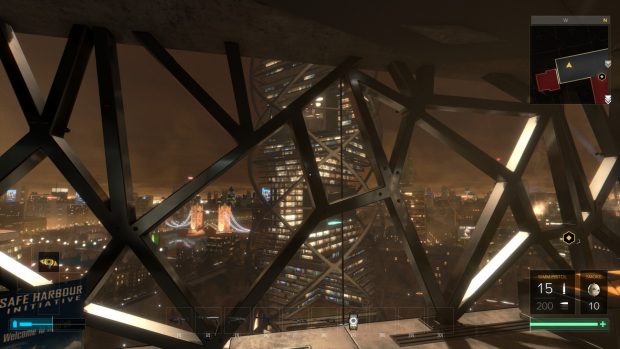 Mankind Divided takes place in the year 2029, two years after “The Incident” of 2011’s Human Revolution. An incident that caused a countless number of augmented individuals to lose their minds and go on murderous rampages, leaving millions dead. Now they are living in a world that has grown to despise and fear their kind. Governments have formed laws to oppress and segregate augmented people into separate ghettos away from society. Adam Jensen has found himself living in Prague, a city known for it’s anti-aug stance, working for counter-terrorist agency Task Force 29. His personal agenda however is to find those who illustrated the events that happened in Human Revolution and to bring them to justice. 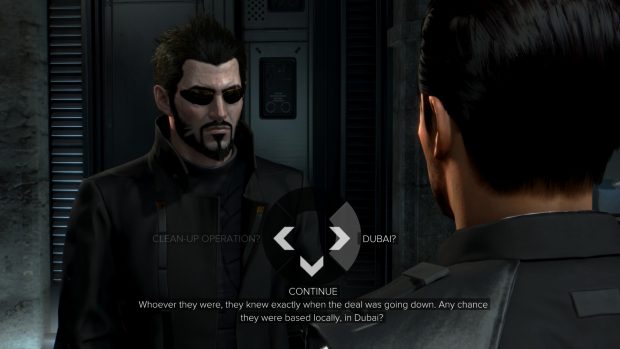 Unfortunately, it feels like there are no real strides made towards uncovering this conspiracy. Most of the time is spent in Prague investigating a terrorist bombing that Jensen was caught in while arriving home at one of the city’s train stations. While we do find out that the Illuminati, the same shadow group responsible for the events of Human Revolution, are ultimately responsible for the events in Prague, there is no real sense of discovery here. In a Deus Ex game, there is typically at least one singular event that flips everything you know upside down, forcing you to question your very existence. Sadly, I never got that feeling from Mankind Divided. Knowing the Illuminati is in control of current events from the start of the game leaves no real revelation to ever be achieved. Fans of the series will see familiar names start popping up, but it feels like the groundwork for their stories rather than bringing them into the light right in any significant way. This is a theme for much of the game’s story, leaving the overall experience feeling like a typical middle-movie in a trilogy, or simply set up for future DLCs. 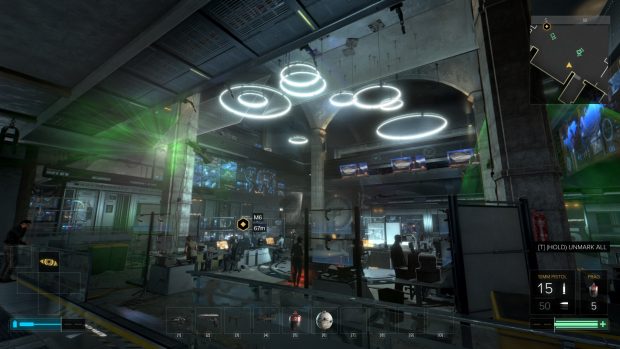 Prague is the one and only major city hub that Mankind Divided takes place in. One of my favorite parts of the Deus Ex franchise was flying around to different countries, exploring cyberpunk cities modeled after the culture of each country. Naturally, I was apprehensive to find out most of my playtime would be spent exploring only one city. Thankfully, with most of the focus being spent on one city, the amount of detail packed into it is incredible, with a wide range of lifestyles put on display depending on the neighborhood you find yourself in. The neighborhood where augmented humans are forced to live oddly enough has an increased police presence and security checkpoints in place, showing players first hand just how anti-aug Prague really is. 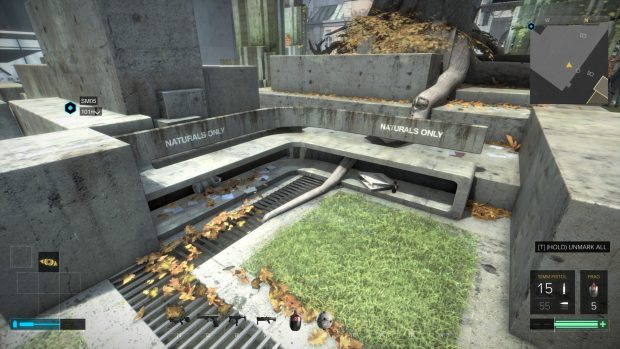 Fortunately every time that you leave Prague and return it gets refaced, giving it a fresh look from before. My favorite time was wandering around at night as the city truly seemed to come to life as you would expect with most cyberpunk settings. Personalities of neighborhoods really started to shine through during these moments around the city. From the sleek modern design around Palisade Bank to the nightclub style around The Red Queen, each area has its own story to tell, and how each area is lit up only scratches the surface of that story.

Whether you’re going in and out of shops stocking up or taking a trip down to the sewers, you won’t find a single loading screen. Every bit of Prague is intertwined in one way or another; the only loading screens encountered will be when leaving Prague on a mission, or if you choose to take one of five subway checkpoints to quick travel around the city. As such, I do urge players against using the subway system. There is so much to do and see that is jam packed inside Prague that you would be doing yourself a disservice by simply fast traveling everywhere. 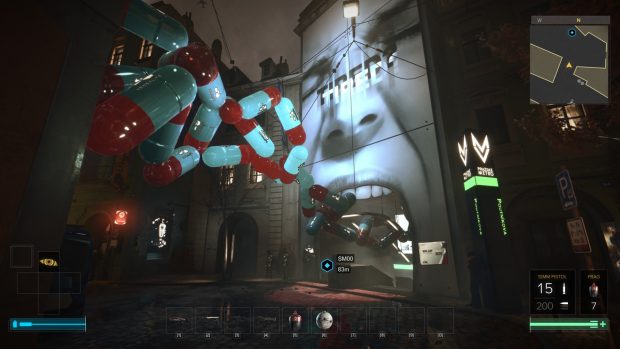 Staying true to the Deus Ex franchise, Mankind Divided is built all around player choice. Do you trust character A over character B? Do you want to be known as an armed gunman who took no prisoners? Or would you rather not to be seen or heard at all? Thankfully in Prague, the world is your oyster.

One choice that I hope everyone makes is to fully explore Prague and pick up as many side quests as possible, as they offer some of the more interesting missions in the game. Interestingly, they are not delivered by conventional methods — at least three or four are picked up either through simply reading a pocket secretary or an email. A lot of these missions take players to different areas that one may not initially think to explore; uncovering a hidden path not thought to be there, or even giving access to a whole new area full of loot to help out with your tasks. 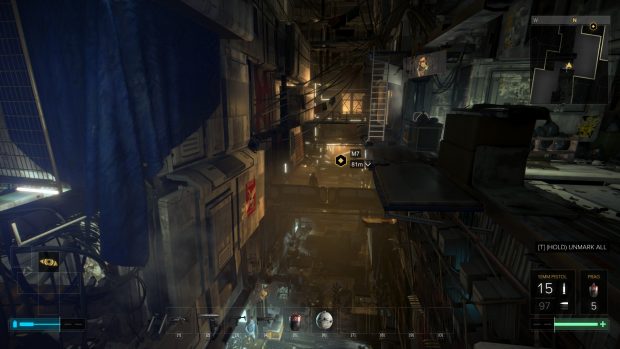 The verticality of Prague really does lend itself to many different paths that players can take throughout their missions. I took a traditional stealth approach when traveling about and was pleasantly surprised at the many paths available for those sneaking around. If a door was locked by a high level security lock, I could move a heavy container to reveal a grate leading into an air duct. Likewise, climbing a carefully placed stack of boxes may allow me access to a building via a balcony instead of the front entrance. There were often times I would even approach from the roof of a neighboring building and find my way into areas from above instead of from the ground level! 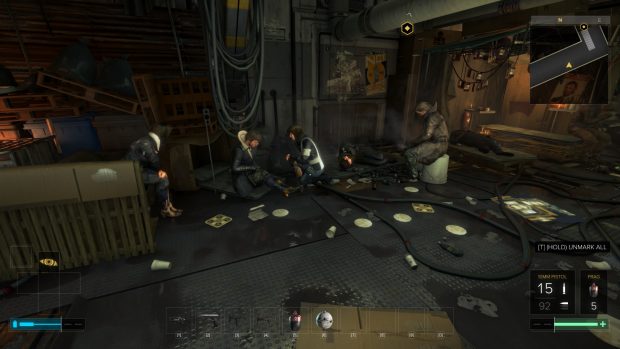 Paths available really depend on what augmentations players choose with their Praxis Points. There are a bunch of different augmentations available and each have their pros and cons to each playstyle. Players earn a Praxis Point each time they level up, or by finding Praxis Kits throughout the city of Prague. It is a different take on an RPG leveling up system because there are no stats pre-required to pick up these skills, and you can choose whichever ones you prefer first.

My personal favorites that will work out in any playstyle were the Vision Feedback, Carrying Capacity, and the Remote Hacking augmentations. Vision Feedback allows you to see the field of view for all objects on your radar. This includes flying drones, soldiers on foot, cameras, and even stationary turrets. Carry Capacity allows you to have maximum inventory space. It is nice to have extra guns in your arsenal even if you are sticking to the shadows. Remote Hacking does exactly as it sounds, letting you disable enemy turrets or drones remotely. 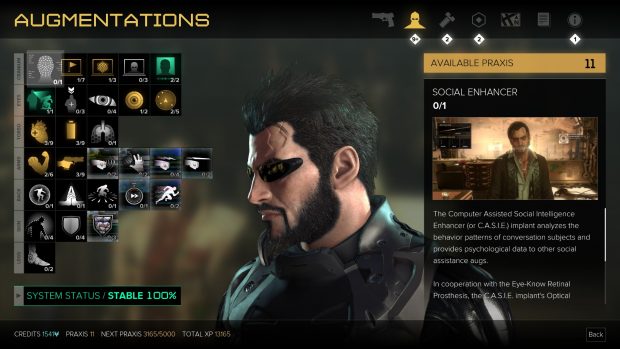 I would be doing a disservice to this community if I didn’t mention the microtransactions included with the game. Microtransactions — a dirty word that has a toxic cloud seemingly hovering around it, no matter what game they are involved in. The microtransactions have been met with a bit of controversy, and justifiably so in Mankind Divided.

What I can safely say is that there is absolutely no reason to purchase anything from these microtransactions. They consist of mostly unnecessary items. There are plenty of Praxis Kits players can find throughout the city of Prague, not to mention being rewarded XP for every little thing you do. If Eidos Montreal would have balanced the game in such a way that it pressured players into wanting to buy more Praxis Kits, I could see the reason for the uproar. However, I wasn’t even aware there even were microtransactions available until after my first six hours of playing the game. You have to give them some credit for not shoving them down players throats like other titles have been known to do, at least. 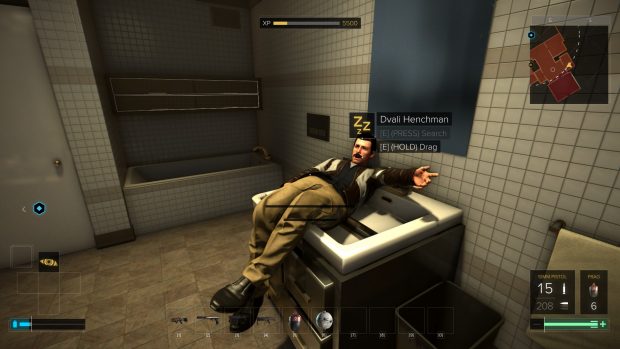 Sadly, how the game performs is a real issue for most players. Constant reports of corrupt save files, crashes to desktop, and overall poor performance are really giving Mankind Divided a terrible reputation out of the gate. I never ran into these issues myself so I can’t comment on how widespread these issues are. That’s not to say they are not there, just be sure to make use of Steam’s refund policy if need be.

The biggest problem I encountered was averaging 35 FPS traveling the streets of Prague. Performance was near flawless when underground or on missions outside of the city, achieving 95 FPS or greater. I can only imagine the poor performance has to do with just how jam packed and intertwined the city is within itself.

To the credit of Eidos Montreal, two patches have already been applied clearing up most of these issues. SLI is still a mess and their work is far from finished. There is a lot more care this game needs before calling it a fundamentally solid PC port.

DirectX 12 has yet to be implemented, so the performance benefits there remain to be seen. 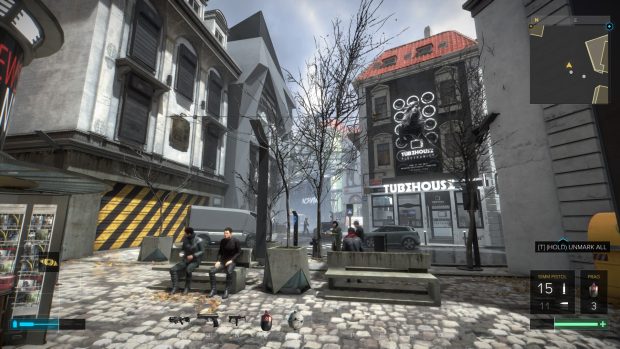 Despite all the controversy and technical issues surrounding Mankind Divided, I still really enjoyed my time with it. The varying styles of gameplay will keep this game fresh for at least a few different playthroughs. My only hope is that Eidos Montreal gets all of their technical issues sorted out before taking on the task of implementing DirectX 12 into the engine. Even though the gameplay itself is great and caters itself to all players no matter their playstyle, the main story sadly left me wanting more. Not because what I was given was great, but because it felt hollow and empty with not much subsistence delivered.

Full, yet empty at the same time.

Summary: The gameplay elements are there and offer up lots of replayability. Just don't expect to have your mind blown away by some insane plot twist.