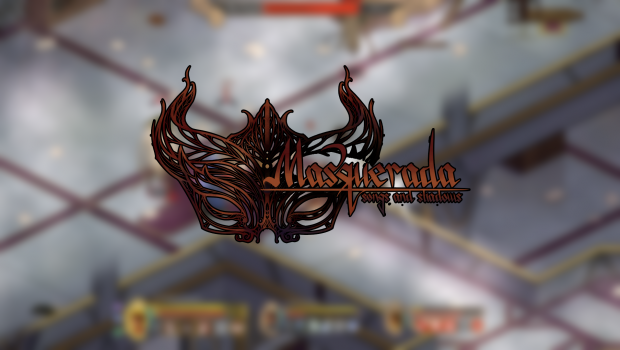 Lies, deceit, backstabbing, and honor; these are all common themes when it comes to RPGs. Because of this, it makes it harder and harder for a story to shine through in the ocean of RPGs available to play. Masquerada: Songs and Shadows has a story that will make you forget about everything in your world and leave you wanting to involve yourself in the events that unfold as you progress. 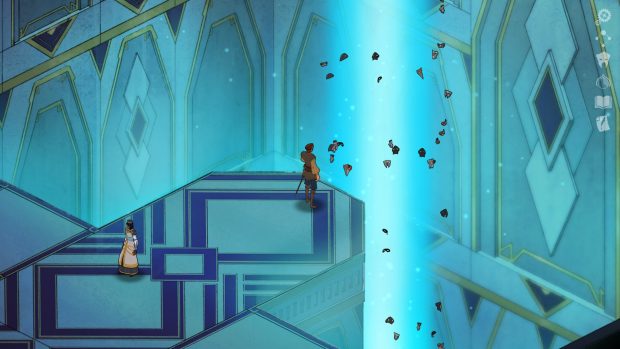 Masquerada follows the story of Cicero Gavar, a once-famed investigator, and his return back to the same city that exiled him and his family five years before. An important diplomat named Razitof has gone missing. After two failed attempts to find him that have ended in the investigator’s death, the city of Ombre found it fit to summon Cicero back to see if he can get the job done. The task, however, isn’t as simple as tracking down the whereabouts of one man. You see, the city of Ombre has found itself in a state of civil war since Cicero was banished from the city… A war that has been fought over mysterious objects called “Mascherines”. 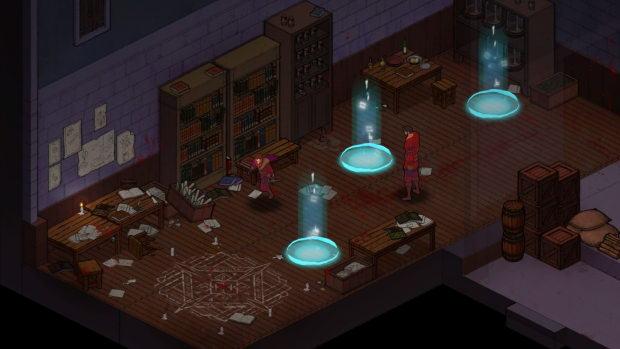 Mascherines, which come in the form of a mask the user wears, are the source of everyone’s magical abilities: helping the users channel one of the four natural elements, whether in combat or everyday activities. However, if someone were to die while wearing one of these Mascherines then that mask is lost forever. Like all things wonderful, however, there is a struggle for control of the Mascherines. The government of Ombre, The Registry, controls who gets these Mascherines inside the city, resulting in the classic situation of the rich get richer and the poor getting nothing. This, as you can imagine, is the root cause for the civil war happening within the city. 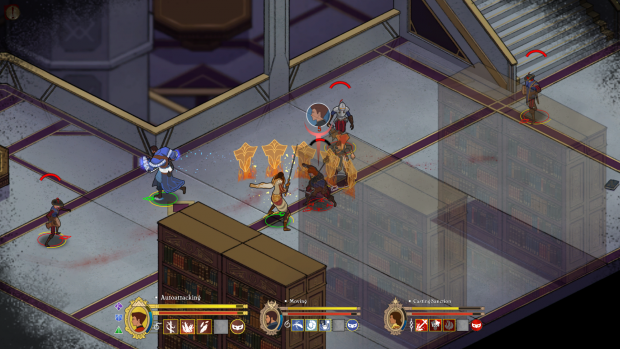 Ombre is a city rich with history, and there are a pages upon pages of scrolls to read through to learn this history. While these pages are wonderfully written and very informative, they do kind of ruin the pacing of the action of the game.  Throughout the game it felt as every other room there were three or four scrolls to collect. The scrolls are written by the hands of Cicero and give players a deeper understanding of his thought process while developing relationships with the other party members. I personally enjoyed spending my time reading all of those that I picked up, however I can see this being a major concern others. 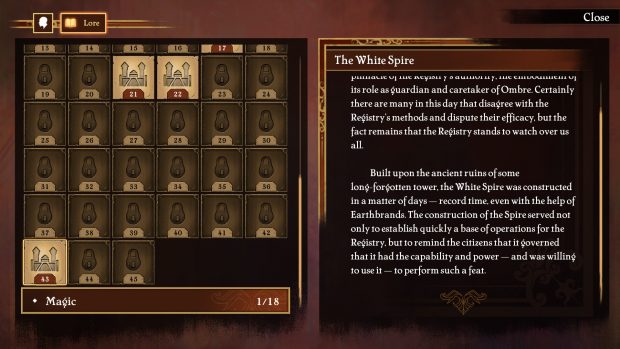 Masquerada plays like an isometric RPG; gathering influences from the likes of Bauldur’s Gate, Divinity, and other classic RPG titles. Parties max out at three characters and players can take control of any three whenever they like or feel the game deems it necessary. The game does allow pausing at will, and it is actually needed on any difficulty higher than “Story Mode”. Positioning and comboing abilities off of one another are key components to one’s survival. 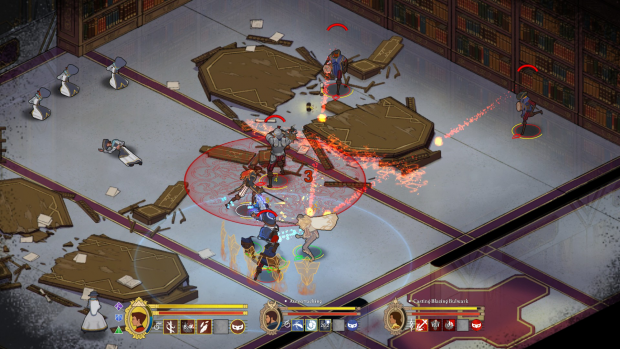 Everyone has a magical shield that is powered by “focus,” which is indicated by a yellow bar on the screen. As long as this bar is filled, that character will not take damage if attacked head on. Positioning is key while in combat: attacks from the side will split the damage inflicted between the shield and health bar and attacks from the back do full damage to the health bar.

Players can take advantage of synergies between each character’s magic spells by way of an elemental tag system. By casting particular elements in succession, players can combine element-based status effects for crowd control, such as a blinding smog or a debilitating cloud of steam. If an earth spell inflicts an enemy with an earth elemental tag, it can then be triggered by a water spell to ensnare the enemy in show-stopping mud. 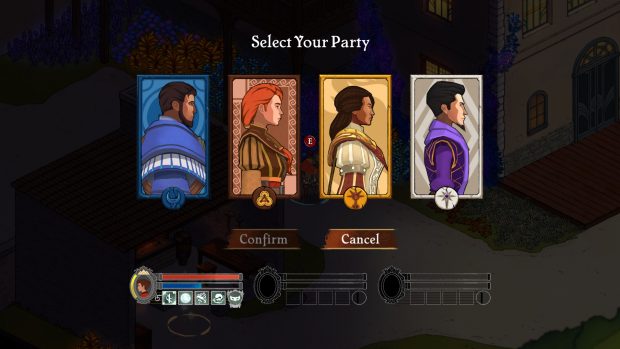 For better or for worse, Masquerada itself is fairly linear. There are no branching story arcs, very little exploration, and once you move on from an area you cannot go back. This works for Masquerada however. The real focus for this game is to tell a compelling story and it achieves this and more.

The only real choice players have power over is assigning skill points to the different abilities for each class. A maximum of four active abilities and one passive can be assigned, each move comboing off of the element tags of the same or even different elements as stated above. The system allows you to refund your points for free and try new builds and there is even a training area where you do to test out your new abilities. The only thing you can’t change about your build is your element; once that is set, it’s there for the whole game. 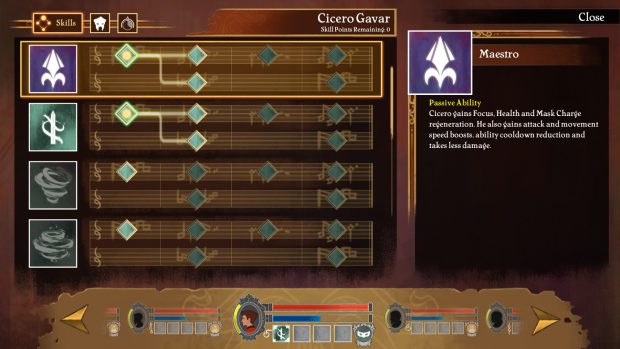 Now every great story-based RPG is not complete until it is backed by a compelling soundtrack. Josh Whelchel has composed a masterpiece that truly captures the mood of each and every scene in the game. This soundtrack, paired with some of the most powerful voice acting I have heard delivered, had chills constantly moving down my spine. I could feel the pain, the anguish, the joy the characters felt as the story progressed. These moments are what truly leave an impact when telling a story through a game, and Masquerada has nailed it down perfectly. 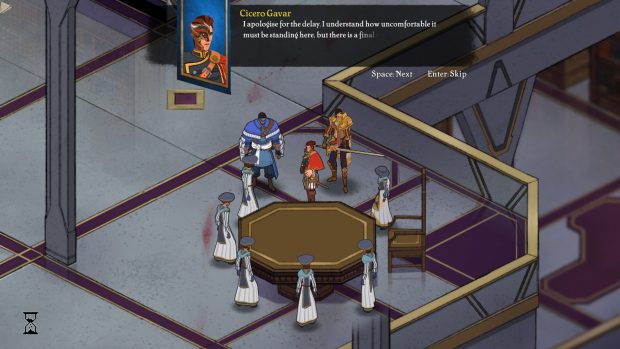 Visually, Masquerada is one of the most beautiful games I have had the pleasure to set eyes on. It doesn’t break any new ground as far graphics go, but the hand drawn art style fits fantastically with the game. While a lot of the same areas are reused multiple times, I never got bored of them or felt like they overstayed their welcome. I found myself finding new and charming things each time an area was revisited, truly bringing to life and making me appreciate the simplistic artwork even more. 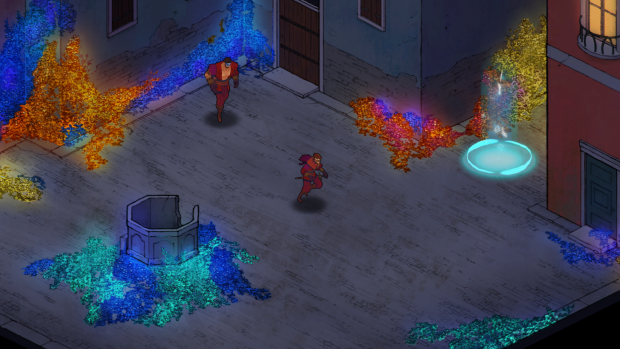 Masquerada: Songs and Shadows is a game that can shine with the brightest of RPGs. Although it is fairly linear, where most RPGs are not, this does not necessarily hurt the game. Accompanied by a powerful set of voice actors and a soundtrack that has a songs to fit any mood, Masquerada is a game that any fan of RPGs should be playing.

Summary: A powerful story accompanied by compelling voice acting and a captivating soundtrack. Pacing may be an issue for some, but if you're a "lore whore" you shouldn't be bothered.

One Response to Review – Masquerada: Songs and Shadows