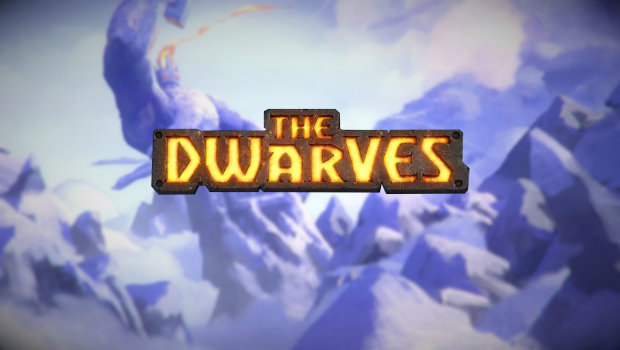 Dwarves, best known for being both stubborn and prideful. Everybody knows about them, everybody loves them. However, they have always been stuck as the sidekick, or even an afterthought, in fantasy party makeups. Always the bridesmaid, never the bride, as they say. Well, finally, their time has come! The Dwarves is a tactical fantasy RPG where dwarves are the star of the journey. 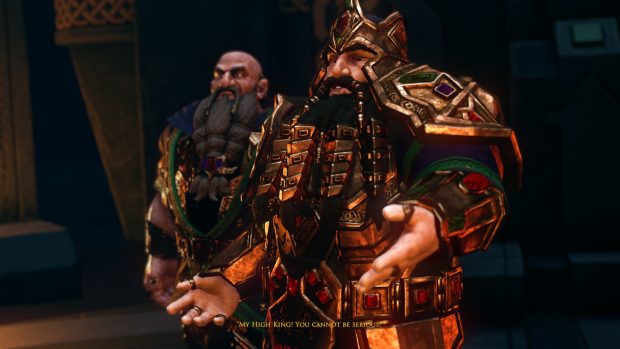 The Dwarves follows the adventure of Tungdil, a dwarf that was taken in by human magi after they found him alone as a child. He has lived his whole life around humans and has rarely traveled outside his home where he works as a blacksmith for the magus Lot-Iolnan. Tungdil’s adventure starts when Lot-Iolnan asks him to deliver a satchel to an old friend over 300 miles away. Not far into his journey, however, Tungdil finds out that orcs are on the move and the quest will no longer be a safe and leisurely stroll through the country of Goldengrad. His journey quickly changes from a simple delivery job, to uniting the different factions that inhabit Goldengrad. 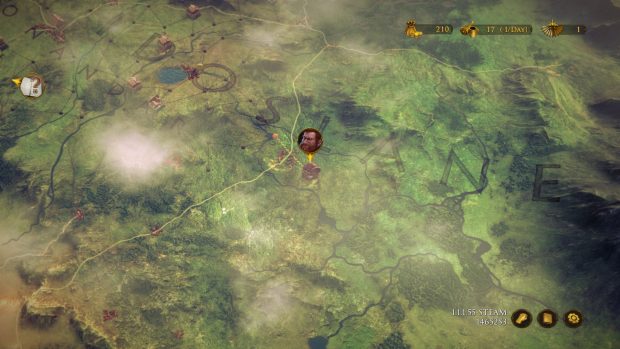 With a full cast of voice actors, The Dwarves does a great job of delivering the emotions felt by each of the cast members. With characters that don’t always get along, and an adventure that seems almost impossible, tensions are sure to rise and these struggles are captured perfectly. My biggest gripe would have to be with the narrator throughout the game. While at times these narrated scenes are fantastic and fit moments very well, a sort of disinterest, at times, by the narrator overshadows the great event that just happened. 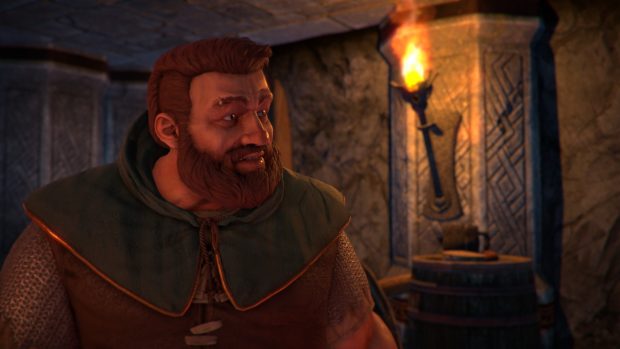 The gameplay is a mixed bag of sorts. You have the “choose your own adventure” portions of the game that pop up while traveling around the map. Choices made during these sections have a chance to impact outcomes of other side quests later on the game, but didn’t really seem to effect how the main story played out at all. However, I didn’t mind this being the case, because at least the choices I did make still had an impact on different aspects of the game. Not confronting a group of mercenaries in one town may cause them to pop up in the next town stirring up trouble for you and your friends. Oh, I also have to mention, if you make certain wrong choices, you can actually get your party killed without ever putting up a fight. 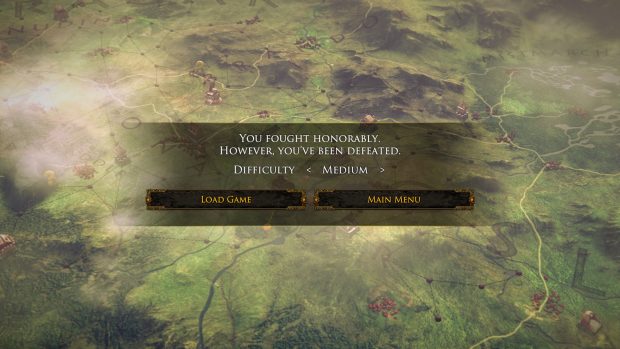 When players aren’t wrapped up in the “choose your own adventure” sections of the game, they are dropped into intense, tactical real time battles. Choosing from 4 of the 15 different playable characters throughout the game players must fight against massive hordes of orcs, undead, and dark mages. I’m not talking 4 vs 10, I’m talking more like 4 vs 50+ enemies. Using the unique abilities of each character in combination with the “physical complexity” engine are what truly make these battles feel epic. Smacking over a crowd of orcs followed by a leap on one to behead it, gave a real feeling of satisfaction. 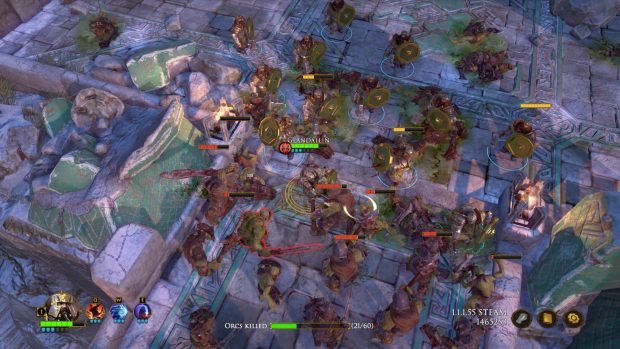 Anytime during the battles, and I highly recommend doing this, players can pause the game and plan out what moves they want each of the four characters to do along with which direction they want it performed. The reason why I recommend doing so is because these battles are tough! Even on the lowest difficulty there is friendly fire, and if any of your allies are caught in the attack they will feel the full effects of it as well. I can not even begin to explain how many times I had to restart, because I accidentally cleaved someone off a cliff, or stunned three quarters of my team with a lightning bolt attack. I just wish there were more battle sections, because these parts of the game were a blast to play, but I guess that is the sign of a good game, isn’t it. 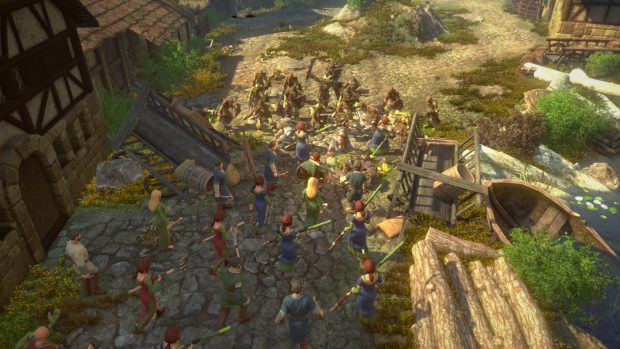 As with most RPGs, there is a leveling up system which lets you choose what skills you want to acquire. There are a maximum of 10 levels to earn. The skills acquired vary between the different characters, so it’s good to choose skills that will compliment the others in your group that you will be using. Choices, however, are not permanent, anytime you get a chance to choose a new skill you can reset all your choices and respec from there without any sort of cost or punishment. 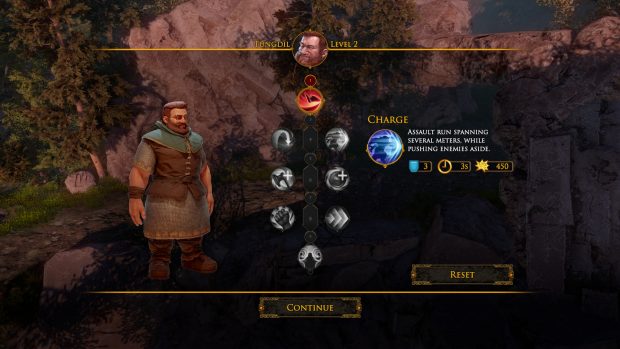 There isn’t much in terms of PC quality options to set, in fact, it is just a series of preset options. There are roughly six different visual presets ranging from fantastic quality down to fastest quality. While the difference between fantastic and fastest are vast when playing the game I would still like to see the ability to tweak more options for those players on low end PCs. Especially since there are battles where massive amounts of orcs being rendered on screen. 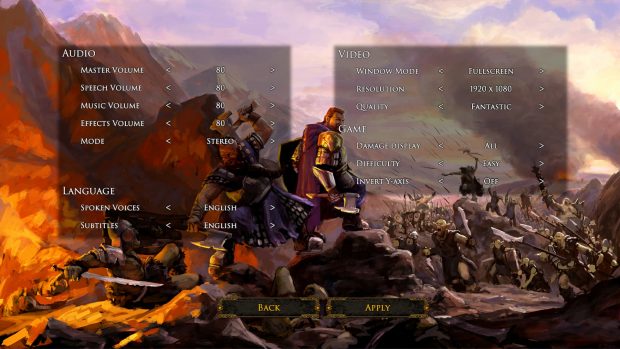 Now that dwarves have finally gotten a chance to live in the spotlight, I can’t help but want more. The Dwarves did a great job of capturing the stubborn and prideful nature of dwarves. They have always been my favorite race in fantasy settings, and I hope that this game is the first step in to busting the door wide open for more games to feature dwarves as the main cast. The Dwarves releases December 1st, 2016 on Linux, Mac OSX, PS4, Windows, and Xbox One.

Rough Around the Edges

Summary: While The Dwarves is thoroughly enjoyable, it did have it's rough patches while playing. That being said it does offer a unique experience having dwarves as the star of the show and I found that quite refreshing.