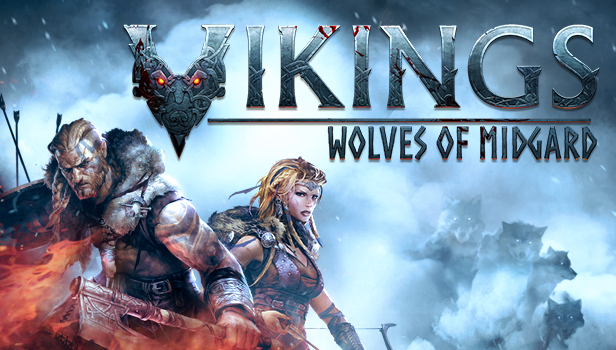 At first glance Vikings: Wolves of Midgard seems like a Diablo III clone set in Norse Mythology, and in many ways, you would be right. It is an Action RPG, and the overall design and ambiance is in the same vein as Diablo III. You could also argue that Vikings is the prettier of the two. 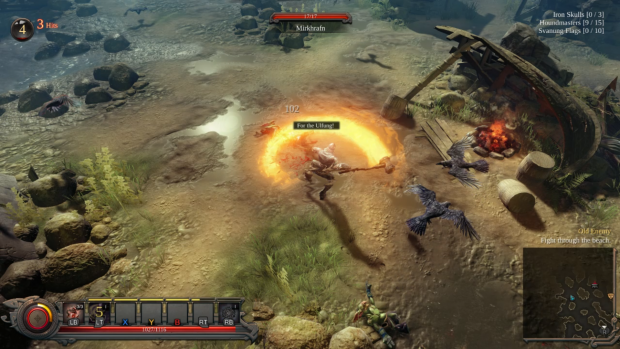 Even the swamp is gorgeous.

However, after playing Vikings, the similarities, for me, end there. The play style and feel of Vikings is completely different from that of Diablo III.

You play a Warrior (or a shield-maiden) who’s village was decimated by an attack and you are there to rebuild and exact revenge on the monsters responsible. In the early missions your village is your hub and you are finding and saving folks to help populate the town. These NPCs also provide benefits for you, whether it be for crafting or to travel to new missions. When you start, you choose your Deity, which is Vikings’ answer for classes. You choose Thor for 2 handed weapons, Loki for Dual Wield, Odin for Staves, etc, and each have their own unique set of skills to be used for working your way through the instances. 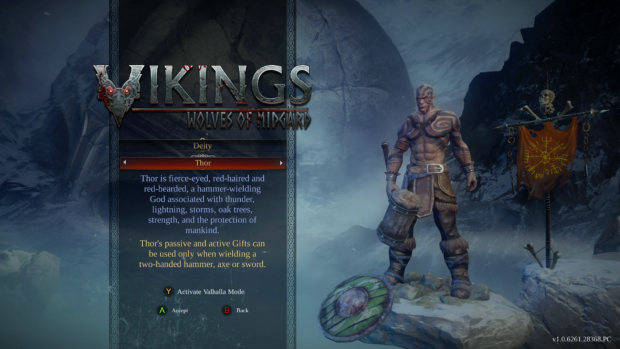 If you aren’t picking Thor,  I don’t want to know you.

The fights in Vikings are strategic and are more than just spamming the attack buttons. There are cooldowns and a stamina bar that you need to manage in order to win the battles.   Many of the mobs have powerful (but slow) attacks that you need to dodge, and the boss fights all have their own unique mechanics. As you use abilities your rage bar begins to fill, once it is full you are able to enter “Valhalla Mode” where the screen changes color, the action slows down, and you become a force to be reckoned with.

The dodging mechanics are intuitive and smooth. You just need to move the right joystick in the direction you would like to dodge. This keeps the combat fluid and you don’t find yourself panicking looking for the dodge button.

One of the unique features in Vikings is the exposure system that keeps players on their toes, and forces them to be aware of more than just the mobs. For example, when you are in the winter tundra, players need to worry about their warmth, which continually depletes when you move away from campfires. Campfires are placed all over the map and you need to plan next moves to ensure you are not stranding yourself. This system also prevents face rolling through instances, and promotes exploration. Additionally these mechanics can provide some foreshadowing for boss fights. If you need to stay near fires to keep warm, you can predict there will be a similar mechanic for the boss fight.

The loot system in Vikings, for me, leaves a lot to be desired. It is very similar to Diablo III in mechanics where loot flies out of the mob as it dies, however the overall system seems to be focused on crafting versus big shiny drops. If I am going to be playing an RPG game like this, personally, I want those blue and purple drops to feed my loot addicting. I certainly do not want to have to work for it! This issue did seem to get better as you continued to progress through the game, but the bad taste of crafting still lingered.  I know crafting can be enjoyable for some,  but there is nothing that frustrates me more than trying to craft something and being short on resources. 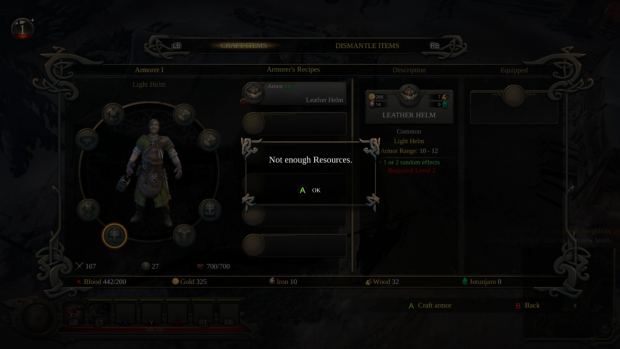 Vikings as a whole is an enjoyable game to play through, the mechanics are fresh and the gameplay is fun. I did not  think the story was very compelling and found myself skipping dialogue at times just to keep things moving.  I do not think it will have the lasting power of other “hack and slash” style games, and will be great for one play-through, but I cannot see it keeping players engaged for several months via multiple play-throughs, grinding for gear, and/or unlocking achievements. For this reason, I feel like they missed the mark considering the price point.

Vikings: Wolves of Midgard is available now on Steam.

Summary: Vikings Wolves of Midgard is great for a one off play through with fresh mechanics on the Action RPG genre. Just lacking the staying power after that initial play through. 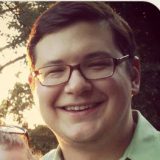 Writer & Editor. I have a passion for all things video game. I love to focus on the origins and inspirations for games, new and old. I have an appreciation for good whiskey.