Batman games are a touchy subject.  That is until 2009 when Rocksteady Studios released the most widely accepted rendition of a Batman video game to date. Batman: Arkham Asylum brought great combat and story to fans across the world. Fast forward to 2011 and now we get our hands on Batman: Arkham City, a sequel which almost entirely dismisses issues that many had with its predecessor. 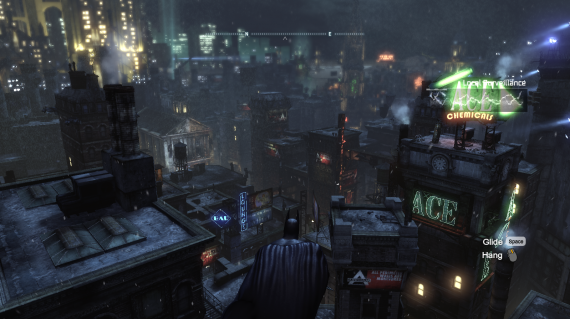 Arkham City begins abruptley, with vivid imagery of a the new, urban prison known as, you guessed it, Arkham City. The penitentiary is being controlled and operated by Dr. Hugo Strange, the same man that has become aware of Bruce Wayne’s alternate identity of Batman. After a short tutorial and cinematic explaining what is happening all around you, players will find themselves dead in the middle of a large map containing smaller gang-like territories. You quickly become aware of these gangs, as they are being commanded by the usual crew and more, such as Two-Face, The Penguin, Poison Ivy, and the notorious Joker. 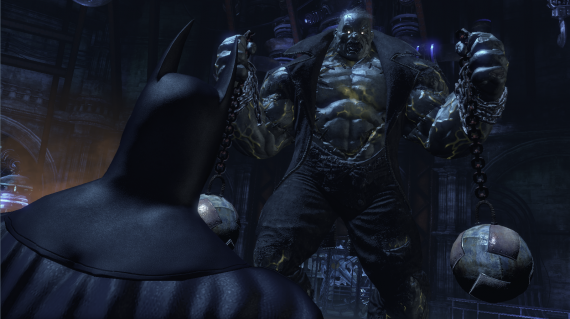 Each of these characters are interesting enough, but the real story begins with the Joker. Without spoiling anything, Batman and the Joker become somewhat reliant on each other, albeit not willingly on the part of Bruce Wayne. With this twist, the story of Arkham City becomes a tornado of pressure. The plot of Arkham City has some really great points, but is occasionally interrupted by side missions and the seemingly meaningless Catwoman segments. Although Catwoman finds more than one way to be aesthetically pleasing, her part in the game doesn’t provide much besides a few good lines of dialogue. As an overall story on the other hand, Batman delivers in the end, with a blockbuster finish that will leave your jaw somewhere between your feet.

Between the mobs of gangs and obscure villains, you can bet your butt that you will be fighting mobs and mobs of bad guys. This is truly where the game shines. Left mouse attacks, and right mouse counter-attacks. Simple enough? Add in layers of diverse opponents with stun sticks, riot shields, and sharp knives and you’re only a small slice into the brawling opportunities Arkham City provides. The unlock and level up system gives you the tools to make the combat as deep and interactive as you want it to be. Growing a combo streak will reward you with special takedowns, which only entice the player to cut further and further into the combat system. Hotkeys also allow Batman to use his gadgets on the fly, allowing for interesting combos with explosive gels, Batclaw pulls, and a slew of other wacky unlocks in your Bat-belt. Of course you can finish the game doing the bare minimum, but the satisfaction of performing a ballet of violence in beautiful animations just isn’t something you should deny yourself. 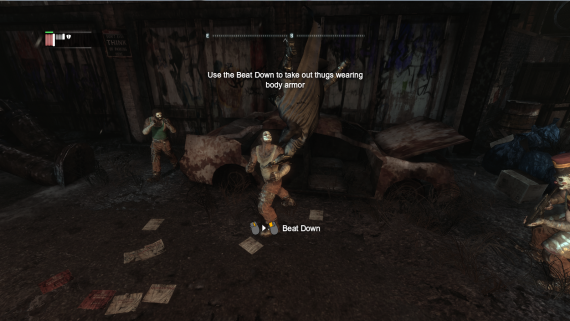 The only way a powerful punch from Batman can be made better is with sound design that lets you really hear the contact of fist to bone and flesh. This is another place where Arkham City falls under the “fantastic” category. Between the general game sound, voice acting, and original score, there is no way it could be considered anything but. The voice acting provides convincing dialogue and emotion, even down to the loyal butler Alfred. Although the majority of the cast delivers, without a doubt Mark Hamill’s performance as the Joker steals the show. Along side the great vocal works is the original score, which manages to find a balance between original content and a similar sound remeniscent of Hans Zimmer. The music manages to kick in when you want it most and only amplifies the experience. 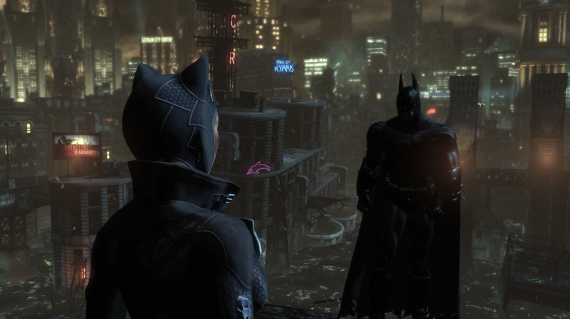 Although Batman: Arkham City carries itself incredibly well, there are definitely some issues with the game. The delay for the PC side of things almost seems like a waste, seeing as DX11 features are rather unstable. At the moment it is recommended to use DX9, but there isn’t too much to complain about, considering the game is gorgeous all the way down to the tiny snowflakes that will land on Batman’s cape. It also uses Games for Windows Live, which has also created rubmlings in the PC community. As far as the game itself, I felt that the world map initially felt overwhelming, but in a matter of minutes realized that Arkham City is quite small in comparison to other open-world maps. Another small negative I found is that the main plot circulates around a few key set pieces. Even though Arkham City has it’s own problems, almost all of them are dismissable and don’t often detract from the overall game.

Batman manages to live up to the hype, and show Batman fans that there really can be a good game based around the Dark Knight. Stepping somewhere between Christopher Nolan’s trilogy and Batman: The Animated Series, it finds common ground for anyone who enjoys the classic crime-fighter. Containing amazing fight mechanics and an enthralling story, I would consider this to be Game of the Year worthy. With that being said, I would gladly give Batman: Arkham City a solid 9 Michelle Pfeiffer Catwomen out of 10.