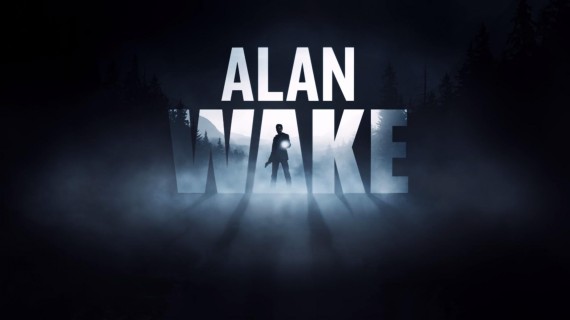 Alan Wake is a truly interesting specimen. Originally slated to launch on both PC and Xbox 360 simultaneously and entrenched in a seemingly endless development cycle, the PC version was delayed and then cancelled. Many patiently waited to see if there was any chance of revival, but months went by without any news for PC gamers. The time has finally come: Alan Wake for PC is here, and it was well worth the wait.

Alan Wake is a thriller at its heart, lifting inspiration from author Stephen King and taking various visual cues from a wide variety of horror movies. The story opens with bestselling thriller author Alan Wake taking a needed vacation to Bright Falls, Washington. In an attempt to clear a prolonged period of writers block, Wake and his wife Alice plan to escape to a rented lake house, and just as they’re settling in, Alice disappears. Alan initially believes it to be a standard kidnapping, but it soon becomes clear they are darker powers at work.

Alan Wake’s story is a significant change of pace from what is commonly done in video games. It unfolds slowly as you make your way through the game and in one way or another most players will catch on to what’s happening behind the scenes. The problem is this doesn’t seem to be done intentionally. As the plot progresses, Alan becomes more aware of what’s going on through lost manuscript pages and in game events. The issue is it isn’t particularly difficult to piece together what’s actually happening on your own. At some points you may find yourself shouting “Figure it out already!” at your monitor, when you’ve solved the mystery and Alan still seems dumbfounded. 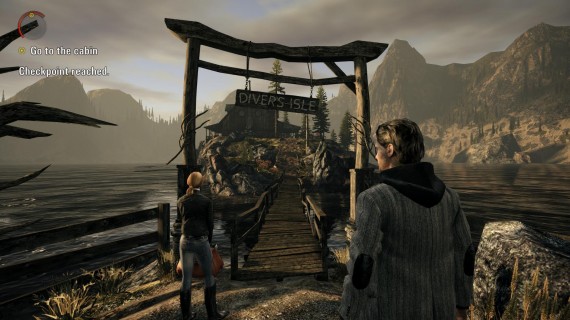 Between the major plot points of Alan Wake, you’ll find yourself scavenging and hoarding both ammunition and batteries. Yes, batteries. The unique gameplay element of Alan Wake is its interesting use of light and dark. You find yourself pitted against enemies shrouded in darkness, and the only way to make them vulnerable is to shine some light on the situation, literally. Finding a balance between flashlight use and gunplay, while also dodging hatchets swung at you is a breath of fresh air for the tried and true third-person shooter genre. This addition to the combat system makes for some interesting and dramatic firefights. Even though your foes only wield melee weapons, they have no problem bull rushing you if you can’t keep them at bay with your flashlight. In large groups combat can get hectic, but very satisfying. 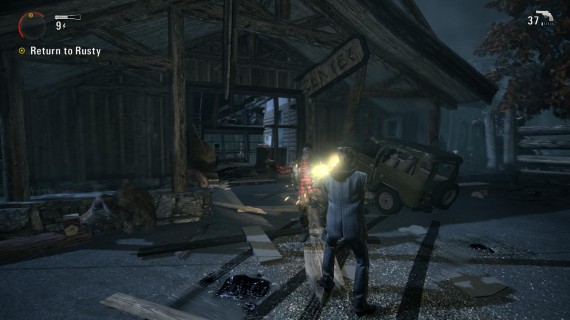 Being a console game originally, it’s understandable to be concerned about PC performance and control options. Thankfully, this is not your standard slap-dash console port. All the traditional PC options are available for control and graphical adjustment. Options such as anti-aliasing, volumetric lighting, and anisotropic filtering are all present, along with a much appreciated field of view slider. The game runs well and is a joy to look at, particularly with effects and textures at their highest settings. The majestic vistas and dense woodlands of Bright Falls are all well represented with the PC version’s graphics engine. 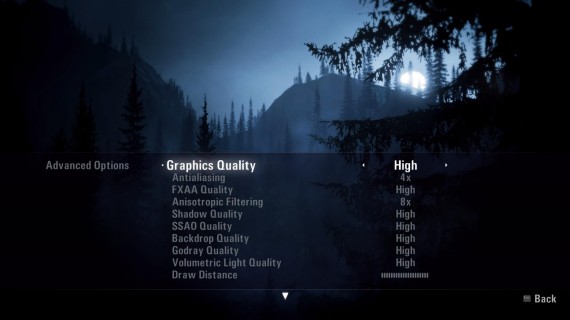 When it comes to Alan Wake’s controls, reception is a mixed bag. Anyone familiar with traditional third-person controls on a keyboard and mouse won’t be in for much of a surprise. The aiming system can be seen as both a redeeming and damning point based on your preference. If you’re used to Call of Duty style quick headshots, you’re going to be in for a letdown. Your only real reticle is your flashlight and is your main means of focusing on an enemy. The lack of precision targeting will be seen as a negative by some, but could help anyone who finds typical third-person aiming schemes unbearable. Custom key binding is present and a welcome option for those who don’t use the standard WASD layout, although I found almost all the default mappings to be acceptable.

The attention to PC options that both Remedy Entertainment and Nitro Games have put into Alan Wake keeps me optimistic about PC gaming. It’s refreshing to see developers taking into account what PC players want and not simply rehashing their console game for PC players. PC gamers are a very picky sect of gaming; we want to like your game, and we want to feel like you developed it with our platform in mind. We don’t want the sloppy seconds of your console offerings, and we embrace the games custom tailored to our platform of choice. Remedy Entertainment and Nitro Games should be recognized for the fantastic job they did bringing this game to the PC market. 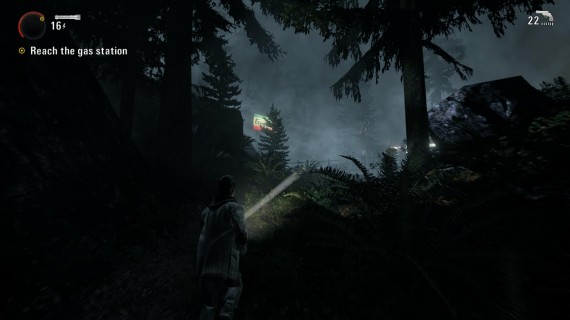 In the end, Alan Wake is a fantastic title. It offers a fresh take on the often stale third-person market and will offer hours of tense gameplay. The story can be thin at times, but the good certainly outweighs the bad. The PC launch price ($29.99) makes the deal that much sweeter, considering the game ships with all the existing DLC included. If you’re looking to sink your teeth into a compelling single player experience with a unique atmosphere, you should already have Alan Wake purchased. I give Alan Wake 8 “The Shining” Jack Nicholsons out of 10.