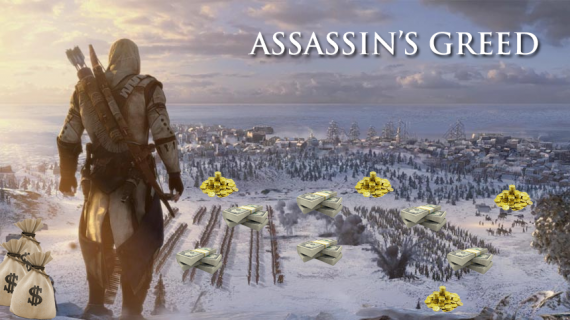 Let me start this article by saying that I think Assassin’s Creed III looks phenomenal. I just started playing the original Assassin’s Creed to catch up on the backstory because that is how excited the marketing and overall buzz from fans have made me for this game. On top of that, Ubisoft had finally earned some goodwill with me, despite years of inexplicable idiocy, when they decided to remove the misguided DRM from their games and, at long last, gave PC players the freedom to play whenever and wherever they want.

Unfortunately, Ubisoft is trying their damnedest to go right back into my doghouse. We already know the PC version of the game will release nearly three weeks after the console version (November 20 in the U.S.), but that isn’t the worst part. No, what’s soured me is finding out that the multiplayer portion of the game will be financially supplemented with microtransactions.

There is just something that irks me about paying 60 dollars for a title and then paying extra on top of that for a faster weapon unlock or cosmetic change. Now, I’m okay with this sort of thing in free-to-play games because that’s their entire business model. But for a game like Assassin’s Creed, where I already have to pay a premium price up front, this kind of thing just comes off as a greedy attempt to pad profits on what will undoubtedly already end up being a successful game. We also know that no triple-A title goes without DLC these days, so you’ll have even more opportunities to pay over and above that 60 dollar price tag.

According to Ubisoft, there will be two types of currency:

“The Erudito Credits are a new way of unlocking content in Assassin’s Creed 3′s Multiplayer. People who have little time can use Erudito Credits as a shortcut to unlock game items from level 1 to 50 (excluding Prestige levels and relics rewards). This is not mandatory, all items sold in Erudito Credits are also available in Abstergo Credits and can be unlocked through normal progression like previous years.”

I just don’t get it. Ubisoft has already talked about going free-to-play because of piracy, but they seem to be missing why microtransactions work in free-to-play–because the base game is free. If the game is a free download, I’m happy to grind away to get the coolest gear or use my hard-earned cash as a shortcut. But if your game is 60 dollars, I’ve already paid my entrance fee. For that money, I expect a full-featured multiplayer experience where you don’t see the kind of have/have-not disparities that are commonplace between the free and paid customer segments in free-to-play games.