Guild Wars 2 to Have Epic “World vs. World” PvP

ArenaNet has been releasing plenty of information about the PvE (player vs. environment) aspects of the upcoming Guild Wars 2, and it seems about time that we got some info about the PvP (player vs. player) side of things. According to the official Guild Wars 2 blog, the game will feature “huge, open-field, server-versus-server warfare the likes of which you’ve never seen” that has been coined WvW (world vs. world). Different servers will duke it out in a three-way battle with teams of one hundred players each. This new mode will take place in the Mists, an area specific to PvP battles.

WvW will be centralized around objectives. A lot of them. Teamwork is an obvious necessity, unless you plan on having hordes of allies smashing rocks into their own heads. Taking hold of a keep or tower and claiming it for your guild is just one of the basic objectives that will give your team some ground to work with. Defending and attacking are just as important, and controlling the different areas will be crucial. All objectives won will give your team points, which are in turn used to give your team/server a new ranking. Servers will get matched up against one another based on their rankings, and battles will be happening nearly all the time. 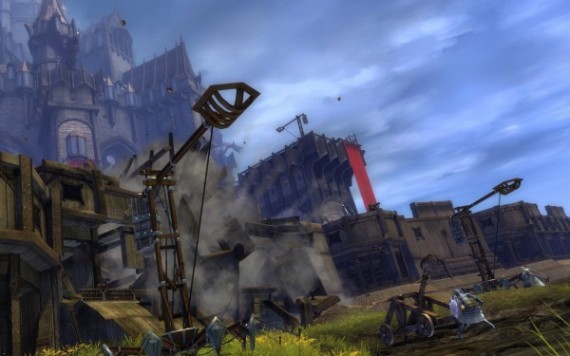 Resources called “supply” will be gathered and earned by teammates to build siege weapons, upgrades, or repairs for your current defenses. Some siege weapons include trebuchets, catapults, and even Asuran siege golems. Whether you use them for defense or offense, these weapons will definitely add another layer of intricacy to the gameplay. Other factors, such as taking over resource camps or helping NPCs to recruit them as allies, will all effect the outcome of a battle in the Mists.

On paper, this seems like a dream come true for MMO players. Constant fighting and objective play on a large scale with micro and macro management, and even some tower defense characteristics are thrown into the mix. The only worrying aspect is that, given the scale and complexity, it may be difficult for anyone to simply jump into the game and be useful. Battles with such a large amount of people often ride the line between organization and complete chaos. Hopefully, ArenaNet focuses on giving WvW combat a good balance of skill and tactics, rather than just devolving into a numbers game where each team is bombarding structures with dozens of people at a time. WvW is certainly ambitious, but if it delivers on its promises, I can see myself and others sinking many hours of our lives into it.

4 Responses to Guild Wars 2 to Have Epic “World vs. World” PvP