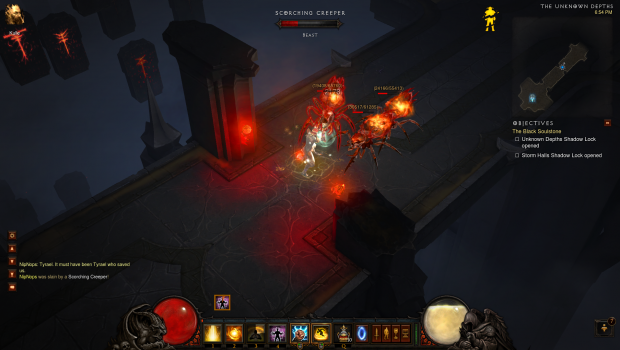 Diablo III nearly won our award for Biggest Letdown game of 2012, being narrowly beaten by Tribes: Ascend.  For all the amazing combat, sound and graphical achievements of the game, things like the Auction House and somewhat meaningless grind diminished everything else about the game.  It had simply lost the spirit of Diablo. It lacked that addicting feeling that Diablo II had of ‘one more run’.

Now it appears Blizzard is trying to fix that.  At GDC 2013 this week, Jay Wilson (former team lead of Diablo III), said that the auction house “really hurt the game.”  According to PCGamer he also said that Blizzard  would “turn off [the auction houses] if we could.”  Well, that’s a strong and clear statement.

The PCGamer article finishes up with the news we’ve been waiting for from all of these months of talk. Wilson acknowledged that a solution is being worked on to the AH problem that doesn’t involve removing the feature entirely. My own speculation hopes this could be in the form of a separate ladder.  Some sort of classic or pure mode with no auction house at all.  Blizzard has addressed loot issues incrementally through patches and now with monster power combined with inferno mode and a lack of auction house, you could probably start playing the game like Diablo II again. This would make for an experience once again revolving around farming and bartering with other players through trade for items.

Hopefully more news comes out soon about how they plan to implement these changes. If this is mode is implemented, I’ll definitely be playing again. Maybe we’ll even see eight player support for the PC version someday. I can dream, can’t I?