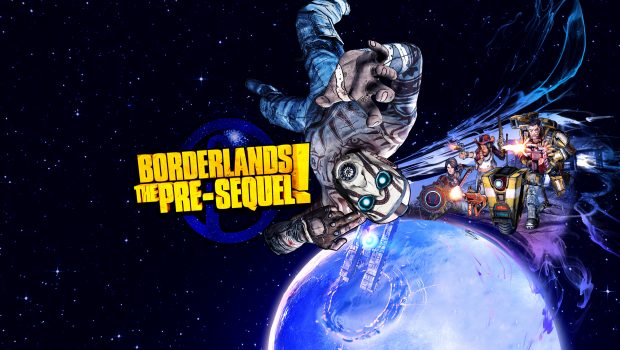 Published on November 20th, 2014 | by MrMattyMouse

Borderlands: The Pre-Sequel is a Borderlands game. Well that was an easy review!

Ok, so you want a little more? Borderlands: The Pre-Sequel is a very average Borderlands game. It still does all the things a Borderlands game should do.  There are still 7 quadrillion guns, it’s still fun running around with 4 friends and doing zany missions, but in the end this game should have been a Borderlands 2 expansion.  This should not have cost the same as a full price game, as it simply isn’t worth it. 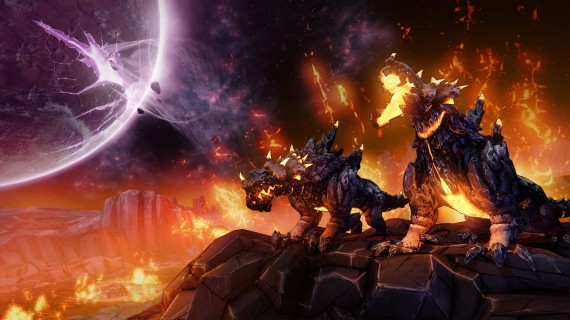 In case you’re unfamiliar with what a Borderlands game is, here is the rundown. You play one of 4 unique and different classes, each with their own talent trees and special abilities. Your choices are between Wilhelm the Enforcer, Athena the Gladiator, Nisha the Lawbringer and Claptrap (a really stupid, annoying robot). You then take your character and fight through different areas with different kinds of bad guys for you to shoot at with an enormous array of guns. Everything from rocket launchers, assault rifles, smgs, pistols, sniper rifles and even the new laser guns can be used to inflict horrible injuries on all that stands between you and whatever quest objective you’ve been given by a random NPC (or bounty board). You use these quests to find new loot in the form of new guns, shields, class specific equips, skins, and ammo. You use the experience you get from killing dudes, looting stuff and doing quests to level up your character, unlocking new abilities in one of the 3 talent trees that each character has.

Generally all of this stuff is pretty fun. It’s nice to run around with a bunch of friends, or even go solo and blow away colourful enemies with a ridiculous array of weapons. This game is situated between the last 2 games, and focuses on the character of Handsome Jack, the main villain of Borderlands 2. Throughout the course of the Pre-Sequel you get to see what happened to turn him into the psycho you fight in Borderlands 2. Jack’s transformation sees him go from a weak, scared man to an egotistical, bloodthirsty titan out for nothing more than his own gain. Watching the way his character slowly progresses over the course of the story is easily the game’s biggest highlight, and is the most well written and fleshed out part of the entire experience. 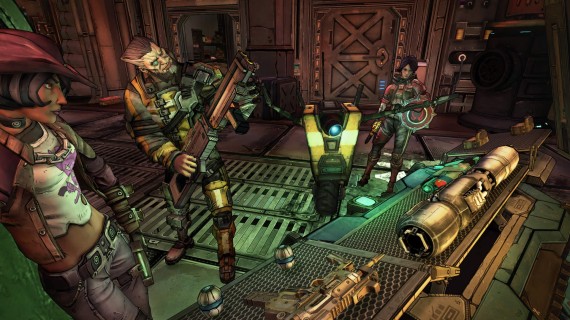 If you have played a Borderlands game before, then you already know what you’re getting. The game is unashamedly similar to Borderlands 2. The UI and menu screens are ripped straight from Borderlands 2.  Apart from the addition of Laser gun, which fires a beam of varying types of energy at your enemies, the only new addition is that of an oxygen system. Seeing as the game takes places primarily on the moon Elpis, you need to preserve your oxygen levels while outside or else you’ll start to slowly die. The Oxygen systems, called OzKits (because it was developed by Australians, get it?!) are pieces of equipment that you attach to your character that change around a small number of stats. The downside is that the oxygen system breaks up the fast paced flow of the game. If you catch yourself outside for longer than you expected in a particular difficult fight, you’ll find yourself running out of oxygen and slowly dying. Even if there is a particularly annoying jump puzzle that’s taking more attempts than you thought, you then have to stop what you’re doing, find somewhere to refill your OzKit and then go back to it.  This amounts to an annoying and unnecessary mechanic.

There are other issues as well.  Enemies occasionally clip through the floor or walls, characters are prominently introduced only to be seemingly forgotten, and then there is the writing. Borderlands has never had amazing writing by any means, but the series has developed some excellent characters. General Knoxx from Borderlands 1 is a huge stand out, as was Sir Hammerlock from Borderlands 2. In this game the writing has no subtlety whatsoever, everything is just a huge sledgehammer so that you can’t possibly miss the point that they are trying to make. A good example is one of the first main support characters you meet early on, Janey Springs. She’s portrayed as a happy-go-lucky, down to earth and generally very upbeat character. Then in the middle of a quest it they drop on you that she had a daughter that was killed by the local wildlife, without a hint of subtlety, and then it’s never mentioned again. There are number of other examples I could give you of huge details that just vanish into thin air as though they couldn’t be bothered to actually flesh anything out. 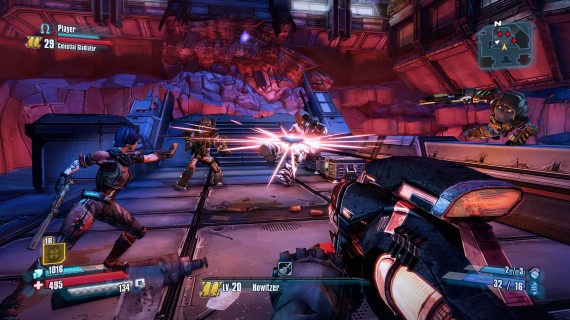 Borderlands: The Pre-Sequel does nothing that Borderlands 2 didn’t already do. Getting to see the story that takes place between the first 2 games, and watching the progression of Jack as a character is the highlight of the entire game. The terrible writing, the addition of a useless Oxygen system, and the fact that this is a full price game that adds nothing to the last game in the series, making this a downturn for the series. Unfortunately, you can never shake the feeling this should have been a Borderlands 2 expansion pack..  This is a game best for die-hard fans of the series or to be bought at a discounted price.

One Response to Review – Borderlands: The Pre-Sequel 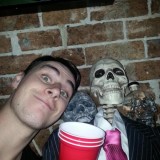