When we decided to send out our survey, we had very low expectations for responses. Not because our community isn’t awesome — you all are. Rather, we just didn’t think you’d want to fill out a survey. We were hoping 50-70 of you would respond, which would have given us roughly 10% of the Podcast audience. However, we had 246 responses! We couldn’t believe it. Thank you so much for your feedback. At this point, we haven’t yet crafted a full plan to address many of the points that you recommended, however one thing is abundantly clear, you want more KBMOD! I won’t go into all of the specifics of the analysis that I did, since I wrote a 10 page report on the results. Instead, I’ll share some of the results and what we plan to do about some of them, as well as how we plan to use the feedback to shape the future of KBMOD.

First of all, we have an incredibly loyal community. Of those 246 respondents, just over 200 of you have been with us for greater than 12 months. We know that’s just the tip of that loyalty though, since we see Twitch subscriber notifications that are greater than 24 months, and many of you noted in your comments in the feedback that you’ve been watching the Podcast since Episode 1. Your dedication is truly humbling and simply amazing. This does raise some concerns though, because we know that eventually you’ll drift away when we start playing different games or when you feel the Podcast just isn’t the same any more. With that in mind, we need to make sure we have more people always joining the community, because we want that Bropile to keep growing. Perhaps the new community members simply didn’t feel like they should take the survey. Hopefully the next time we roll one out, more of you will give us feedback. All of your feedback is valuable, even if you haven’t been around long!

We believe KBMOD is different than your run-of-the-mill Twitch channel or gaming news outlet, and the wide range of reasons for you coming to KBMOD truly reflects that. As you can see below, the Podcast is, unsurprisingly, the most popular, but you also are a huge fan of participating in charity events. It was surprising, though, that there was less interest in the couch stream since they are related. KBMOD plans to keep doing the couch streams because we learn so much from them, and because they’re too much fun to give up. From them, we learn what works well and what doesn’t, which will ultimately improve the quality of the Extra-Life LAN event. 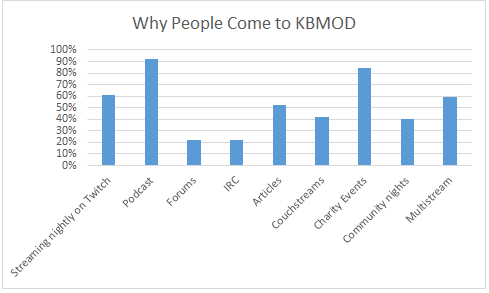 Since we asked how much you watch a specific streamer, we decided to turn that into something for us to track. We strongly believe all of our streamers bring something unique to the Twitch channel, so we needed to know how consistently you watch them. To that end, we created a score called Net Promoter Score which is calculated based on how much the community always or almost always watches a streamer vs. the number of people that rarely or never watch them. Dan is our most popular streamer, he scored 37 on this score which can range from -100 to +100.

Between the lower scores and the feedback for the streamers you don’t watch, we came to the obvious conclusion that the other streamers should be on the Podcast! We’re geniuses!  To be honest, we didn’t come up with the idea completely on our own, since a number of you suggested that or at least said that you had no idea whom those other streamers are. Between that and your responses regarding why you watch a streamer, it’s clearly pretty important to know the person if you’re going to invest your time into watching them.

Personality is the number one reason why you watch someone. However, you also said that the games they play some times override your love of their personality (isn’t Hex so cute when he dies a million times in Wings of Vi?) and actually stops you from watching them. So, the likelihood that you’ll watch results from the interaction between the games they play and their personality. I think this makes sense: some games, like D3 and Isaac, allow Dan to focus much more on the chat, while games like CS:GO require a lot more concentration and reduce his chat interaction. Speaking of chat interaction, a lot of you had a bone to pick with us about that, so we’re going to have to work on our chat interaction.

We aren’t solely a streaming website though, and more than half of you come to KBMOD for our articles. In particular, you really like our guides. The Build Guides are understandably the most popular, while the other generic other guides category was almost as popular.  Considering that and your desired rate of content, it’s clear to us that you prefer longer articles that take a more in depth look at a topic, rather than a cursory overview that you can get anywhere on the web, like Polygon or IGN.

Over all, the feedback was amazing. We can really tell that you are passionate about the site and being a member of the community. A number of you actually asked to do streaming, do some writing, or more generally help with KBMOD. That’s awesome, though we haven’t figured out how or if we plan on doing any of that yet. You apparently want KBMunch pretty badly but that’s something that might take away from streaming or content creation, so we’d have to really think about whether or not that’s a priority. Other feedback included a hardware Podcast, which we’ve already started with our Build Guide Cast – which we felt went really well and will be continuing to do and expand.

There’s so much more that you gave us and we haven’t figured out what to do with it all yet. We plan to use this feedback to flesh out the vision of where KBMOD will be in 2020. We will likely continue to send out surveys periodically to see how we move on streamer’s Net Promoter Score, so we continually improve to make us your number one place for PC gaming news, streams, and community! We love that you’re part of the bropile.