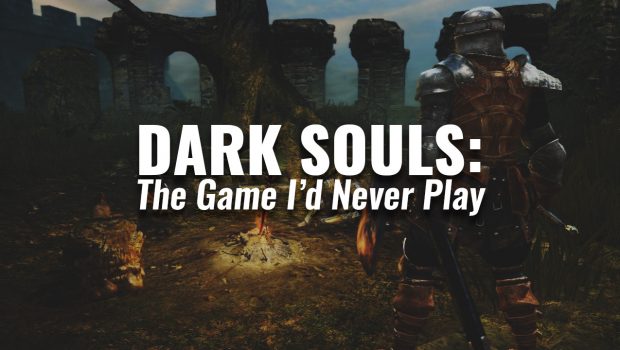 Molly aka GoodVibes is a KBMOD Stream Team member, Twitch variety broadcaster, Bethesda enthusiast, and veteran internet dweller. If you haven’t already, give Molly a follow on Twitter. Anyone can submit content to the site by following the process at https://kbmod.com/contribute/.

Like the title suggests, this is an article about how and why I am now a converted Dark Souls fan after playing the first game in the series. It may seem trivial but it’s kind of difficult to reflect upon and admit that. You see, for the longest time I glanced at other people playing Souls games on Twitch and sort of scoffed thinking, “Nope, that is not for me, I’ll never subject myself to that, no-sir-ee-Bob.” I’ve never been the type of gamer who suffers through super difficult suicide-hardcore-hate yourself game modes for the sake of suffering. In fact, I’ll turn the difficulty down to easy if I’m struggling on a level with no shame whatsoever. Dying over and over and getting frustrated and making no progress just isn’t my idea of a good time. I’m also not a fan of melee combat; if given the choice I’ll always choose ranged over it. However, a good friend of mine, Eric (@faucius on Twitter), kept nagging at me for a good year or so to give it a try and I kept turning him down thinking he was delusional.

Then the St. Jude PlayLIVE event came along, and I decided to kick off my campaign to raise funds for the event by subjecting myself to a couple hours of torture. I figured everyone would get a kick out of my frustration because I’ve been very vocal to my viewers about never playing Dark Souls. Ya know, for the kids. I went into the stream thinking I’d most likely never pick it up again but, hey, at least I could say I gave it a good try. 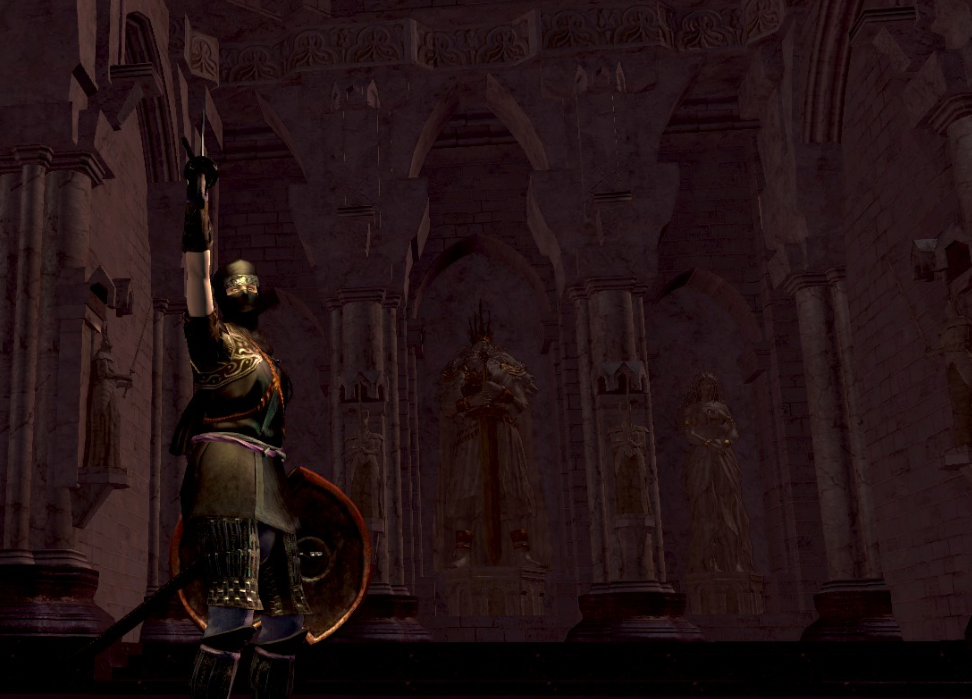 For the most part, my first experience wasn’t anything life changing. I ended up not hating it as much as I thought but I also wasn’t excited to continue in any way. I got past the the Asylum Demon with relative ease, on my second try even, and progressed through the Undead Burg all the way to the Taurus Demon. That’s where I got stuck and where I ended the stream. After the stream I went online and researched ways to get past the Taurus Demon and found a really cheap strategy of climbing up a ladder and bonking him on the head as he jumps up to fight me, then rinsing and repeating. On the next stream I tried this strategy and it worked, and because I have no shame making a game a better experience for myself, I felt pretty good about it. Like, “take that ya stupid game!” But I still wasn’t convinced I’d continue with this nonsense. That’s when I made the mistake of looking up a guide and everything started to snowball. I discovered the Dragon Scale sword and properly learned how to parry/riposte and suddenly I was mowing down NPCs I had been struggling with, even Black Knights, with ease. Maybe the Dragon Scale sword is too OP of a weapon for a noob like myself to discover early on but my. play-style. is. cheap. So it made the whole game enjoyable for me and was a huge reason I got sucked in. I’m still playing mostly blind, only looking up guides when I get stuck, but I now have to admit I really like the game and am a believer.

Here are some reasons why:

In most games, you come across an enemy you can’t defeat and it’s usually because they’re too high of a level. So you grind and come back with stats that allow you to one-shot or one-hit that enemy, or something similar. Take for example the Deathclaws in Fallout, my all time favorite game series. Coming out of the vault a Deathclaw will toss you around like a rag doll so you avoid them. Later on with your power armor, higher health meter, and sniper rifle that does leveled damage with your character, you come back and anyone in your scope is toast. That’s not the case with Dark Souls. Yes, leveling does help a lot as well as getting better gear, but the combat is so much more than that and quite delightfully complex. You’re not meant to grind until each boss only tickles you when they hit you — that’s not possible. You’re meant to discover which combination of parrying, rolling, dodging, and blocking counteracts the boss’s set of moves and attacks. I don’t mind dying often in this game because with each death you learn something new and you add more skills to your arsenal of understanding the gameplay mechanics. This is why the game has kept my attention. Although I’ve struggled with bosses where there are two entities such as the gargoyles and Smough and Ornstein, with enough patience and strategizing I’ve defeated every boss I’ve come across. That’s another thing; victory feels so, so, so good in this game, and I realized it feels very reminiscent to difficult retro games I played as a kid. I get the same feeling of accomplishment that newer generation games just don’t seem to give, and that’s fine. It was just a pleasant icing on the masochistic cake of sorts. 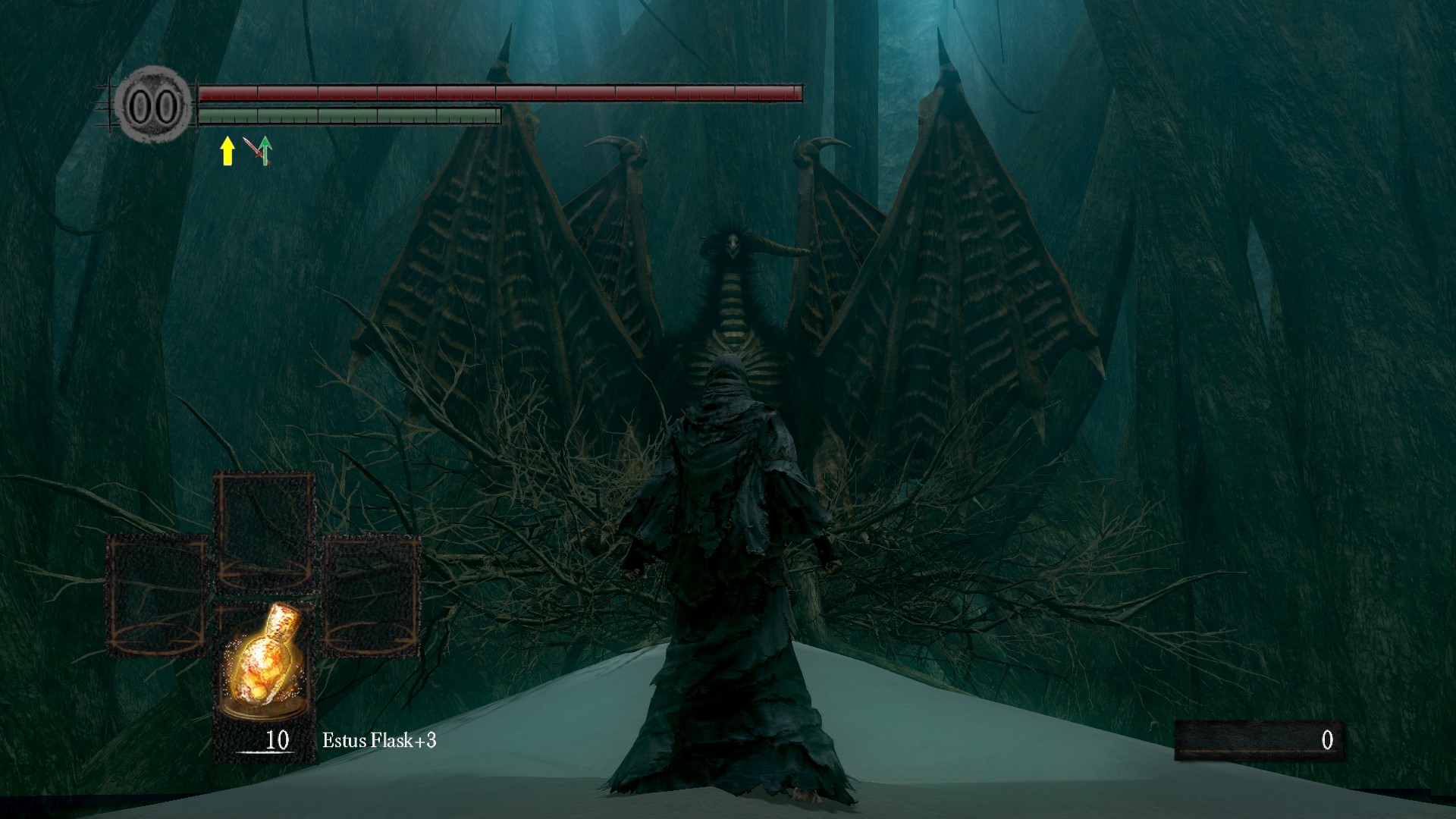 Which brings me to where I currently am in the game; I just defeated Smough and Ornstein after many, many tries. They may be the most difficult boss I’ve encountered thus far. Afterwards, I figured out I could have summoned Solaire of Astora to help and I was not happy about that, but finally having the Lordvessal almost made up for it. I plan on finishing the game, no matter what. I do get super frustrated at times but I’m enjoying the game too much to put it down now and I want to fully finish it before moving on to join the Dark Souls 3 hype train. I’ve heard enough about Dark Souls 2 to decide I’m going to skip it. Some people liked it, some people didn’t, but the consensus is I don’t need to play it. Eventually I’ll buy a Playstation 4 and defile my PC Master Race covenant to play Bloodborne, as well.

So there you have it, the story of a bitter, begrudgingly satisfied convert. If I had to review it, I’d give it a 4/5 and not a 5/5 because I’m too stubborn. Stupid game.