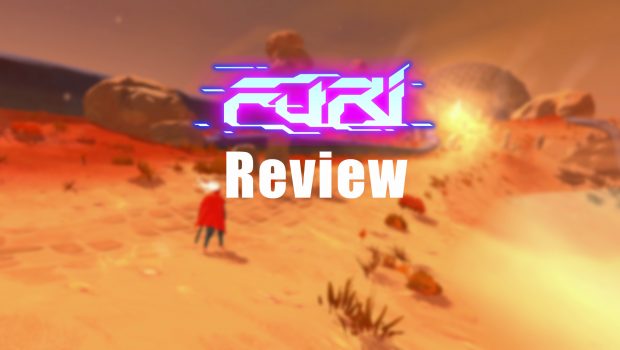 It’s been a while since I have played a game that I thought was truly challenging, and I have Furi to thank for breaking that trend. Furi is a twin-stick shooter with gameplay mechanics inspired by the bullet hell genre of games. The fast paced twin-stick shooting also shares the spotlight with some sword fighting mechanics thrown in as players jump from level to level taking on different bosses.

The challenge Furi provided was fantastic as it was very fair and only made me want to better myself so I could conquer each boss and continue on to the next. Not once did I think the game was being too harsh, as the hurdles provided were very clearly telegraphed and the combat was very rewarding when executed correctly. For example, when successfully parrying a melee attack the player is given some health in return that they may have lost earlier. Another huge thing about the combat is that it is really satisfying! A great example of the satisfaction is how I felt when I landed a Perfect Parry on an opponent. Perfect Parries occur when the player blocks a melee attack at the last possible second and it initiates a short animation where the main character just goes to town on the boss. Nothing made me want to yell out in triumph more than when I got these short, but sweet animations.

Now, I realize I’m talking about melee attacks a lot in a game that seems to be mainly a bullet-hell game, but this is because in Furi the two major gameplay aspects are the two types of combat initiated during a fight. Bosses have multiple phases, and each phase tends to start out with a bullet hell portion where the whole arena is used with projectiles flying every which way and some close quarters combat taking place every now and again. However, after clearing out the bullet-hell portion of a phase the dueling portion is then initiated. In this section there is a much smaller ring that surrounds both the player and the enemy; only sword fighting takes place here as the player is unable to use their pistol, and just like the rest of the game the duel is very fast paced. The dueling got my adrenaline pumping whenever I entered with relatively low health because I knew if I was victorious my health bar would be refilled and the next phase would commence. At the same time though, I also knew that if I failed I would be sent back to the beginning of that phase with one less life making the stakes rather high. 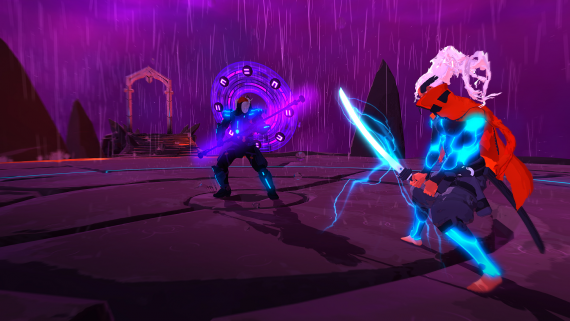 The amount of variety found in Furi is just astounding, with new mechanics pleasantly surprising me in every battle. The variety can be found in something as little as a boss using a previously seen attack in a different way to something as big as a whole boss fight being something new entirely. For example, one boss fires multiple projectiles that follow the player that can be taken out by shooting at them, while another fires only one of that same projectile, but it can be reflected to damage the boss instead.

The differences aren’t limited to just gameplay as Furi gives all of the characters very unique personalities. Using these personalities, a great story comes together that begins with the main character being released from his prison cell by a mystery man that dawns what seems to be the head of a rabbit. He then says, “The Jailer is the key, kill him, and you’ll be free.” With this cryptic message the player then walks forward into the first boss fight. This mystery rabbit character moves the plot along by accompanying the player giving them information about the upcoming bosses and his personal view on some of them. The story is told and paced very well through this method, and without spoiling anything, I do want to say that near the end I was really sent for a loop.

The amazing gameplay and great storytelling is all accompanied by a bright cell-shaded art style and a killer synth soundtrack made by talented artists such as Carpenter Brut. The gorgeous art style does a great job of setting tone with the brighter, more alive colors creating a peaceful setting and the darker color choices setting much darker moods. The soundtrack compliments these tones as it seemed to play slower music in between fights where the more peaceful colors were displayed, while saving the more intense beats for hectic encounters with bosses that tended to have much darker color schemes. 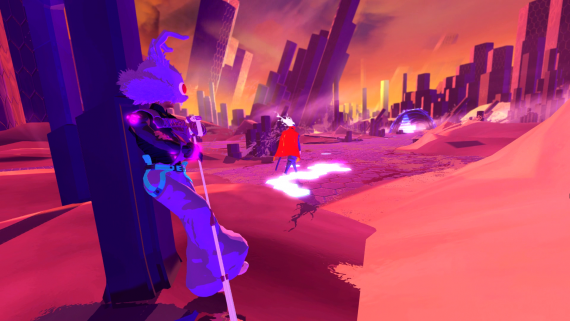 Another huge plus to Furi is the fun doesn’t just stop at one playthrough. It has a few different endings along with new modes for replayability. After clearing it for the first time, the Speedrun and Furier modes are unlocked. Speedrun is what it sounds like, as it is just a race to see how fast you can beat all the bosses consecutively. This mode in particular has added lots of extra playtime for me as I’ve been trying to actively climb the leaderboard. Furier is the story mode again, but this time it’s much harder with all of the bosses getting new, stronger attacks at their disposal. It is definitely not necessary to play these modes to enjoy this game to its full potential, but they are nice additions for those who aren’t ready to put it down just yet.

Putting Furi down is something I won’t be doing any time soon, though, as I enjoy this fantastic game a lot. Its great blend of hack-and-slash and bullet-hell mechanics is what makes the gameplay very difficult, unique, and fun. This combined with the beautiful art style, amazing soundtrack, and well written story makes this game a memorable experience and one I’d definitely recommend to anyone looking to try something new.

Summary: A challenging hack-and-slash bullet-hell hybrid that will test your skill only making you want to improve to face the difficulty head on. There is lots of fun to be found in both the core gameplay and the satisfaction of conquering the enemy.